BOOK BLITZ: The Assassin and the Soldier by Carly Morgan #GIVEAWAY 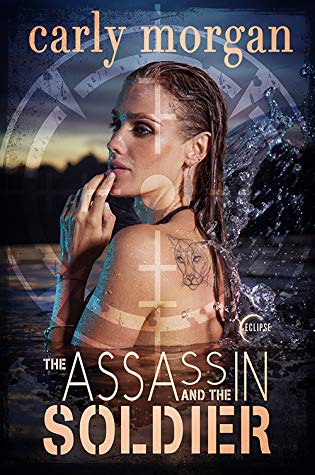 Has she finally met her match?
During a time of political unrest, convicted assassin Kaelia gets a chance to win back her freedom on a reality TV show competition. Released temporarily from prison, the twenty-two-year-old is given fancy digs in a hotel and her very own personal trainer, Callan.
But Kaelia is harboring a secret: she isn’t like other people. Spliced with the DNA of some of the most predatory animals on the planet, Kaelia was grown in a lab as an embryo and possesses heightened strengths and abilities. She’s confident she will win the competition, and can do so without the likes of Callan Merone ‘training’ her.
But Callan, an ex-soldier for the totalitarian political party that imprisoned her, happens to have the very same secret. Eventually fed up with Kaelia’s arrogance and devil-may-care attitude, he turns her over his knee. For the first time in her life, Kaelia realizes there is someone in the world who can overpower her – and the idea is more arousing than she ever thought it could be.
Publisher’s Note: This steamy dystopian romance contains elements of power exchange.

Goodreads / Amazon
—
EXCERPT:
“Stop, stop!” she cried at last, and her hands flew back to cover her hot bottom, the backs of them crisscrossed over one another across the center, forcing him to pause her spanking. “When will it stop?”
Suddenly he recalled what she had asked him earlier regarding the duration of her spanking, feeling immensely satisfied. Instead of the bratty tone she had taken before, this time, her words echoed with pleading forlorn desperation. Callan had a very strong hunch she’d never felt so overpowered and humiliated before in her life. He wondered if she’d had enough, after all, a wavering heat rose off her bottom and it was obviously tender to the touch. But no. This was the part when her lesson would really begin.
Gathering her wrists in one of his hands, so incomprehensibly large in comparison to her own delicate fingers and slender palms, he tucked them both away between his belly and her side, holding them there. Then he repositioned her, as she had flopped around quite a bit during her struggle to escape her spanking. Clutching her around her tiny waist, he propped her up on one leg while he clamped the other one down over her thighs, feeling her whole body tense in response. Then he lifted her bottom up higher, so that the rest of her hung at an even more severe angle, and bent low over her back to speak.
“It will stop when you learn how to be a good girl,” he said, his voice low and nearly taunting. His fingers grazed over her bottom, so very flushed and warm with heat, and then found them hovering over the hem of her panties again. Oh, modesty be damned, after the way she had acted, she very much deserved this spanking on the bare. With one swift tug, he whisked those panties down over her plump cheeks, leaving them to bunch into the crevice around her thighs.
Her whole body bristled as Callan took in the wonderful sight of her wholly naked ass, admiring the color he’d put on there with new appreciation. Her bare cheeks clenched and relaxed, driving him crazy with a desire he’d never truly known before. Suddenly, he couldn’t control the vision of his penis, hard and fully erect, plunging deep in-between those two, quivering cheeks. Callan could just barely see the soft lips of her vulva, slick and glittering with moisture. His breathing quickened and he was pretty sure he felt hers do the same.
“No,” she started to say, her voice barely a squeak, but Callan cut her off as he smashed his hand down over her pink, swollen cheeks, distracting himself from where his mind was attempting to go. He spanked her as if he were hammering a post into the ground, alternating his smacks to cover her whole, jiggly backside, and then concentrating on one spot for several moments to really drive the lesson in, listening as her cries intensified during those intervals. The pink shade very quickly gave away to a muddled maroon, and Kaelia wailed long, guttural, piteous sounds of remorse.
GIVEAWAY!
a Rafflecopter giveaway