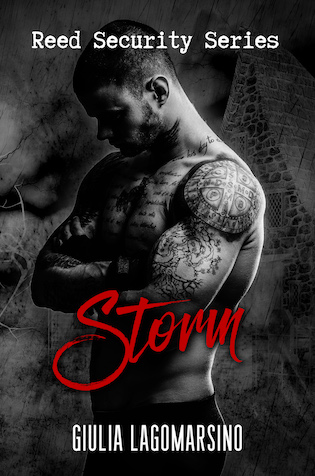 Storm is book 18 in the Reed Security Series and should be read in order.
Storm
I had one job, get Jessica “Rabbit” Finley to sell her property to Reed Security. I could do that. I was Army Strong. Hell, I took down bad guys for a living. I could handle this sexy vixen. No problem. Except, she’s a little crazy. She thinks that there are ghosts on her property, and she has the men at Reed Security believing her too. But then I found out her history and it had me wondering….Was she really crazy?

Jessica
I’ve never known who I really am. My family history has been contorted into something that I can only hope to unravel in my lifetime. But then I got a clue that led me to buy this creepy insane asylum. I was told there were answers here and I’m finding them, along with ghosts that still haunt this estate. There’s an upside, though. There’s a sexy man here to keep me company. But the closer I get to finding my answers, the closer I get to being locked up in the asylum myself.

—
EXCERPT:
“Can I just point out that she’s not actually my woman?”
“Yeah, she should be my woman,” Tony grumbled.
“Can we please forget about the fucking thumb war? Face it, you lost. You won the battle, but lost the war. It’s over for you.”
“I wouldn’t be too confident right now if I were you,” Coop said. “I think right now she’d take Tony Tacos over you.”
“There has to be some way to prove to her that it was a one time mistake. Okay, let’s just say that I wanted help getting her back. How would I go about this?”
“Well, you have to prove to her that you are good in bed,” Hunter said. “You are good in bed, right?”
“Well, it’s not like I’m gonna prove it to you,” I grumbled.
“He’d be the one you’d go to,” Cap chuckled. “Hey,” he said, holding up his hands as Hunter advanced on him. “Wax jobs, watching people fuck, thongs, pedicures, and hot tubs. I’m just saying.”
“That wasn’t all me,” he growled.
“Doesn’t matter. Enough of it was,” Cap laughed.
“Can we get back to my issues?”
“You know what you need?” Coop said. “You need a sex tape.”
“Excuse me?”
“Yeah, you know, to prove that you can do it the right way.”
“And who exactly would be filming this? And who would it be with?”
Coop scratched his jaw and shrugged. “Okay, well, unless you have any in storage, that won’t work so well, but there’s gotta be something you can do that will show you’re not a total douche in bed.”
They all stood there staring at the ground in thought. “Really? Maggie went to you with this issue and this is who you brought me?” Cap opened his mouth to speak, but I held up my hand to stop him. “You could have brought me Sinner, the lady killer. You could have brought me the man who made his woman think he was a superhero. Hell, you could have brought me the stalker, but no. You brought me the guy who won the thumb war, but still lost the girl. You brought me the man who has a sixteen year old, but no woman. And you brought me the man who fights with his woman for a living.”
I turned and headed for the door, determined to figure this out on my own.
“Hey!” Cap called from behind me. “I showed up.”
“Yeah, the man that’s hanging onto his woman by knocking her up repeatedly. Don’t think that’ll work here.”

I'm a stay at home mom that loves to read. Some of my favorite titles are Pride and Prejudice, Harry Potter, Lord of the Rings, and Horatio Hornblower. I started writing when I was trying to come up with suggestions on ways I could help bring in some extra money. I came up with the idea that I could donate plasma because you could earn an extra $500/month. My husband responded with, "No. Find something else. Write a blog. Write a book." I didn't think I had anything to share on blog that a thousand other mothers hadn't already thought of. I decided to take his challenge seriously and sat down to write my first book, Jack. I was surprised at how much I enjoyed writing. From there, the stories continued to flow and I haven't been able to stop. I hope my readers enjoy my books as much as I enjoy writing them. Between reading, writing, and taking care of three small kids, my days are quite full.