THE WATCHERS REVENGE
The Watchers series, Volume 2
by Chris Shuler 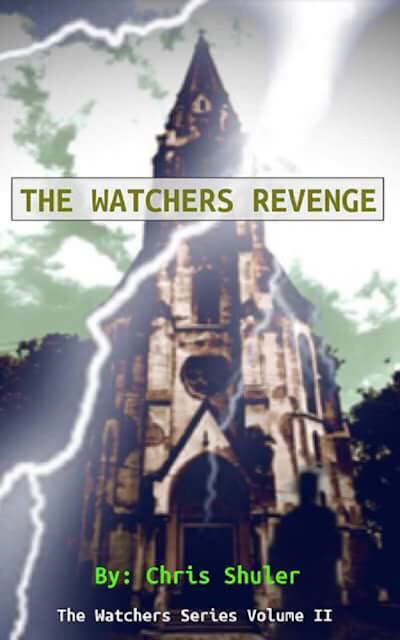 After the events at South End Church, Topher and Shannon discover a message that they are not the only Archangels in the world...they must follow the clues and try to bring them into the fight against Azazel and Ashley thus the Prophecy continues! One will live….one will die...and only one will survive!

I hit another table then heard a table nearby me move. Then another. Then another. Whatever it was it was closing in on me. Tables were now flying around the room some were toppling over. I heard Jordan scream behind me and David yell, “Topher! Get out of here!”

When whatever it was got within a few tables of me I started to hear a lower guttural growl. Turning in the direction of it I instinctively raised my arms to my face thinking it was some sort of dog coming at me. As my arms crossed across my face I caught a glance of huge shadow of something hairy leaping at me. Its weight tossed me down across a table and slide me to the edge and topple over the other side. I felt a hot breath bearing down on me mixed with a harsh growl. The weight of whatever it was crushing the air out of me. As my arms were locked in front of me I saw a glow come off my wrist. Kithara. She was glowing now. It lit enough I saw the grotesque animals face staring down at me. It was not like anything I've ever seen. This was a dog from hell. It was evil and twisted and was doing anything it could to kill me. Fangs snapped at my face above my locked arms its spit was splattering on my face. When Kithara touched its fur she singed its skin and yelping in pain but it didn't lose its focus. Redoubling its effort it tried to force itself down to my exposed face. David and Jordan screamed across the room trying to figure out what was going on. Ashley was close by laughing at my impending death.

David held up a finger and said, “I will be right back.”

After a few silent moments, he returned placed a long case on the table in front of us. He flipped the two latches and opened the top and inside was a sword. Its hilt was pewter and blade a dull gray with beautiful designs from the tip to the handle. Once I laid eyes on it the sword sang to me. It echoed through my soul.

“Oh my God,” Shannon whispered. “Is that what I think it is?”

“I….do not know,” I whispered without taking my eyes off it. “I'm afraid.”

Shannon took my hand from across the table. “Topher, don't be afraid. I'm right here.”

I nodded to her, I loved her, she had been my guide throughout this and has never steered me wrong so I trust her.

Looking back down to the sword, I reached out my shaking hand and touched the hilt. It felt warm to me instead of the touch of cold metal. Once I took the hilt into my hand the song in my soul became loud and beautiful. It was like something turned on inside me that had laid dormant forever and was now fully awake. A hum rose and wind circulated around us. Jordan whispered, “Jesus, Mary, and Joseph. It's true...he is really Michael and that's Kithara!”

After the death of his father, Topher and his mother have moved to the small town of Newfoundland, so now Topher must face a new school, a new town, and new friends. Soon after settling into his new school he discovers that Newfoundland and his new friends hold a secret….a secret that thrust the weight of the world onto his shoulders and he must face the greatest evil the world has ever known…..

Father of 2, writer, car sales man....this is my story