XMAS IN JULY ROMANCES
We Wish You A Ferret Christmas, Scrooge You!, and It's Always Something
by Nikki Lynn Barrett 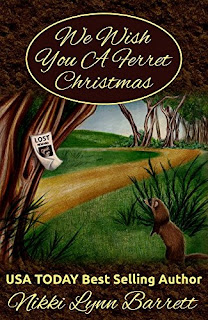 WE WISH YOU A FERRET CHRISTMAS

One lost and found ferret may bring two broken families together this Christmas.

Widower Lance Rossiter is struggling this holiday season. His young daughter is recovering after an accident. The first thing she asks for when she's able to talk again is her lost pet's whereabouts- the very same one Lance blames for the accident...

Cara McLean is still dealing with her feelings about her son's recent diagnosis. The widowed mother of two very different kids feels like she's coming apart at the seams. When her son attaches himself to a stray ferret, the situation brings her closer to Lance and his daughter.

The pair quickly learn they have a lot in common and form a deep emotional bond, but neither can let go of the insecurities from their past. They're forced to reevaluate the things that haunt them before the shot of a future together is shattered.

Lance enjoyed the 'Watching Cara' game. Actually, her habits and gestures were hard to peg. So she could get him correctly. Was it the way he tucked in his shirts? The slacks? He debated on asking her what gave it away and how she guessed him to be organized.

The one thing he noticed about her was she always looked around nervously, very aware of her surroundings and the people. “You're either a people watcher, or you're nervous about something.” He blurted.

Cara stopped picking at the tomato slice hanging from her sandwich and narrowed her eyes. “Is this you trying to peg me?”

“A little. I notice this because I'm trying to peg you.” He smiled, hoping to lighten the mood.

“I'm a little of both. I watch people for their reactions, and I am nervous for several reasons.” Her cheeks reddened. Lance loved the way he easily made her blush, not that he meant to do it.

A heavy silence fell over the table. Cara scanned the deli before facing him again. “Force of habit. I guess even when he's not around, I watch the people around me because of how Alex is at times. I've had several rude comments about his behaviors. Until you pointed it out, I never realized how much I do this.” Setting her food down, Cara sat up straight. “Now I feel all weird.”

“Wasn't meant to make you feel weird. I'm sorry if that's what happened. I was just trying to find quirks about you.” 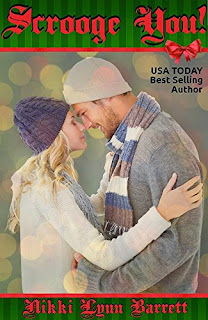 After a nasty public break up, actor Kevin Wright returns to his small Nevada hometown for his baby sister's wedding. Dubbed as “Scrooge” by his ex girlfriend's slander, Kevin's life and career are on the verge of being destroyed. He'd give anything not to have to tell the truth of what really happened, but staying silent may not be the answer.

Sasha Moretti has big dreams, but is weighed down by the lack of funds to get her ailing father into a facility that can provide twenty-four hour care. He's all she has, but he isn't getting any better. Taking care of him at home is proving to be harder with each passing day. After several run ins with Kevin, the boy she loathed in high school, an opportunity arrives that Sasha finds hard to turn down...

Between the holidays and a wedding, there's a little madness and magic in the air. Romantic feelings develop between Kevin and Sasha, but when the truth is spoken, can they both get past their demons and let a little love in their hearts?

Kevin left her completely flabbergasted. He was so...Kevin! Sarcastic, sexy, sweet, lovable, and so much more. The fact that he was honest and sincere tugged on her heart. She had him figured out all wrong back then. Becoming an actor hadn't changed him, either.

People were staring. Big time. Some whispered to each other, and some pointed. One woman even started walking toward them, then changed her mind.

“I think you're being noticed today,” Sasha whispered to Kevin.

“Or maybe it's you. It's not often I have a gorgeous girl on my arm.” He winked and kissed her cheek. He was being very touchy feely today. Sasha would almost think it was for show, but Kevin did it privately as well.

They fit. The two meshed so well. Two misfits in a world of confusion and change. Her future was uncertain, while Kevin's only went up as time went on. Could they make something work? Sasha's feelings for him grew stronger, especially with his genuine concern over her life.

“What do you think of this one?” He pointed to a tree which barely had any limbs on the bottom. It was tiny, maybe about four feet. The tree reminded her of herself, someone who never bloomed.

“Are you messing with me again?” Sasha asked.

“This tree needs a home. Look at it. He's lonely. The droopy limbs here? It's because the tree is hunched over in sadness. No one wants to take it home.” Kevin actually ran his hand along one of the limbs in a petting motion.

This man was damn convincing. Kevin's words tore at her, making her care about the stupid tree as if it were alive. Well, trees did live, but... Damn him. She was a sap!

“I see it in your eyes. You're contemplating.” Kevin moved behind the tree. “Take me home, Sasha. Love me! Love me!” Then he gently shook the longest limbs, trying to reach out for her. “Hug me! Decorate me!”

“Oh my God! Stop! We'll take it!” She laughed, clutching her stomach.

Kevin peered from behind the tree, flashing that gorgeous smile again. “Aren't I a stinker?”

“Yes!” She hugged him. “A kind hearted, annoying, and funny one!”

“I'm glad you said kind hearted first.” He tousled her hair, holding her close. “Now let's go take our new tree home and spiffy it up.” 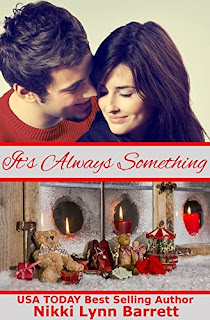 This isn't your every day sweet holiday story. Between mishaps, crazy work schedules, and giving back to others, this wild ride is full of the unexpected.

Christmas. The magical time of the year where you spend it with your family. Go out and do a little holiday shopping. Spread the Christmas cheer. Cherish the memories and your loved ones.

But when you're famous celebrity couple Tucker and Quinn McGinnis, things don't always go as planned. This year, they want more than ever to spend their first holiday together, but their celebrity status has them pulled in a thousand different directions.

When marriages are crumbling all around them, how does this newlywed couple manage to keep things going when it's always something keeping them apart?

Tucker covered her hand with his. “A few weeks left. We just have a few weeks, and we can go home.” Home to a house full of memories. Full of love. Memories of bringing Quinn there the first few times consumed him. How in awe she'd been over his awards. The guitar lessons which started their friendship in the first place, until Piper needed guardians and he'd gotten ahead of himself and blurted that they were getting married.

No regrets. He had absolutely no regrets letting this woman in his life.

She slapped a hand to her head. “Listen to me, I sound like an idiot. You know what happens when I'm left alone to my thoughts. It's not easy being a celebrity couple. After hearing about all these break ups, it makes me wonder. Is love enough? Can a couple survive on it?”

“Aww, darlin'. Is this because we're seein' each other on weekends right now? I can't speak for other couples, but love is more than enough. You're it for me, Quinn. You're what keeps me goin'. I get dang lonely when I'm not holding you close to me at night, but I go through what I need to because I know I have your love and support. Whether it be five days or five weeks, when I know I get to see your smiling face, it means everything.”

Hearing her doubts, Tucker knew he needed to find a way to get the two of them some quiet time. Away from the responsibility of life, careers, and things they'd committed to. Was she feeling this lonely and worried all week? For Quinn to express her vulnerability this way after they'd been so strong together, he had concerns. 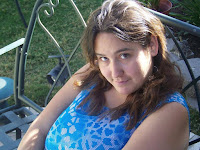 No matter where she goes, USA Today Bestselling author Nikki Lynn Barrett hears voices in her head. Instead of calling her crazy and locking her up, her family realizes it's just a product of being an author and allows her to write the stories so that the voices shut up.

But they don't. And probably never will. There's no need to lock her up, Nikki knows she'll never escape the voices, not until each and every last story is written. And for every story she writes, about ten or more ideas pop up.

When she isn't slaving away at her computer writing books that will probably make you cry and keep you in suspense, Nikki plots to take over the world one book at a time. What? It's a sickness. One she can't escape!

Books aren't her only addiction, though. Nikki can be found making up parodies to drive her son crazy, and bantering back and forth with her husband, who somehow manages to steal her away from the fictional world she lives in all the time.

Nikki lives in Arizona with her husband and son, where she can be found using every creativity outlet she can find through music, photography, handcrafted things, and random interests that she may pick up from time to time.

If you want to learn more about the author who makes people cry for a living, check out her website.