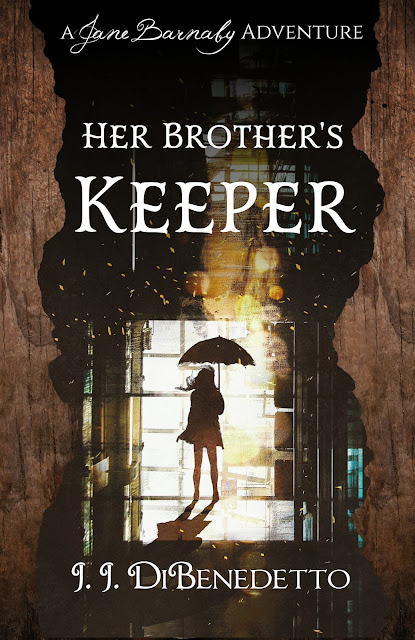 Jane Barnaby has planned the perfect Christmas vacation. Her father and his fiancé are joining her in Spain at her archaeological dig. They’ll see her work, meet her mentor, and they’ll all enjoy a few days of sunny Mediterranean beaches in the dead of winter.

But it all falls apart when Jane’s annoying (younger?) brother tags along and lands in jail for a crime he didn’t commit.

To clear her brother’s name, all Jane has to do is chase a wily female con-artist across Europe, catch her, and confront the woman and her accomplices. Oh, and outwit an ex-KGB agent and his personal goon squad along the way.

God, I wish you were here. Not just because I miss you, although obviously I do. And not just because this is yet another Christmas we’re not spending together, which is kind of ridiculous when you think about it. We’ve been dating for three years now, and we still haven’t spent a major holiday together. That’s just not right.

The biggest reason I wish you were here is that, if you were, I wouldn’t be where I am right now. Which is on a plane headed to Vienna.

I’m sure you’re asking yourself right now, “Why, Barnaby? What are you doing flying to Austria?”

Well, I’m flying there to try and find a Russian woman possibly named Natasha who seduced my brother, drugged his drink and left him behind as a patsy for the police to find while she stole jewelry from a princess. Aren’t you glad you asked?

If you were here, you would have been with us at the hotel, and you would have warned my brother away from Natasha. By the way, I refuse to believe that’s her actual name. Does she have a partner named Boris, too?

Does she fight a moose and a squirrel every week?

It should have been a simple job. All archaeology student Jane Barnaby had to do was pick up a box her professor needed and deliver it to him at his dig site, along with his new car. Yes, his office was in Oxfordshire, and his dig site was in Spain, a trip of 1,400 miles across three countries and two bodies of water. Still, it should have been simple.

And it was, until Jane discovered she picked up the wrong box by mistake. Not the one with boring pottery samples, but instead the one with priceless ancient Egyptian artifacts. The one that a team of international art thieves is after.

Now she’s chasing – and being chased by – the thieves. And she’s picked up a pair of passengers who claim they can help her outwit them, get her professor’s pottery back and return the artifacts to their rightful owner. If only she could figure out which one of them is working with the thieves and which one she can trust in this high-stakes game of finders keepers.

Jane Barnaby had everything going her way: a prestigious internship at the Museum of Natural History, a fantastic Upper West Side sublet apartment, and helping plan her newly-engaged college friend's wedding.

Until a casual lunch with her friend’s fiancé set off alarm bells, and sent her digging into the rabbit hole that is his past.

When that rabbit hole leads Jane and her on-again, off-again boyfriend to the English countryside, uncovering secrets dating back to World War 2, searching for priceless art treasures looted by the Nazis, and fighting off the thieves who will kill to get those treasures for themselves, will they discover the truth, or lose their lives?