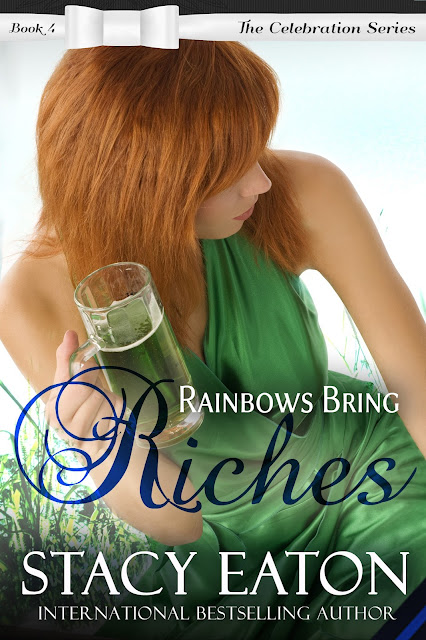 Welcome to the fourth book in the Celebration Township Series, Rainbows to Riches. This series consists of thirteen novel and novellas that take place over the course of a year, beginning with Christmas. During that year, twelve more stories will unfold in the Township of Celebration, Pennsylvania, and each release will coincide with an upcoming holiday. 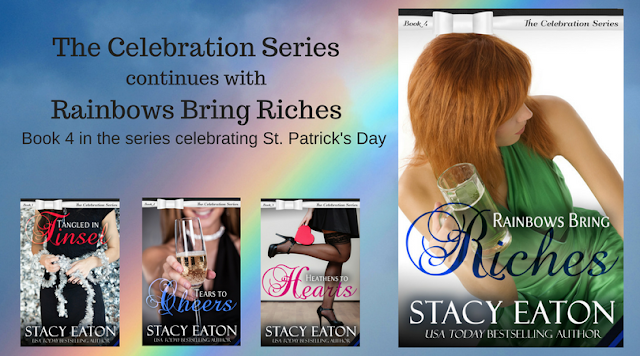 The announcer started the bidding at one hundred, and Shirley raised her hand. She better bid on me, she’s the one that talked me into being here. I knew that if she won, she wouldn’t even want a date, she’d only want a free dinner at the tavern for her and Fred Maxim. Of course, she’d insist that I eat with them, and I liked that idea. No fuss.

Another woman raised her hand and bid two hundred, and I squinted into the audience to see who it was. She was seated in the shadows on the other side of the bright lights, and I couldn’t make her out. Shirley bid three hundred and I figured that would be the end of it, but then the woman I couldn’t see stood and shouted loudly, “I’ll take him for a thousand.”

The room went dead silent, and I was honestly waiting for her to say, Oh, I’m sorry, I take back my bid, but the announcer called out that I was sold for one thousand dollars. I was speechless and stared into the crowd to see the crazy woman jumping up and down and screaming her excitement at having won.

Did the woman think she was bidding on someone else? She did know I was the prize, didn’t she? I started to descend the stairs and by the time I reached the bottom, this whirlwind of bright red hair threw itself at me and wrapped strong arms around my neck.

What the hell? Who was this woman? I didn’t know any ladies with hair this bright. I turned to ask for help from the guys on the stage and found them all laughing.

The woman finally unwrapped herself from me and landed on her feet in front of me. She was a pipsqueak of a woman, maybe five foot, if that.

“You have no idea how excited I am! I can’t believe I won a date with you!” She tugged me back towards her table while some of the townspeople laughed and whispered amongst themselves. “I have wanted to meet you for so long, and I can’t believe I won you!” She bounced a bit more as she reached her seat, and I gaped at her. “I can’t wait to go out with you. It’s going to be so much fun.”

“Wait,” I held up my hands to stop her prattling long enough for me to ask her a question: “Who are you?”

Welcome to Celebration Township. Casey Lowe is new in town and hiding from her past. Her next-door neighbor, Thad Wagner, is a sexy police officer, who is good with his hands, and his lips, but Casey refuses to get involved with a married man, and Thad can't seem to understand why she keeps pushing him away. No matter how they try to stay apart, something keeps drawing them together. When an unexpected visitor shows up at Casey's house the week before Christmas, her future is on the line. Will Thad figure it out in time to save her, or will Casey become a conspirator to a murderer? Tangled in Tinsel is the first book in the thirteen-story novella series that takes place in quaint Celebration Township, Pennsylvania. The rest of the series will begin to release in the fall of 2016.

Fourteen years later, Ian Dugan needs a break from life and ends up crashing his vehicle and waking up in the hospital to find Linda watching over him.
Can Linda forgive Ian for leaving her alone as a pregnant teen? Will Ian be able to forgive Linda and himself when he learns of the daughter he never knew about? Find out on New Year’s Eve if Ian can erase the tears and find something to cheer about.

Jason Hayes loves working as a nurse and living in Celebration Township—or he did until Riayn Simmers showed up in town, and a secret from his past is threatened to be exposed.

Riayn Simmers is shocked to find her college love-and the man she had called a heathen-residing in the same town as her aunt. Now Riayn needs to decide if she can handle sticking around to run her aunt’s bakery, My Baked Buns.


Missy Moresco might be Celebration Police Department’s police dispatcher, but she’s also got her thumb on the pulse of the township. When FBI Agent Casper Princeton shows up in town on a case, Missy and Casper go undercover to protect the real reason he’s there by pretending they are a couple.

With Missy’s snarky comments and Casper’s quick comebacks, these two find it hard to keep a professional distance. When Casper needs to rush home to a family emergency, Missy is torn on whether it’s a good thing or a bad one. Just when she decides it doesn’t matter, Casper shows up on her doorstep with his five-year-old daughter.

Can Missy and Casper keep the fake relationship going while they wait for his case to come to a head, or will his daughter and his job come between them before Easter arrives?

Stacy Eaton is a USA Today Best Selling author and began her writing career in October of 2010. Stacy took an early retirement from law enforcement after over fifteen years of service in 2016, with her last three years in investigations and crime scene investigation to write full time. Stacy resides in southeastern Pennsylvania with her husband, who works in law enforcement, and her teen daughter who is working toward her second degree black belt in Tae Kwon Do and on the choral and cheerleading squads at school. She also has a son who is currently serving in the United States Navy. Stacy is very involved in Domestic Violence Awareness and served on the Board of Directors for her local Domestic Violence Center for three years. 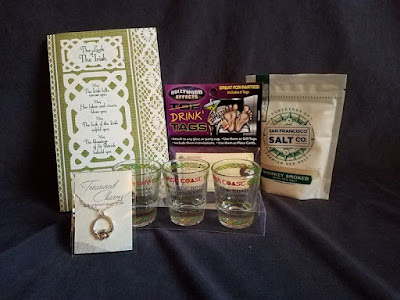