'Fourteen Shades Of F*cked Up' ! OUT NOW!

WARNING:
Very hot content & naughty stories inside. Read at your own risk.

Roses are red. So is passion. And blood.

Fourteen authors have brought you stories of pain and love.
Struggle and dissonance.
Lust and depravity.

Whether your poison is a naughty husband and wife, a kinky night out on the town, edging toward the pinnacle of pain and pleasure, or something a little more supernatural, come indulge in your deepest, darkest, most f*cked up cravings.

Note: This anthology contains content that inappropriate for readers under the age of 18. 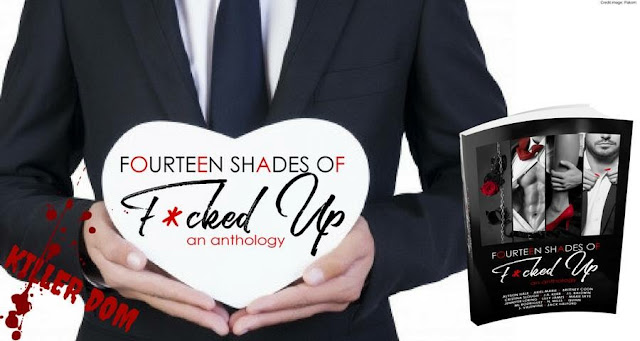 PETITION DENIED by Alyson Hale
A rich lawyer gives his beloved wife the punishment of a lifetime after finding divorce papers in the mail.

DARKNESS CONSUMED by Ariel Marie
An assassin's life is never easy--and neither is leaving the one you love in order to save them.

EXCITABLE by Brittney Coon
When a dominant is sold as a submissive to another dominant, a dramatic power struggle ensues.

CONSENSUAL by Cristina Slough
A couple tries to resuscitate their broken marriage by going to their first swingers party.

F*CKING ADDICTED by J.A. Kerr
Sex addict Aiden knows his attraction to fellow addict Keira is dangerous--but then, so is he.

FOREVER PROMISES by J.L. Baldwin
When the demons come out to play and stake their claim, there are always fatal flaws.

A STRANGE AND DISTANT SAFETY by Jennifer Loring
For one young man, the nightmare scenario of abduction and torture becomes the key to unlocking his ultimate fantasy.

WICKED GAMES by Lilly James
Lyle and Ivy live for their toxic relationship, but all wicked games eventually come to an end.

AFFLICTION by Marie Skye
A prominent doctor enjoys inflicting pain on his enemies, until he begins to question his original intent.

STORY OF US by ML Rodriguez
He is the first to introduce her to carnal pleasures she never dreamed of, but will he be the last?

HER MISTAKE by N. Mills
Dysfunctional: an adjective that embodies Jezabelle's entire childhood and everything she strives to avoid, until a smooth-talking biker ruins all of her plans.

MISS X by Quinn
She calls herself a "professional mistress"--no love, no commitment, no future, until she meets a strangely familiar man who shows her how to feel again.

KILLER DOM by S. Valentine
Sometimes lust can carry you down surprising and dangerous paths...

ANOTHER LAST GLANCE by Zack Halford
A terminally ill billionaire uses an experimental procedure to feel endless ecstasy, but all he really wants is one last moment with his true love.