L@@K at ME, I'm FREE! Murder in Vail by Judy Moore

MURDER IN VAIL
by Judy Moore 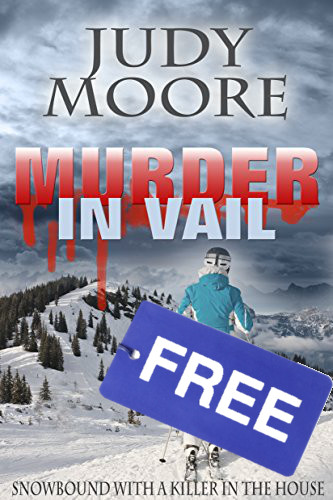 Sally Braddock’s serene lifestyle atop a mountain in Vail, Colorado, changes drastically each year when her three spoiled children and their spouses visit her – and her money – for Christmas. They live off their trust funds, which are disappearing quickly, and spend most of the holidays bickering and hitting up their mother for money.

This year, Sally makes an announcement that sends her children into a tizzy, an announcement so extreme that it pushes someone in the house to murder. The storm inside the house is matched by a raging blizzard outside, and the family finds themselves snowbound with a killer.

Thunder cracked and lightning lit up the room. She pulled the covers up to her neck, clutching the sheets. She lay still as a statue, paralyzed by the storm. Even with her entire family in the house, Sally felt afraid. The storm made the house feel so unnatural, so eerie.

Lying in bed, dreading the next bolt of lightning, Sally’s mind went immediately to the disaster of a dinner. I wish I hadn’t lost my temper, she thought regretfully. I wanted to break the news gently, not scream it at them. She remembered the shock and hurt in their faces and felt guilty. She needed to find some way of making peace, of calming everything down.

Another crack of lightning pierced the winter night, this one very close, and illuminated the room. Suddenly, she thought she saw the doorknob begin to turn. Then it stopped. Then it started again. Probably one of the kids, she decided, but the way it started, stopped, and then started again disturbed her.

“Is someone there?” she called out. The doorknob stopped turning, and she thought she heard footsteps scurrying away.

In January Jen Selinsky sat down with Judy to interview her, her books and everything author related. Visit Jen's website to find out more about Judy. 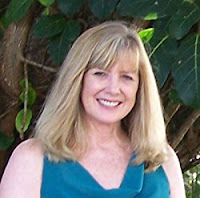 Judy Moore writes primarily mysteries and thrillers, as well as lighter family fiction. A longtime news writer, editor, and magazine feature writer, her fiction and nonfiction work has been published in numerous national publications. Her novels are published by BTGN publishers. A lifelong Florida resident, she is a former tennis pro and sports writer, so her stories sometimes have a sports backdrop. Her novel "Somebody Killed the Cart Girl" is a golf mystery, and her "Murder in Vail" is set on the ski slopes of Colorado. Her Christmas anthology "Christmas Interrupted," contains three popular novellas: "Airport Christmas," "The Holiday House Sitter," and "The Hitchhiker on Christmas Eve." An earlier novella, "Birds of Prey," and her new novelette "Football Blues," are also available on Amazon.