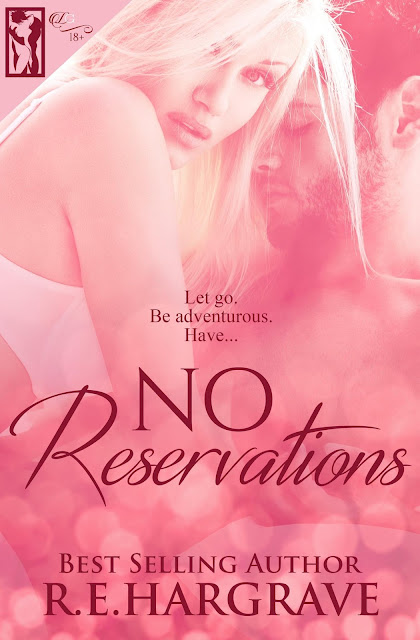 Selena and Dakota Derringer have been trying to get pregnant for a year without much luck. When their latest test is once again negative, they accept an invitation from old friends for an adult weekend away instead of letting it get them down.

Selena’s old college roommate Trinity Marshall, and her husband Joey, are both thrill seekers. In and out of the bedroom. When the couple suggest more than just wine and talking, will the Derringers accept their friends’ special proposition? What will come of their actions if they do?

Sometimes in life you just need to throw caution to the wind.

My hand shook while holding the little test stick between my legs. We had a good feeling this time considering my period was a week late. This had happened a few times in the past, but there was something about this time which had me crossing my fingers a little tighter. After tracking temperatures and scheduling appointments to have sex with each other, Dakota and I were hoping we would be on the way to parenthood at long last.

This month marked one year since we’d started trying to grow our family. I was beginning to think I shouldn’t have insisted on waiting the two years we’d put this off. Daks had been ready and willing to start the moment we were married, but he’d only been twenty-four at the time—fresh out of college—and I thought I’d known better than him what we needed because I was older.

At thirty-two, my career as a kindergarten teacher at Manteca Elementary was established. The reasoning behind my request to wait? I wanted him to have a couple years of freedom and adulthood before he buckled down to being a dad. Daks had enough on his plate getting his foot in the door as the school’s new music teacher. For over ten years, Mr. Carmichael had been the elementary music teacher, so staff and parents alike weren’t ready to see him retire. Dakota had his job cut out for him. A baby was the last thing he’d needed to worry about it.

Now that it was clear we were having trouble conceiving, I blamed my somewhat advanced age. After some discussion, we’d agreed to give it one year of trying the old-fashioned way before turning to medical intervention or discussing adoption. Daks and his sister Dylan had been adopted as infants, two years apart, from orphanages on opposite sides of the country. Though you wouldn’t know it seeing the bond they shared. I swear they were always having silent conversations; it was almost creepy. Dakota was a big proponent of adoption, for obvious reasons, and I had no doubts we’d go that route someday regardless, biological baby success or not.

Wistfully, I set the test on top of some folded toilet paper then set the timer. I avoided looking at the stick while washing my hands. To cool down, I splashed some water on my face then reached for the door. Daks was waiting for me on the other side with his arms open. His dark eyes were understanding, and showed as much worry as mine.

I gave him a nervous smile and went to him. His scent, like sunshine and sage, filled my senses while I nuzzled against his chest. Daks rubbed my back then kissed the top of my head.

“Tell me about your day, Selena,” he suggested, distracting me.

We moved to the bed. Daks got on and scooted back to the headboard before patting the spot next to him. He was still dressed for work, the pregnancy test having been our priority the moment we’d walked in the door. I stood there, admiring how good he looked. Dakota cut his brown hair extra short, keeping his curls unnoticeable, and trimmed his facial hair so that it accented his jaw line. His habit of leaving the top couple of buttons to his shirt undone was something I appreciated with regularity. It was fortunate for me that he had a nice chest and liked to show it off.

I climbed up beside him, tucking my feet underneath me, then returned my head to his chest. My hand splayed out over the soft cotton of his dress shirt, and I fingered a loose thread hanging from one of the buttons. “It was a pretty quiet day. I don’t think the kids realize they’re off next week.” I chuckled without much feeling. “Oh, and Trinity called.”

“Yeah? Everything okay? Are she and Joey having a good time in . . . where are they this time?”

“Yep, I guess. She invited us to come up to the Napa property next weekend.”

“But I thought they were on a world tour thing, and weren’t due back for a couple more months?”

Joey Marshall was an extreme bicyclist, and his wife, my best friend, had the fortune of being a freelance photographer for Sports Illustrated. Together they traveled the world looking for remote, and in my opinion insane, locations for Joey to ride while Trin recorded it all for posterity.

I shrugged, pressing the side of my breast into his muscled torso, which felt good. “All she said was that something happened while they were in Ireland and they decided to come home for a couple of weeks before picking the tour back up in Sweden. Anyway, they thought it would do us good to come have some wine, cheese and olives, and adult company. I believe her exact words were, ‘You two are overthinking this whole thing and just need to let go and be impulsive’.”

Trinity’s words had been no surprise to me. She’d always been blunt, loud, and on the lookout for the next adventure. Our sophomore year at UCLA, and second one rooming together, I became her next adventure. We were never serious about it; it was more of a friends with benefits situation. If one of us had an itch, and no current boyfriend, then we took care of each other. I’m not even sure that I could be considered bi-sexual as Trin’s kitty was the only one I’ve ever played with. Same went for her generous boobs—with the exception of my own, of course.

The egg-timer started buzzing in the bathroom, and I felt sick all of a sudden. My fist clenched the fabric of Dakota’s shirt, and I closed my eyes. “I can’t,” I whispered.

We shared a quick hug then I leaned back, freeing him to get off the bed. While he crossed the short distance of the room, I pulled my knees up to my chest and wrapped my arms around them, holding my breath until he stepped back out.

Dakota couldn’t make eye contact with me when he did.

“A weekend away sounds like a good idea,” he mumbled then staggered out of the room, leaving me to my hopeless tears.