RELEASE TOUR with #GIVEAWAY: The Beast Within by Jacquie Biggar

THE BEAST WITHIN
Mended Souls, book 2 by Jacquie Biggar 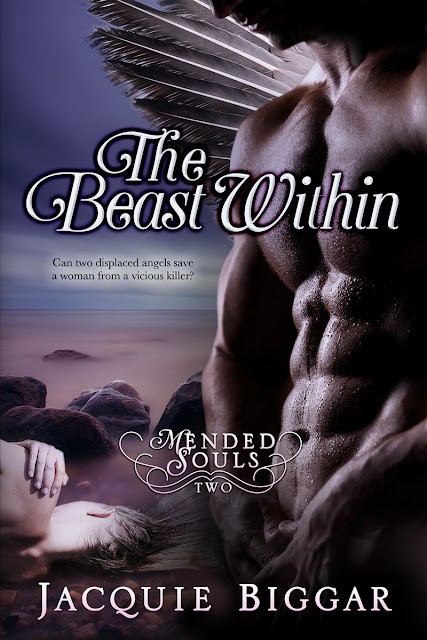 She didn't expect to land in the crosshairs of a serial killer.

Can two displaced angels save a woman from the clutches of a vicious psychopath?

When Julie Crenshaw is offered a news reporter's job on beautiful Vancouver Island she didn't expect to land in the crosshairs of a serial killer.

Connor O'Rourke has seen his share of human depravities during his fourteen years as a homicide detective, but is still sickened by the murderer terrorizing his island shores. And threatening his key witness.

As the stakes rise, can two people get a second chance at love?

Or will a killer become the winner?

Her skin was tender as the belly of a kitten. And just as fragile.

Almond shaped eyes, the color of strong black coffee and wide with terror, glittered with the tears streaming down her dusky cheeks.

Too late for that. She should have begged for mercy when he demanded it. Instead, she’d laughed at him.

He ran a finger from the gold love knot piercing her belly button, up to coffee-colored breasts tipped with cocoa nipples peaked with fear. She should be scared. He was her master and she’d wronged him. She had to pay.

This was his favorite part. There was probably something wrong with him, but the thrill he got out of having complete control over his subjects filled his body with adrenaline, made blood rush to his extremities, and turned him rock hard. Way better than sex. Sex was dirty, all that sweat and bodily fluids. Not this. This was clean—spiritual.

He picked up the red hot iron he’d been heating on the propane stove. When she saw what he had in his hand, her body bowed against its bonds, but there was no escape. She’d run away from him for the last time.

He pinched her pebbled nipple, tipping her breast upward so he could access the tender skin beneath. The acrid scent of burning flesh and the inhaled silent scream of torture before her eyes rolled back in her head rewarded him for his patience. The S was perfectly shaped. The snake’s head crested the top of the curve, its forked tongue curling around the scorched meat of her breast.

She was his now. Restitution begins with the truth.

Lucas Carmichael and Scott Anderson had it all, money, fame, and fortune. But one night's stupid mistake takes everything they thought they cherished and dumps it upside down.

As the local ME, Tracy York, investigates the case, discrepancies begin to point to more than a simple drunk driving incident.

When threats are made to Tracy's life can Scott and his guardian angel, Lucas, protect her, or will she become another casualty?

JACQUIE BIGGAR is a USA Today bestselling author of Romantic Suspense who loves to write about tough, alpha males who know what they want, that is until they're gob-smacked by heroines who are strong, contemporary women willing to show them what they really need is love. She is the author of the popular Wounded Hearts series and has just started a new series in paranormal suspense, Mended Souls.

Jacquie lives in paradise along the west coast of Canada with her family and loves reading, writing, and flower gardening. She swears she can't function without coffee, preferably at the beach with her sweetheart. 🙂

Jacquie lives on Vancouver Island with her husband and loves to hear from readers all over the world!