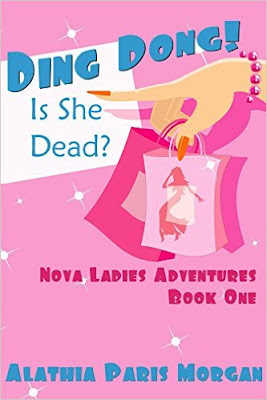 Makeup, murder and mystery are the special ingredients causing Allie to become entangled in a dangerous situation possibly leading to the love of her life.

Witness protection was supposed to be safe, but when a dirty cop starts stalking her, Allie's day takes a turn for the worst. When she goes to deliver her friend's beauty products only to find her door hanging on its hinges... and a trail of blood leading to a body. Is she dead?

“Did you want another beer?” Hearing her voice at his elbow saved Justin from searching the room for her.

“Yeah, thanks.” Justin wasn’t sure how to start up a conversation with her.

“Allie. Oh, the girl you were hanging out with said to give you a message if you ever came out from hiding in the bathroom.” She winked at him.

Allie was well acquainted with his type, good looking and charming until the next morning when they had what they wanted and didn’t need the girl anymore.

“She said, ‘She hoped you could find the right type of girl to take care of you. God only knows what kind of girl that could be. Someone to ride in and knock you off the black stallion you are so proud of.’” Allie started to move away, when Justin spoke.

“She was mad I wouldn’t take her out on a date. I couldn’t because we had nothing in common. She just wanted to be seen with me so others would like her as well.” Justin grimaced as he realized, Allie would never go out with him now.

Ugh! Way to go. Justin mentally slapped himself. Put another girl down and she will want to date you. Smooth man.

“Well, don’t feel too bad. She just needs to take the stick out of her butt, but that’s just my opinion. You can’t force someone to like you, it’s either there or it’s not. Here’s your beer on me.” Allie pulled some money from her apron and placed it in the register, moving on to another customer.

Allie glanced at the guy again, he seemed nice. Obviously the girl’s perfect body wasn’t this guy’s dream. Although, she is gorgeous and built, but who knows why he wasn’t interested. Oh well not my problem.

Trying not to stare at her was more difficult than Justin thought it would be as the night continued on without her returning to his end of the bar.

The other girl replaced Justin’s beer, “Last call dude. By the way, Allie isn’t really the type to pick up someone at her work. Better luck next time.” She remarked with a smile.

Beginning to feel like a stalker, Justin took the hint and got up to leave. Placing a few extra dollars in the tip jar, he went outside and leaned against the wall.

Trying to think of a plausible excuse to ask her out, he just kept repeating his part in that horrible conversation with her.

Not realizing the parking lot was clearing out, Justin was lost in thought when the bouncer, Stan walked Allie out to her car making sure she was inside before turning to find Justin standing there.

“You need to go home or I can call the cops. Which option do you want Bub?” Stan was a large man and he blocked Justin’s view of Allie when he placed his hands on his hips.

“Oh, sorry. Got lost in thought, I’ll head home now. Didn’t mean any harm.” Justin started toward his car, but stopped when both men turned toward the muffled cry.

Allie’s car revved up and slammed straight into the dumpster.

✯✯✯✯✯well written
By cleosmom
I truly enjoyed this story that grabbed you from the beginning. It gives you a sense of what women go through in regards to domestic violence. With this story, you get involved so much that you really want to kick the villain in the you-know-where. This is not a subject that many authors will address in a romantic suspense story as it is categorized as. Well done and I will be reading more by this author. 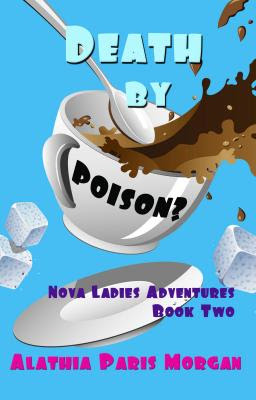 Surviving an abusive husband, Megan starts fresh with her daughter Sally hoping that her future will be better than her past. Offering to clean out an old cabin on the ranch, Megan uncovers a murder that has gone unsolved for 25 years. Clues in an old journal, missing money, and blackmail are reasons for poisoning Megan, but will it keep the past from being uncovered?

Megan has fallen hard for the attractive lawyer who helped her escape. Mark is not only patient, but handsome as well. Uncertain that Mark can deal with her self-confidence issues, she withdraws from those who love her. When Mark walks away leaving Megan and Sally vulnerable to the attentions of a killer, will his love for her overcome their problems in time to save her from Death by Poison?

Walking in the front room, Megan was startled to find all of the boxes she had placed as a barricade had been moved and stacked neatly on the couch next to the doorway.

I’m sure that I put those boxes in front of the door. It looks like they are right back where I moved them from. How did that happen?

Oh, no. Now, I’m the one doing the hallucinating.

Snap! That means that someone was in here while I was in the back room.

Feeling nervous, Megan ran back to the room and saw that none of the journals had been moved.

Quickly placing the shoe boxes full of journals in one big box, she then laid the wedding dress and veil over the top of the box as she carried it to each room. She wasn’t willing to let it out of her sight while she closed the windows and locked the doors.

Certain that someone was trying to mess with her, she locked the front door and went to the golf cart. Putting the box on the seat beside her, she raced around to the driver’s seat only to find the front tire was flat.

“Oh great, now the tire’s flat.” Kicking the tire didn’t make her feel better, but comprehension slowly sank in, there was a reason her tire might be flat. “Oh, crapola, this is so not good.” Glancing around she didn’t notice anyone, but if they were watching her, she doubted if they would be out in the open.

Megan tried calling G.G. with her cell phone, but had no signal. Going back in the house to use the phone would be the best choice, but if someone wanted her stranded then they could have cut the wires to the phone. She didn’t want to waste any time getting to safety.

The shadowed figure watched Megan run away from the house. Knowing that she was cleaning the cabin out was not a problem in and of itself, but if she discovered anything that Anne had written about him, then she would have to die as well. Time would tell if Megan had signed her own death sentence or if she would be allowed to live.

✯✯✯✯✯LOVE, LOVE, LOVE!
By Beth Mosley
I loved this book! Alathia just gets better and this book is hard to put down. This is the second book in the NOVA series and was even better than the first. I usually figure out who the bad guy is way before the end, but not so with this book. I was on the edge of my seat and biting my nails! Can't wait for the next one! 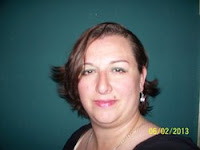 Alathia is known to those around her for having an a long time love affair/obsession with Dr.Pepper, she has asked to be buried with a can so that it never runs out in the after life. Always bossy, she uses her mothering instincts to help others and share awareness of abuse in child and domestic situations.