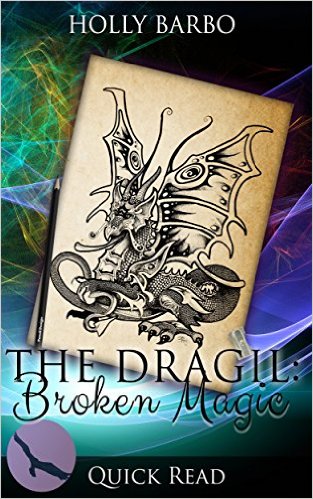 A YA fantasy adventure. Original Dragilio art by Ian Styer.

When Willum, an apprentice book maker, has a nasty fall, he loses all of his memories…including the strictures concerning protective magic for the exquisite miniature dragons called Dragilios. Not knowing he is breaking the magic law, and sending the little Dragil, Malle, into deadly peril, he draws the friendly, little dragil.

The moment the picture is finished the protective spell shatters. Her anguished cry as she disappears restores his memory.

Devastated at what he has done and wanting to right the wrong or die trying, Willum undertakes a dangerous quest into the malignant world of the giant leather-winged dragons. Can he find her in time before she is ripped apart and eaten? If he stays too long in that lethal land, he becomes stone.

The hourglass sands are slipping away toward the doom of the boy and the fragile little dragil. Can he save them both?

The bright sunshine was muted behind the curtains when he woke to the sound of a door opening. A girl of about seven years nudged it wider and brought in a tray. There was a small dragon-like creature fluttering in behind her. It landed on the window sill and closed pale blue wings edged in gold scallops. Though the wings folded against the creature’s back, they weren’t solid in color, but instead resembled those of a butterfly in their delicate patterning. It cocked its head and studied him.

The child set the tray down on the table and poured water in a glass. She glanced at the little blue-winged dragon. “Raik told me you were awake. You’ve got to be thirsty. You’ve been out for days. Both Mother and the healer thought you were going to die.” She brought the drink to him. “Slow, now, or you will either choke or throw it back up. Sip it.”

The moisture felt so good on the parched tissues of his mouth and throat that he struggled to resist gulping the welcoming fluid. Sighing with pleasure, he looked at the child. “Thank you. What’s your name? Where am I? What happened to me?”

The little girl blinked and her jaw dropped in dismay. “You know me! I’m Isolde, daughter of Guarin, master papermaker and owner of this bookbindery. Remember?”

He began to shake his head but changed his mind when the movement activated a headache. “No.”

The child turned and with “I’ll be right back!” ran from the room. During the few minutes she was gone, he carefully turned his head to look for the small butterfly-winged dragon that had eased his pain with her croons. Finally, he spotted her asleep in a shadowed shelf near a braid of garlic and assorted pots. His pleasure at seeing her seemed to be felt by the creature, as in the next few heartbeats she yawned and stretched. 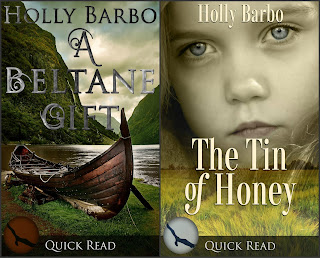 A Beltane Gift ✯ The Tin of Honey