LOOK at ME! The Para-Portage of Emily by Muffy Wilson

Emily Macque, a young, beautiful junior partner in her father's law firm, is but a heartbeat away from love or destiny. Duty brings Emily to a frozen Island estate two-hundred and fifty miles north of Chicago. Devotion requires she delve into the property history to settle an estate probate. Death lures her into the arms of the shadows seduction created by the flickering light and dark shadows.

What flames the timeless passions spanning the decades? Love, desire or obsession?

Colin Jorgenson, once a Great Lakes mariner, is a strong man haunted by love and loss. How long will he return each night, gripped by desire, hoping to find the woman he has loved for a century?

Beneath the pristine Island beauty, passions hungered, lingered in the ardent darkness. His passions, fueled by decades of loneliness and longing, could no longer be denied. Will they face eternity together or love in secret as dark things are to be loved between the shadows and the soul? 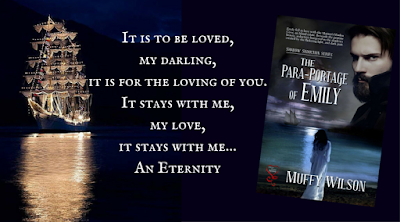 Her clothes felt a part of her flesh; she had worn them for so long. She peeled them off in the bathroom, which was stone, travertine and marble with gold appointments. It was lushly male but appealingly anointed with clearly a feminine touch. The tub was a deep, soaking tub, big enough for three people. She wondered, smiling to herself, whether her uncle had ever enjoyed the company of two women in the tub at one time as she slipped her big toe in to test the temperature. Having approved the heat, she poured oils, softening pearls and aromatic crystals into the water and stepped in. She held her balance on either side of the tub rim and lowered herself, slowly like a drifting feather, into the steaming curls of soothing bathwater. She could almost hear her pores sigh in unison to the comforting relief as she submerged herself in the warm enveloping water. The candles she lit glowed gently and softly on the tub’s surround. She smelled a fragrant potpourri, which struck her as odd. Kirby did not seem like the type of man who would think of such details or her sensual pleasures when trying to stock the house for her visit. It was one more thing which seemed curious to her, one more thing that did not fit but felt wonderful.

She would think about that tomorrow. For now, she took a sip of wine and closed her eyes…

Emily drifted in a trance, it seemed. She paid no attention to the time as she enjoyed the healing effects of the bath. She had allowed her arms to slip into the water beside her lithe, aching body. The curves of her full breasts broke the surface of the bath water and floated in the warm water, soothed. She enjoyed the aromatic elevation of her spirit and she relaxed completely. Her back felt massaged, released of the driving tension as the muscles in her legs unraveled slowly and peacefully. She felt like a languid feline, calming after a purposeful day. The water stroked her form tenderly and surrounded her body in a sensual caress.

It felt so real, she slipped further into the water to get closer to the sensation. Her now supine legs were utterly relaxed and her opened knees leaned against the tub surround on either side. She imagined a lover touching her all over as she dozed, indulging her every curve in a fantasy embrace. Emily’s spirit seemed to separate and rise above her, watching herself respond to each loving stroke. She thought she could almost see hands beneath the water as the surface rippled from movement.

The dream was pleasant and she was calmed as she encouraged the reverie. Beads of perspiration formed on her brow and upper lip. She gave herself over to the total sense of sensual release. She found her hands gently rubbing herself between her legs, gliding up her taunt stomach to her breasts, full and round, slippery from the oils in her bathwater. She was lost in a dream, suspended on clouds of corporeal relief. She felt her response coming in mounting waves. She felt hot and open to the water’s touch. She pressed her knees wide apart; her pussy was completely exposed and open to the warm water that kissed her tender lips below the water surface.

As she released herself into her orgasm, she moved and raised her buttocks, pushing her womanhood into the hand between her legs. She shuddered and quivered as the contractions and pushing came alternately, over-whelming her. As she relaxed and calmed herself, she found her hands gripped the sides of the tub—nowhere near the soft excited mound where her legs met. She was perplexed but did not care about that minor detail as she dropped them to her sides, then turned and closed her eyes again. She swam in the warm sensations of her orgasm for a while longer. How much longer she didn’t know.

Emily finished her bath, stepped from the tub and wrapped herself in the comfort of a plush terry cloth towel. She poured herself some more wine as she watched the water drain, mesmerized by the motion of the funnel of water as it drained from the immense tub. In the flickering candlelight, and shadows of the bathroom, she thought she saw an image in the swirling, warm water but tossed off the idea as nonsensical. The light and dark flickers created by the candlelight reflected in the darkness of the window above the tub and the sensual shadows moved rhythmically, seductively…beckoning.

Unbeknownst to Emily, she was to discover the shadows created by light and dark. Furthermore, she would discover she liked it there. She had been in control of her destiny until then, but no longer. The fact was Emily would become a prisoner of the shadow’s seduction… 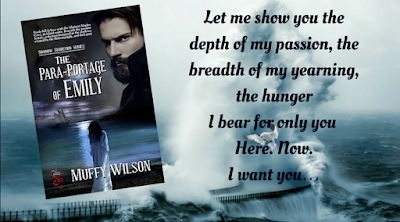 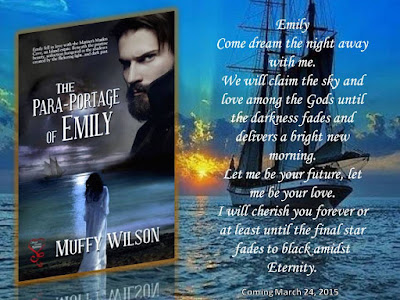 Muffy, author of provocative romance about love, sex, hope and passion, was born in Texas to traditional parents. With two older brothers, she was the youngest, the family "princess," indulged and pampered. Her father was a career Colonel and pilot in the U.S. Air Force which required the family to travel extensively. Muffy spent her formative years in Europe and 'came of age' in France which forged her joie de vivre and love for books, writing and education.

Married and living in the tropical paradise of SW Florida along the Gulf Coast, Muffy dabbles in real estate, writes and enjoys life in the sun with her husband and wee Havanese pup, Burt.