PROMO TOUR with #GIVEAWAY: I've Also Got Your Front, Hailey by June Kramin

I've Also Got Your Front, Hailey

Book 2 of the Hailey series 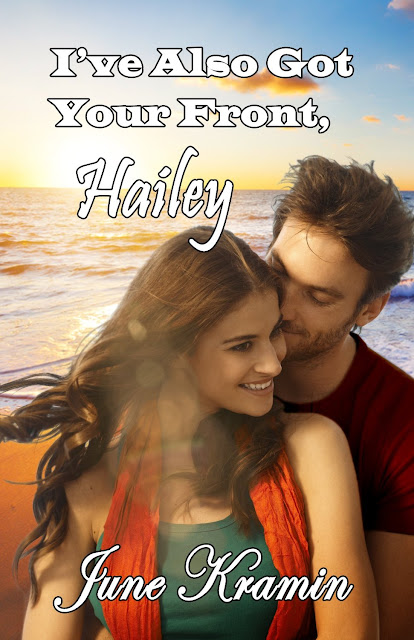 With the McMand job behind them, Donny is taking a much needed vacation at one of Parker’s safe houses. After encountering a woman in trouble and trying to help her, he’s injured in the struggle. He’s forced to call for Parker and the rest of the team’s help.

Although the island is normally a peaceful tourist destination, they soon discover that it is run by a drug lord. He’ll stop at nothing, trying to get back what is his – the woman Donny rescued. She fled, afraid for her life, and Donny is determined to get her off the island safely. Falling in love with her only complicates matters more.

They desperately need to get to safety, but Parker just as desperately wants to keep his Mexico retreat in the clear. The sudden appearance of his sister and an old hacker friend they discover in the mix quickly turns this into their most dangerous job yet.

My phone chimed in that I had a text message. Hearing the Gilligan’s Island theme song, I knew it was Donny. I learned never to leave my phone lying around unattended. I didn’t want to see what he’d do to my other contacts, not that I had that many.

Where are you guys?

Give me their home number and turn on the TV.

I sent the number to him while Parker and Kevin nagged me, wondering what was up. “I don’t know yet. Where’s your phone?” I asked Parker.

“Guess I forgot it at home.”

“He’s gonna tan your—” Before I could even say “ass” my parents’ TV screen flickered to life with Donny’s face.

“Who all is there, Hales? Shit…hang on a second.” My phone rang as he continued to speak. “I can’t hear or see you.”

Everyone could hear him over the television. “Put the phone up on the TV, camera out. I’ll hear you well enough.”

Kevin escorted our parents out the patio door. I was grateful. They still weren’t quite up to speed on what Parker and Kevin did. The less information they had, the better off they were. They’d just experienced their TV set being hacked into via their internet; that was probably enough for one day.

Parker balanced the phone on a framed family photo and stepped back. “What gives? Why use Maryann and hack into their system? Talking on the phone isn’t good enough for filling me in on your vacation?”

“Right here.” He was walking into the room as Donny asked for him.

“My mind may be a little burned out on tropical drinks right now, but I’m pretty sure some sort of shit is hitting the fan.”

“You’re on vacation. What the hell are you doing?” Parker asked.

“I was minding my own business.” He paused and took a long draw of a beer.

“And…” Parker said in frustration.

Stepping closer to the screen, I asked, “Are you okay?” I had to admit I thought I knew him pretty well for the short time we’d been working together. Something was wrong. I was sure it wasn’t lost on Parker, but coddling through trauma wasn’t their strong point.

Donny focused on me. “I have a doc on the way.”

“For what?” Parker bellowed.

As Donny stepped back, we could see a woman on the couch behind him with her arm over her eyes.

Kevin laughed out loud, hard. “What’d you do? Pick up a beach goddess and break her?”

“Shut the fuck up, Kev.” Donny was far enough back now that we could see his chest. He removed a washcloth he had pressed low against his ribs and revealed a long wound that could only be from a knife.

“What happened?” I shrieked.

There was a knocking on the door behind him. “That’s Doc. I gotta go. I called Seth before I called you. He’s getting the plane ready. Get your asses out here.” He signed off without another word.


Book 2 of the Hailey series

I Got Your Back, Hailey 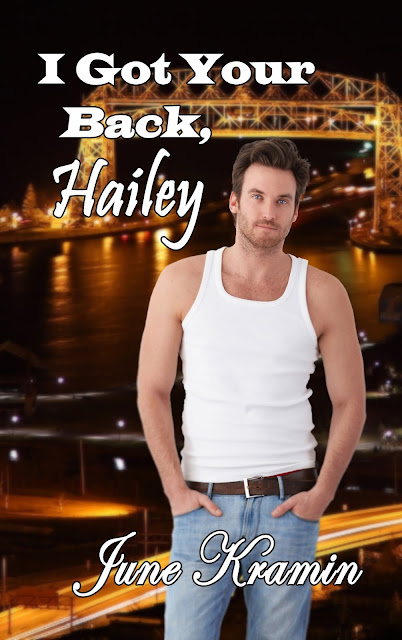 When Hailey stumbles upon a backpack full of money on her nightly jog, she is forced to flee the security of her secret identity. Although the sudden appearance of a man that had been flirting with her earlier seems odd, Hailey accepts Parker’s help in getting the heavy bag home. Within moments of arriving, they escape under gunfire. The men it was intended for want it back, and Hailey has now made herself a target. Safe in a motel room, the two of them discover the truth: although their meeting was an accident, Parker had been involved in the bag’s drop and she had been his assignment all along. Now, getting Hailey away safely is Parker’s new mission. Together they struggle to put together the pieces of Hailey’s past and discover that they have more in common than they thought.

“Exactly what is the plan here?” I asked after another long sip of beer.

“I’m not exactly sure now. The money is definitely not going to do what it was supposed to, and you have no business being involved in all of this.”
“Pardon me, but that’s your fault.”

“Let’s not do this again, okay? Are you forgetting I chose you over the money?”

My eyes lowered. “No. I’m really not sure of the etiquette on how many times I’m supposed to thank you for that.”

“Let’s drop it. What’s done is done. I need to figure out what to do from here. How to get back on track and get you somewhere safe.” I walked over to the small refrigerator for another beer. “Parker? Is there a chance I can make a phone call?”

“That depends. You going to try to signal for help?”

“No. I…I think I need to let my mom know I’m okay. She normally calls me on Saturdays for an update. I’m worried she’ll think something is wrong if I don’t call soon.”

“We’ll go get you your makeup or whatever you want, and I’ll get a new throwaway phone. You can call her from that. No giving away anything about our location.”

I was getting tired of all this cloak-and-dagger shit. It was wearing on my last nerve. “Who exactly is following you? What was the money for, Parker? Or Gavin. Whatever your name is! This is no longer funny! You think they’d tap my mother’s phone?” I rushed his chair and landed both hands hard on his chest. He grasped my wrists and held them tight as he stood.

“Whoa! Why would you think someone would want you back so bad as to post someone on your mother?”

“You going to be civil?”

Too nervous now to return to the chair, I stood and peered out of the crack in the curtain. “I need to know something and I need the truth.” I faced him, needing to look into his eyes. The eyes always give it away.

“Fire away.” He motioned that I should carry on with a wave of his hand.

“I think I tripped on this money by accident, but I need to know if I was set up.”

“You? Set up? Why do you think you were set up? How could I have possibly pulled that off?”

“Things just don’t add up. We flee under gunfire…you save me but don’t take the money…”

“Back up. What do you know that you think someone would pay a million bucks for?”

Wife, Mother, Writer, Lunatic. Not necessarily in that order.

"There is a fine line between genius and crazy... I like to use that line as a jump rope!"

June, who prefers to go by Bug, was born in Philadelphia but moved to Maui, Hawaii when she was four. She met her “Prince Charming” on Kauai and is currently living “Happily Ever After” in a small town in Minnesota.

Her son and daughter are her greatest accomplishments. She takes pride in embarrassing them every chance she gets. Being hopelessly addicted to 80's music is her super power.

Before Happily Ever After