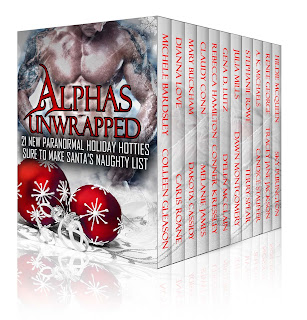 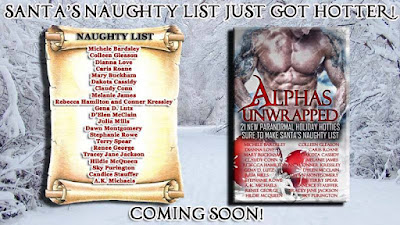 21 Paranormal Tales so hot, they're sure to make Santa's Naughty List! Now's your chance to own this LIMITED Edition Boxed Set. Grab your copy before it's gone! The alphas are hot! The heroines are sassy! These ALL NEW stories are guaranteed to heat up your holidays! 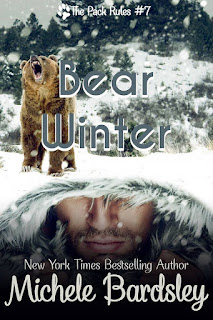 Michele Bardsley
Bear Winter (The Pack Rules #8)
After a vindictive wendigo nearly kills his brother and kidnaps his sister-in-law, bear shifter Gabe Pearson has no choice but to ask psychic and ex-fiance Hope Wheeler for help. Together, they will fight through vicious snowstorms, murderous shifters, and grievous emotional wounds to save Gabe's family--and get a second chance at love.
Facebook : http://on.fb.me/1IHDn65
Amazon: http://amzn.to/1JRLpgI 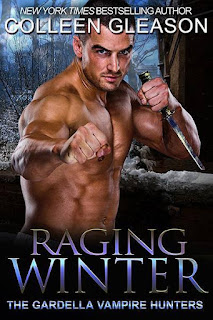 Colleen Gleason
Raging Winter: Max Denton Book 2 (The Gardella Vampire Hunters)
England, 1922: Savina Eleaisa is certain the famous vampire hunter--and her former lover--Max Denton is dead. But when she follows a vampire to a Christmas house party at a large English estate, whom should she find but Max Denton, deep undercover--and not very happy to see her. "If Buffy visited Downtown Abbey." --Laurie London 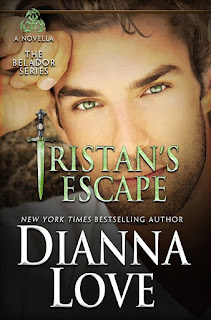 Dianna Love
Tristan's Escape: A Belador Novella
Holidays stink when you’re alone, but the only woman Tristan ever cared for betrayed him years ago. Sucker that he is, Tristan teleports another Alterant to Atlanta in December to propose to his girlfriend, and walks straight into an ambush ...along with the woman he vowed would pay for his
five years of imprisonment.  Now he has to choose between saving her and losing his freedom forever.
Facebook: http://on.fb.me/1FiQfPZ
Amazon: http://amzn.to/1JRLwZN 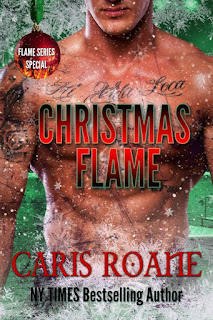 Caris Roane
Christmas Flame (A Flame Series Book)
On Christmas Eve, vampire Officer Kyle Drake has finally persuaded the shy shifter, Verena, to go on a first date. His plans include a little mistletoe and a lot of seduction. But when a call comes in that a teenage girl has been abducted and Kyle and Verena go in pursuit, he fears the
dangers of their world will once again force Verena back into her no-dating-ever mode…
Facebook: http://on.fb.me/1N9iQ27
Amazon: http://amzn.to/1g7CMnk 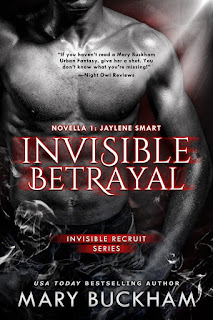 Mary Buckham
Invisible Betrayal: Invisible Recruits Novella
Street savvy Jaylene Smart is spending her DC holiday on a snatch and grab assignment to terminate a threat, but it beats sitting alone in an empty hotel room. Her target is way-out-of-her-league-powerful Herm Kane and stealing from him sends her into the dangerous underworld of
preternaturals she never knew existed.  Surviving will depend on teaming up the same sexy Herm Kane, the man she just betrayed.
Facebook: http://on.fb.me/1hTapv1
Amazon: http://amzn.to/1g7CRaC 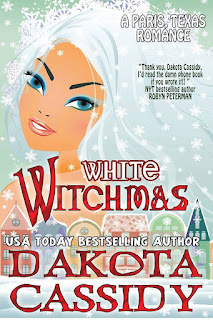 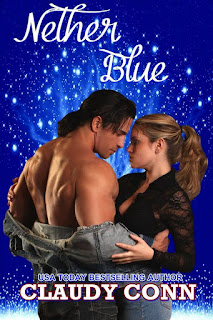 Claudy Conn
Nether Blue
Magic has always been a part of Calico’s life, but now because of it, she is on the run. Ahead, more danger. Enter Brodie, a prince from another realm. Will saving Brodie, trap her or save her?
Facebook: http://on.fb.me/1FogGJ3
Amazon: http://amzn.to/1IWpDV8 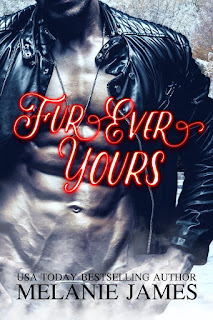 Melanie James
Fur Ever Yours
When a dangerous female shows up in the middle of the night, Rafe's world is turned upside down. Was she sent by a rival clan to rip apart his pack, or just his heart?
Facebook: http://on.fb.me/1Gbx1Q8
Amazon: http://amzn.to/1JRLSQ5 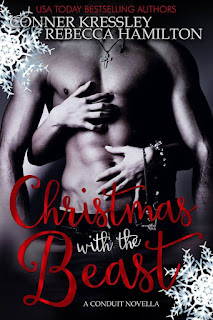 Rebecca Hamilton & Conner Kressley
Christmas With The Beast
Christmas heats up for a Beauty and her Beast when they find themselves at the top of a homicidal Santa's naughty list.
Facebook: http://on.fb.me/1FmMPvv
Amazon: http://amzn.to/1JRLVv9 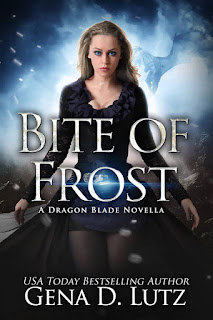 Gena D. Lutz
Bite of Frost (A Dragon Blade Novella)
After Jericha Frost is thrust into a paranormal existence she knows nothing about, she learns that the scorching blood from an infuriating dragon-shifter is her only hope of survival.
Facebook: http://on.fb.me/1L3Aezl
Amazon: http://amzn.to/1g7CZH4 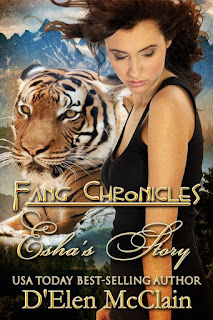 D'Elen McClain
Fang Chronicles: Esha's Story
Vampire politics are not exactly what Rondy expects when he enters the dark world of immortality and killing a deadly, out of control tigershifter is not his idea of fun. When fate intercedes, Rondy and Esha fight her inevitable death and take the brief time they are given to search for a miracle
that would topple the childless world of vampires.
Facebook: http://on.fb.me/1O7ms1D
Amazon: http://amzn.to/1g7D2To 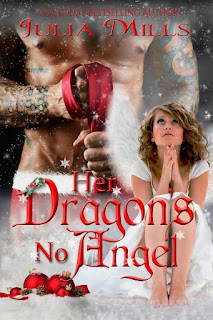 Julia Lake Mills
Her Dragon's No Angel (A Dragon Guard Novella)
Take one snowbound dragon combine with one Christmas Angel, throw in a healthy dose of an attraction only the Universe could have conjured and top with the largest blizzard in a hundred years. Now sit back and enjoy the show! This one's gonna be a bumpy ride!
Facebook: http://on.fb.me/1KcICBv
Amazon: http://amzn.to/1JRM4ig 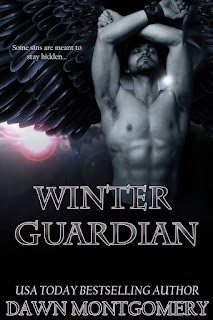 Dawn Montgomery
Winter Guardian
Ashley Baker never forgot the icy December night he came into her life. Her fallen guardian angel with wings dark as sin destroyed a beast from her worst nightmares, and then disappeared into the storm. When the beasts return, so does the guardian, but this time he's the one in trouble.
Wingless. Mortal. The spark of attraction ignites into a flame that threatens to consume them both, but will it be enough to save them from the hell that awaits if they fail?
Facebook: http://on.fb.me/1NMJX2Q
Amazon: http://amzn.to/1PZlXaG 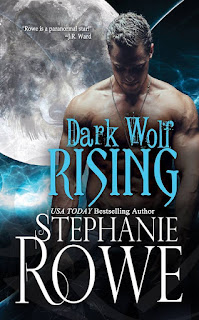 Stephanie Rowe
Dark Wolf Rising
Shifter Cash Burns has been on the run for ten years, hiding a dark secret. When his childhood sweetheart, who he hasn't seen in over a decade, is targeted for assassination by his wolf pack, he's the only one who can save her…but at what cost?
Facebook: http://on.fb.me/1JnL02C
Amazon: http://amzn.to/1PZm0TC 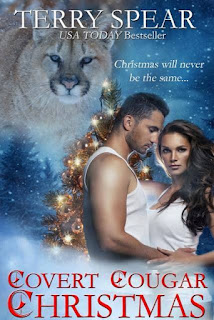 Terry Spear
Covert Cougar Christmas
Bridget Sinclair, Special Agent with the Cougar Special Forces Division has a mission—permanently stop two shifters from distributing a new drug in Cheyenne, Wyoming. While investigating, she rescues Special Agent Travis MacKay. Winter advisories are in effect for the Christmas holidays, but that doesn’t cool off the sizzling heat spiraling out of control between the two agents as they covertly team up to take down the drug-runners.
Facebook: http://on.fb.me/1JMkAr0
Amazon: http://amzn.to/1iaFOt9 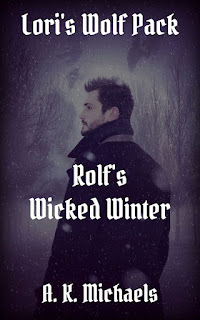 A K Michaels
Lori's Wolf Pack, Rolf's Wicked Winter
Rolf is Beta and has managed to escape the Pack for a couple of days ‘alone time’. However, Fate has other plans for him and he soon finds himself in a situation he never envisaged. Finding a mate is surprise enough, but she is on the run, and those that are looking for her are only a day behind.
Facebook: http://on.fb.me/1GrvBvY
Amazon: http://amzn.to/1JRMeWV 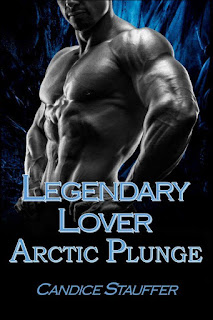 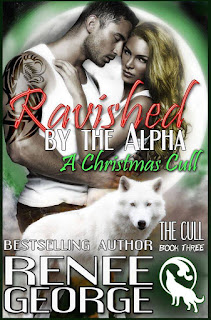 Renee George
Ravished by the Alpha: A Christmas Cull (The Cull Book Three)
Single by choice, werewolf Lizzy Langston has never been a fan of Christmas. But when Coy Vega chooses her tribe’s lands to hide from the drug cartel over the holiday, she is drawn to his dark nature and, oh yeah, his yummy six-pack abs. It will take a Christmas miracle to survive below freezing temperatures, Colombian hit men, an accidental culling, and each other.
Facebook: http://on.fb.me/1JALKEi
Amazon: http://amzn.to/1g7DgKg 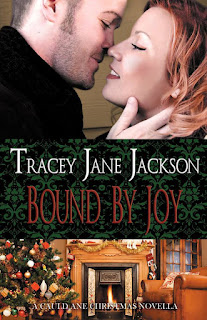 Tracey Jane Jackson
Bound by Joy (A Cauld Ane Christmas Novella)
Kenna McFadden has waited more than two hundred years for her mate and she finds him in a most unexpected way. On a mission to find his missing niece, prince Gunnar Baldersson finds someone far more precious to him. Join in their bonding as they fall in love while celebrating the sweetness and joy of Christmas.
Facebook: http://on.fb.me/1LKcZNn
Amazon: http://amzn.to/1iaG4YY 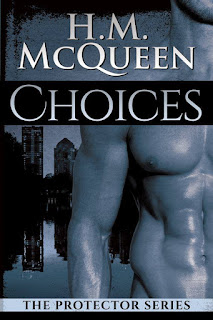 H.M. McQueen
Choices
An unbreakable bond with a handsome immortal Protector, drags Rachel Andrews into a world she never believed existed and has no desire to be part of. The actions of one night drastically alter the course of his long existence. Torn between his feelings for Rachel and his life's calling, Roderick Cronan comes face to face with the fact that he is losing both.
Facebook : http://on.fb.me/1FiRSwQ
Amazon: http://amzn.to/1PZm7Pj 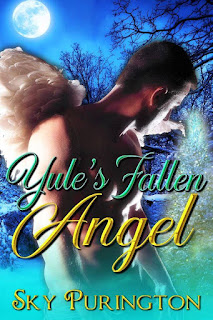 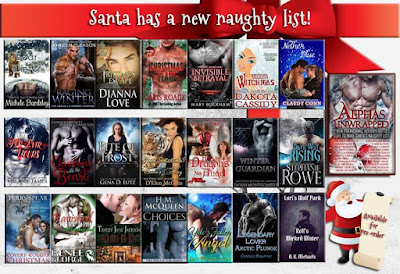