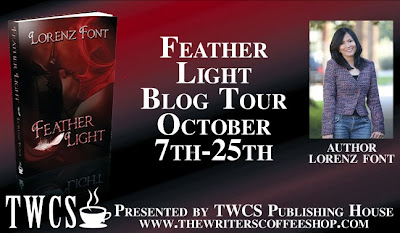 Today I get to welcome Lorenz Font back to the blog as I join in her blog tour with a review. Also, be sure to check out the Rafflecopter GIVEAWAY at the end of the post!

Summary:
Parker Davis has conquered three major American cities and is the new ‘it’ man in massage. He earned the nickname ‘Feather Light’ for his sensual touches, tender caresses, and soft voice eliciting an almost orgasmic release. Clients from all over clamor for his services, and his clientele is growing by the minute. Business is at its peak, which makes Parker a busy man who has no time to deal with problems, let alone dwell on his blindness. With his declining vision, Parker has to accept his limitations and the changes brought forth by this disease, but he is not ready to relinquish the last control he has left. He is still the master in his bedroom.

Kelly Storm, a Hollywood actress, will do whatever it takes to get some much-deserved peace. Being famous has its perks, except the little privacy her popularity afforded her is slowly eating at her. With the paparazzi hounding her every minute of the day and her personal life under constant scrutiny, Kelly wants a semblance of normalcy wherever she can get it. Under the urging of a close friend, she agrees give Parker a try.

The Writers Coffee Shop I kobo I Barnes & Noble I Amazon 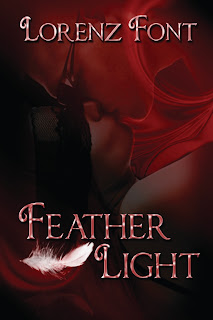 Because of my work on The Divine Trilogy, Font approached me and asked for my honest assessment of this book. What I found in the male lead, Parker Davis, was not so much a Dom as a man with a dominant persona and a side-taste for kink. When Davis, the successful proprietor of Knead Me, finds his sight diminishing due to an illness, he grabs and holds onto the one thing in his life he can still have full control over—sex. With a woman blindfolded, bound, and at his mercy, he owes no explanations for his lack of sight. His magical hands that move with a feather light touch, need no light to bring forth cries of release and pleasure thus building his self-confidence and helping him keep his sanity when the rest of his world is spiraling out of control.

Enter Kelly Storm: famous actress and Hollywood “It” girl who is desperate for an escape, for a chance to NOT be seen for once, and watch the sparks fly.

Feather Light is a tale of loss, trust, and love; of learning that no matter how hard it gets, with determination, anything can be overcome. We also get to see a little bit of playful side to Font with her creativity in this book. All I’m gonna say is, “Go, George!”

I can give Feather Light a 5 butterfly recommendation without reservation.

Lorenz Font discovered her love of writing after reading a celebrated novel that inspired one idea after another. She is currently enjoying the buzz from her debut novel Hunted, the first book of The Gates Legacy Trilogy and Indivisible Line, a romantic thriller. Her newest novel, Tormented, the second installment of The Gates Legacy, is now available for vampire lovers everywhere.

Writing is a therapy for Lorenz, and a perfect day consists of writing and playing with her characters while listening to her ever-growing music collection. She enjoys dabbling in different genres with an intense focus on angst and the redemption of flawed characters. Her fascination with romantic twists is a mainstay in all her stories.