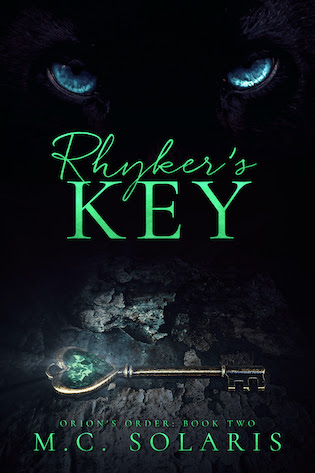 Rhyker, tattooed bad boy and lethal jaguar shifter, falls for the sweet and caring healer, Keena. Except, she’s determined to keep him in the friend zone… good thing he’s a predator that enjoys the hunt.

Together, can they heal their past and forge a future bonded with true love?

Orion’s Order returns in another addictive installment about their secret world of magic and mystery. A world where the most powerful words in the Universe are discovered in the fight against an ancient evil force.

KEENA OLIVER
I am haunted by my past mistakes. Mistakes that I have no idea how I even made. I am an educated mind and spirit healer after all. So how in the holy healer hell did I end up in a relationship where the male who I thought I loved…
Yeah, it’s probably best not to rehash those nightmares. But if I don’t dare open up that box to my past, then how am I ever going to be able to move on? Especially because I so want to move on with a certain sexy male. A male whose lips devoured mine in a darkened corner that one time. A male whose predatory piercing blue eyes practically track my every move. A male who I shouldn’t be fantasizing about every second of every day. Why? Because it would ruin me.
RHYKER KINGSLEY
I’ve had my eye on a certain female for almost a year now. A female who is damn determined to keep me in the friend zone. A female who’s been hurt by her ex but refuses to open up to me about it. So, you could say I go through a lot of smokes… a f*cking lot.

Meanwhile, my pack of lethally trained and skilled hunters and I are gunning for an evil SOB who not only signed his death warrant the second he tried to come after my pack sister and mate to our alpha, but also the f*cker poses a threat to our world as we know it. Yet, said ancient powerful bastard has gone off the grid and is all but impossible to track.

Oh, and did I mention that the past seems to be mixing with the present? I mean, the f*ck is this? The revenge year of the shitty exes?

So, excuse me while I light up a smoke… or two.

Devour this addictive series at your own risk…
+ Happily Ever After
+ Sexy Paranormal Jaguar Shifter Romance
+ Multiple POV
+ Mature Content
+ This series is meant to be read in order for the best reading experience
———————————————-
RHYKER’S KEY is an adult paranormal jaguar shifter romance. If you like swoon-worthy males, heroines with feminine strength, an engaging plot, satisfying relationships, steamy love stories, happy ever afters, and getting sucked into a supernatural story, then you’ll want to immerse yourself in the world of species!

Words. She needed to find words so she could respond because that was how conversations went. But words eluded her at the moment because she was still trying to recover from the debilitating tease from a moment ago when his lips were… Wait, you need to respond. But what did he say again?

“What do you use the second bedroom for?” he asked again in that curious feline way of his as he walked back toward her from the hall.

What do you use the second bedroom for? She had to slowly repeat his question in her mind in order for her brain to get with the program and understand what he was even asking. My second bedroom? Oh god, do I tell him what’s in there? She bit her lip in slight hesitation and he noticed, of course.

“What? Is that like your secret sex dungeon or something?” His lips turned up at the corners in a very feline way.

“Sex dungeon?” She laughed. “Of course that’s immediately where your mind goes.”

“Well, where else would it go when I’m with you.” He took a step closer to her. “In your home.” He closed the distance between them so they were separated by mere inches. “Alone.”

Her pulse quickened to a hummingbird’s pace and suddenly, she was back to being in the scorcher of desire.

Noticing her reaction, his mischievous grin transformed into his irresistibly sinful smirk.

She opened the door to the second bedroom and he peered inside. His brows shot up in surprise before refocusing back on her in a silent question.

She laughed. “No, this is not my sex dungeon. This is my therapy room.”

“Therapy. Is that what they’re calling it these days?” he drawled, walking over to the pole. Without warning, he gripped the pole and lifted his body effortlessly so he was completely parallel to the ground. He gave her a wink and she laughed. As soon as his feet touched the ground, he climbed up the pole with just his arm strength.

“Good thing I had that installed for the highest weight class or else you may have fallen flat on your face,” she quipped, trying not to notice the way his biceps flexed and tantalized her feminine essence.

“Don’t insult me. I always land on my feet.” As if in emphasis of his point, he let go of his grip at the very top of the pole and landed softly on his feet with feline grace.

“So not fair.” She shook her head, still smiling. “I’ve trained for years and yet here you go showing me up.”

“I’ll gladly be the judge of that.” He stepped aside and held his arm out to the pole in invitation for her. 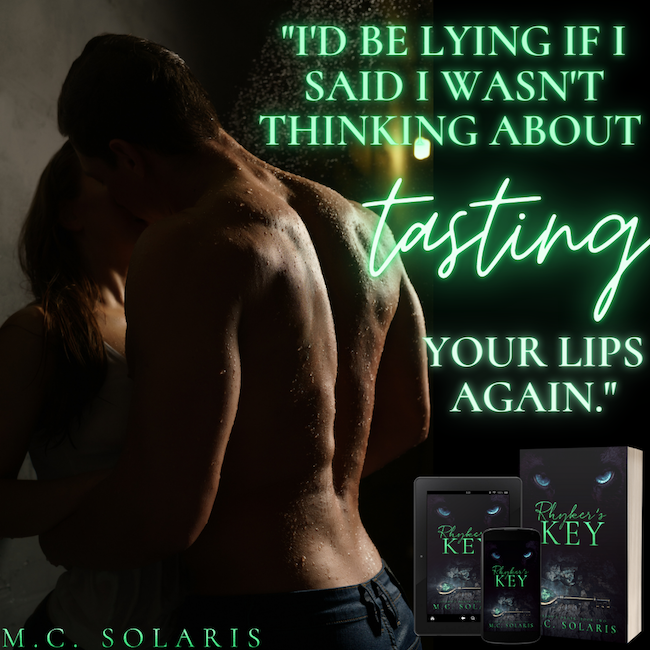 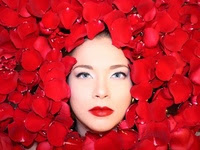 M.C. Solaris’s life took an unexpected turn during the super blood moon eclipse on January 20, 2019. She woke up and began writing bios for her imaginary friends that she met that day. As soon as the pen hit the paper (or fingertips to the iPhone), she couldn’t stop. It was kind of like one of those fire hydrants, spewing copious amounts of water all over the place. The characters and their stories just flowed out of her. She is honored to be the scribe, getting to share her friends’ stories. You can read all about her gifted friends in the Orion’s Order series (Book 1 is Calypso’s Heart).

On a personal note, M.C. Solaris is actually the pseudonym of Marina Schroeder, women’s health enthusiast and lover of all things paranormal romance (PNR) and happily ever after (HEA). When she is not curled up on the sofa with her partner’s oversized hoodie, a PNR novel, peppermint tea, and one of her three cats, you will find her either at the ocean with her toes in the sand or in a forest hugging a tree. Well truthfully? There is one more place you might find her: trolling the aisles of Whole Foods for a satisfying combination of salty and sweet while hiding in her partner’s hoodie… like any proper PNR-writing introvert.

Want to get the latest scoop, sneak peeks, and short shares all about her imaginary friends? Go to www.mcsolaris.com and sign up for the newsletter.
Welcome to The Order!