WANTED
An artist seeking redemption.
A wanderer needing permanence.
And the crazy that'll make or break them.
written by R.E. Hargrave
narrated in duet by Tor Thom and Charley Ongel
Listening length: 4 hours 47 minutes
Listen to a sample HERE 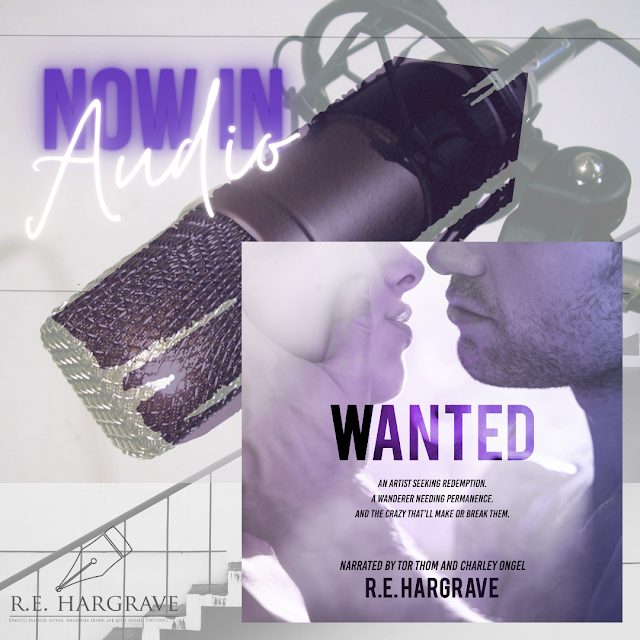 Cover design by JC Clarke
Blurb:
Hyde Johnson is an erotic audiobook performer. A "read by" byline is too plain, and "narrated by" still doesn’t capture what he does. His livelihood is his passion. Performance art, the air he breathes. Which translates to a recluse who is a hot mess.
He’s not eating right, he’s drinking more, and his family’s meddling is making it harder to stay on task.
Being designated the guardian of her young niece Tina is the last thing Gypsy Hartford expected.
But when the State of South Carolina unceremoniously puts Tina in her care, Gypsy accepts it’s time to grow up and stop floating from town to town. Where does she start when she has no degree, no real friends, and no family besides Tina?
A want ad could be the answer to both their conundrums. Or it might open a whole new can of worms. Especially when you throw in a crazed author with an unhealthy obsession for her narrator.
Wanted:
Someone to run errands, cook, and handle minor cleaning. Must be quiet and self-starting as I work nights and sleep during the day. Compensation negotiable, including transportation and board. Discretion a must. Only serious inquiries please.

What Reviewers Are Saying:
"R.E. Hargrave is a fantastic writer and this book is no exception."
"The characters are well developed and compliment, not only each other but the story nicely."
"Gypsy is well developed and strong female without being a curse word laden witch. Can you say refreshing?"
"This was a steamy, quirky, fun story line that I found entertaining and the narrators Tor Thom and Charley Ongel brought Hyde and Gypsy to life for me with their duet narration. The ease of the narration made it an enjoyable listen as this team blend so well together."
"Tor Thom and Charley Ongel perform this gem in duet narration. This team is one of my favorites, and they bring these characters to life. Each character has been given a voice, each scene perfectly executed and passion is off the charts. Grab this one and give your ears something to enjoy!"

It took Hyde about an hour to do his basic admin before he pulled up the chapters they’d recorded last night to work on. After running them through his own edits, so that they were to his exacting satisfaction, he uploaded the files to the system then composed a quick update to Sami on what was included, how he and Kendall were working as a team, and what his current expectations for the project were. There were still some menial tasks he wanted to get checked off his list before he went and did a workout, but he needed a break first. He used the bathroom then went down to the kitchen for a coffee refill.

Kendall was in the living room, her attention buried in her phone while some morning talk show blared from the ignored television. He shook his head at her entitlement, and kept going.

Part of him still wished Sami had chosen the sample he’d sent of him and Gypsy, but the logical part knew they were too volatile for that. They could barely make it through a few hours without it turning sour or becoming awkward in some way by the end, which wouldn’t be good for a business project. No, it was better that he do this with Kendall.

Or a long-distance associate, the way I usually fucking do it, he thought with a grimace, and then found himself once again longing for the peaceful solitude the old schoolhouse had once provided. He had no idea how his home had become Grand Central Station this summer.

Back in the studio, a barrage of recent memories, all including a certain smiling raven-haired beauty, hit him, reminding him it hadn’t been all bad. Driving, chasing each other with the hose while washing the car, kitchen mishaps, boiled peanuts, pizza, and movies…

The ding from an email alert made him sigh as he released the indulgent thoughts to fade away. Seeing that it was from Sami surprised him. Given how quiet she’d been of late, he’d thought it would take a day or two for her to respond. At the very least, more than the ten minutes it had been since he’d sent the chapters. She couldn’t have logged in and listened to them this quick. Not sure what to expect, he opened the message:

Hyde! It’s perfect. I love the two of you together. Can’t wait for more.

Short, sweet, and oddly enthusiastic. He didn’t get time to analyze her words much longer because his computer began dinging and chirping with alerts from the various platforms he had open—Facebook, Twitter, LinkedIn, and more.

“What the..?” Hyde clicked on the first couple, and then a few more. “Has she lost her goddamned fucking mind?”

She’d just social media blasted the world that her “lusty linguist lad” had manned up, at last, and made an honest woman out of her. And her profile picture, which he’d never seen her change, now displayed a generic “out of office until further notice” graphic. What the fuck did that even mean?

A shiver went up his spine as he looked around his office and thanked the powers that be that he lived in seclusion. Seemed Ms. Jackson was leading the crazy revolution these days, and he didn’t want her anywhere near him.

eBook available at most retailers

Get the audio HERE

and/or grab your ecopy or paperback of 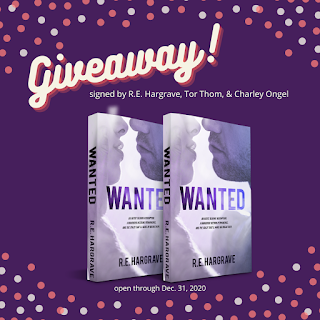 ✯✯✯✯✯GIVEAWAY✯✯✯✯✯
I've got a signed copy of Wanted plus matching swag and some holiday goodies up for grabs. The book is signed not only by me, but also Tor Thom and Charley Ongel, the narrators!
WAYS TO ENTER:
➙Follow me on Amazon and add Wanted to your Wishlist (https://amzn.to/39YMUi8)
➙Leave a review for Wanted (Goodreads, BookBub, a blog, Amazon, etc... each posted review equals one entry).
➙Visit me on Facebook (
https://www.facebook.com/REHargrave
), Twitter (https://twitter.com/REHargrave), and/or Instagram (https://www.instagram.com/authorrehargrave/) and share any of the #Wanted posts to your own social media (please comment SHARED on any posts you do forward on).
➙Complete THIS FORM to turn in your entries by December 31, 2020: https://bit.ly/WANTEDgiveaway
*Winner will be chosen and notified first week of January 2021. No social media platforms are responsible, only me, for delivery of prize. My apologies, but due to high shipping prices and restrictions this is a US only giveaway. If you are outside of the US and are interested in listening to the audio book, shoot me an email at rehargrave@gmail.com and I can probably hook you up with a UK audio code. Thank you for entering, and good luck! 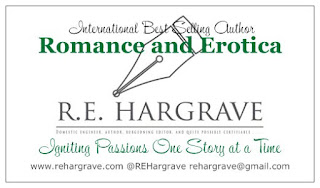