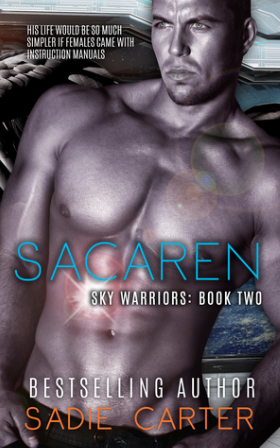 
Frankie Ricci grew up in a household of men. She could change her own tire, fix a leaking faucet and she wasn’t afraid of squishing a spider, so what did she need a man for? Well, sure there was that. But so far, Frankie had never found someone she was interested in enough to do that.
Nope. She was happy with her life just the way it was.


Sacaren wasn’t happy. He’d always believed his pack would share a mate. Having six of them watch over one mate meant she’d always be guarded, safe. Now, the idea of having to take care of a mate on his own…it made him feel a little ill.
Especially when these human females were so fragile, so easily harmed. How was he supposed to keep one safe?
Well, at least they were small. He’d just have to find a submissive, obedient one and ensure that he kept her tightly under his protection at all time. That would be simple.
Right?

Book 1 of the series, Marcun

—
EXCERPT:
“I’m not some helpless female just waiting for a male to rescue her. This dress may look like something from the nineteenth century, but I am fully capable of looking after myself.”
“You are upset with me for helping get rid of that male with the knife, who wished to relieve you of your money?”
“Yes. I did not need your help.”
“But he was bigger than you. He had a knife. You were alone. At night. That is not safe.”
“No? Really?”
He nodded. Clearly, she did not realize how dangerous it was to be alone at night. “Yes, it is not safe.”
“Wow, I would never have guessed. I mean, the fact that I’ve just been involved in two attempted armed robberies really didn’t clue me in as to how unsafe it is around here.”
“It should. You should have an escort.”
“Don’t really understand sarcasm, do you? Let me guess, a big burly man to watch over me? Is that what I need?”
“Exactly.” He nodded. He was glad she now understood.
“Urgh! Lord save me from idiotic, overgrown men who think they are superior to poor, delicate females. Here’s a tip, buddy, ease up on the steroids. They’re starting to eat away at what little brains you had to begin with.”
“Steroids?” He thought furiously. “Drugs? You believe I am taking drugs?”
She ran her gaze over him. “You don’t get a body like that without some serious help. How many hours a day do you spend at the gym?”
“I do not go to a gym.”
“Uh-huh, right. You’re trying to tell me you were just born this way.” She ran her hand through the air. “What were your parents? Greek Gods? Have you got some sort of superhero complex? What happened? Leave your cape and mask at home?”
Trying to follow her words was really making his head hurt. 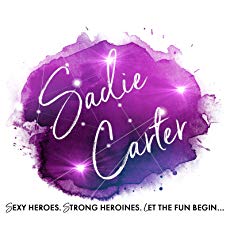 
Best selling author, Sadie wanted to blend her love of writing, Sci-Fi (why did they cancel Firefly - sobs) and sexy, dominant males.
If you'd like to keep up with any updates, she has a Facebook page.
https://www.facebook.com/sadiecarterauthor/
Sign up to her newsletter (http://eepurl.com/bQPcI5) and receive a FREE NOVELLA set in the Zerconian Warriors world, you'll also receive information about new releases, excerpts from upcoming books and deleted scenes.