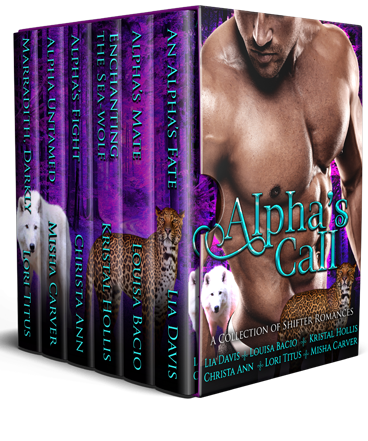 Can you resist the Alpha’s Call?
This collection of hot alpha males is a must have for every shifter lover’s ebook library.
Six bestselling, fan-favorite authors bring you action-packed romances ranging from sensual to scorching. Wolves, big cats, dragons, and much more heat up the pages.
Go ahead. Ignore the Alpha’s Call. We dare you.

“To a great week,” Jonathan shouted over the music as he clinked his beer bottle against mine, Bob’s, and Charlie’s.
Yeah, a great week, I thought to myself. It was the worst week of my entire life. I’d prosecuted six cases, and lost five of them. My days as a prominent lawyer were coming to a close if I couldn’t get back on top.
A five-year winning streak, and one week threatened to topple it all. My feet kept tapping on the floor, not so much to the loud music playing in the background, but more out of nervousness.
The guys, they all had a great week defending their cases against me and pulling ahead. A great week for them was a huge defeat for me, and yet there I was celebrating with them, just like they’d helped me celebrate each and every win along the way. It just felt so wrong. I never lost. NEVER. But I had, and I’d lost big.
“Ah, suck it up, Michael,” Charlie said as he took another sip from his bottle. “You can’t win every time.”
Charlie was such a schmuck. With his red hair, freckles, and big blue eyes, he appeared much more innocent than he was. Judges let him get away with countless courtroom antics because of his boyish good looks along with his ability to win almost any debate.
Wanna bet? I thought as I nodded my head in agreement with him. I didn’t have the energy to argue with an idiot.
“Buy me another beer, loser,” Bob said as he set his empty bottle down on the table and grinned.
Great, thanks for rubbing it in, I thought to myself as I motioned for the waitress to come over and grabbed a twenty out of my pocket. After the week I’d had, I didn’t need to be reminded of my failures.
—
An Alpha’s Fate (A Birchwood Pack Novella) by Lia Davis

No. No. Bile rose, threatening to force Reagan’s lunch to make a gruesome return. The snow-white walls of her home closed in around her, and the air seemed colder. How had she not known?
Because they weren’t true mates. Even though they were bound together, their emotions and thoughts weren’t, not like they would have been if she’d mated with her fated mate.
She stared at the open journal as fury built inside her, putting her wolf further on edge. The names neatly handwritten in black ink blurred. For ten years, she’d done all she could to protect the wolves of Greenhedge; the least she could do after being forced to mate the male who’d become Alpha—a title rightfully hers. All her efforts were wasted. The bastard had sold packmates to a rogue Pack to be made into monster assassins in exchange for what? She didn’t know. She sure as hell didn’t see any extra money go into the run-down den.
Fucking power-hungry bastard.
The front door swung open, slamming into the wall. A low growl cut through her as she met the poor excuse of an Alpha’s stare. Lifting the journal, she shook it at him. “You lied to me.”
He stalked toward her, his eyes glowing with his wolf. “You are out of line, Mate.”
Was she? She thought not.
“My place is protecting my Pack from monsters like you.” Anger had all but consumed her. It was one thing to blackmail her into a loveless mating and slap her around, but to hurt her Pack?
Mason stopped before her, then gripped a handful of her hair, jerking her to him. Pain shot through her skull. She gritted her teeth and focused on his energy, his Alpha power. As his mate, she had the ability to use his strengths. Something he hadn’t realized she could do. Or maybe he thought she didn’t know how.
“You have crossed the line for the last time, asshole.”
He bared his teeth and flipped her so he could shove her torso against the desk. Her vision blinked out as her head hit the wood. When he started to tug her pants down, she roared and jerked her head up, slamming it into his nose.
Crying out, he released her and stumbled away a few steps. Not wasting time, she shifted into her wolf faster than she ever had before and lunged at him, tackling him to the ground. Her wolf had taken over, and for once the woman relished in it.
The thought that it was unfair to fight another while they were in human form was a whisper. One her wolf ignored. Mason Doyle had fucked over his last victim.
She struck, fast and hard, sinking her teeth into his neck. He bucked under her, but he was unable to shake her off. Adrenaline raced through her veins, fueling the rage. The animal wanted blood for all the innocents lost over the years. With a growl, she shook her head, tightening her hold until his body went limp and the mating bond broke.
Her breaths came in and out in deep waves as she slowly backed away. The taste of his blood coated her tongue. The wolf wanted to finish him, to revel in the kill, but there was no time. Someone was coming, and without the bond to the Pack she couldn’t tell who. 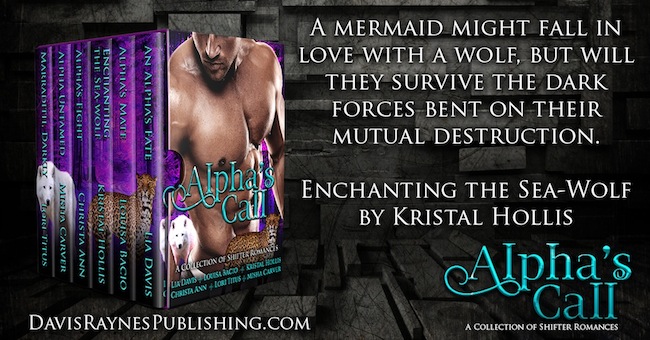