RELEASE TOUR: All For Him by E.M. Denning

ALL FOR HIM
by E.M. Denning 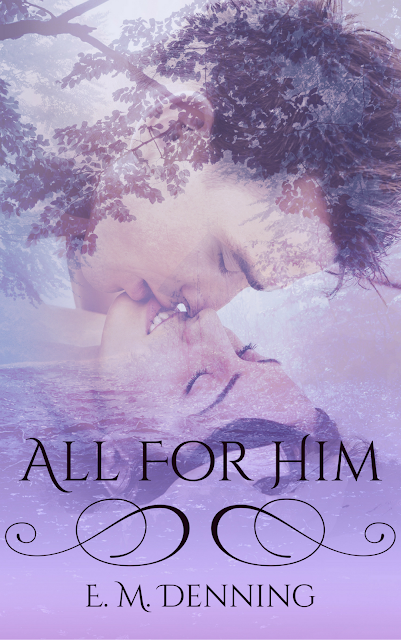 Ashley Hartman has always been child free by choice. It’s a decision her first husband knew about when they met and it’s the same decision that tore them apart years later. Now a thirty-six-year-old divorcee with an overly opinionated best friend and a career she no longer wants, Ashley is trying to move on with her life.

Liam White swaggers his way up her driveway and into her life a year after her swift and brutal divorce. Though he’s twelve years younger than her, their friendship is instantaneous and it’s not long before she hires him to finish the renovations on her house.

Their relationship quickly explodes into something neither of them expected. As Ashley starts to let herself believe she could have a second chance at happiness, everything goes sideways.

Ashley woke before Liam the next morning, or at least she thought she did. When she went to slide out of bed, an arm shot out and wrapped around her and he pulled her in close to him. He breathed in deeply, inhaling her scent as she relaxed against him.

“What time is it?” He mumbled as his hand started to roam her body.

“It’s a little after eight.” She grabbed his hand and held it still, then brought it to her lips and she kissed his knuckles. “I’m too sore, Liam.” She whispered, then laughed as he heaved a sigh and relaxed.

“Damn. There go my plans for the morning.”

“You already had plans for the morning.”

“Did I?” Liam buried his face in the back of her neck and sighed. “I think I’d like to stay here all day, just like this.”

“As nice as that would be, don’t we have some renovations to finish?”

“Your boss would find out.”

“Do you think she’d spank me?”

“Mmm. Calling in sick is sounding better and better. I won’t get fired and I might get a spanking.”

Ashley scooted to the edge of the bed, but yelped, then giggled when Liam quickly recaptured her. She struggled for a moment, but soon Liam had slid on top of her and had her wrists pinned to the mattress.

“Are you sure you’re too sore? Because you’re sort of hot when you wake up naked in my bed. I can’t help it.” He bent down and kissed the side of her neck.

Despite how sore she was, her body responded to his touch, to the way his hands pinned her wrists. He was powerful, yet gentle. His kisses were soft and his cock was stiff as it pressed against her. The only part of her body that wanted nothing to do with him was her stomach, which chose that moment to growl.

Liam laughed and let her go. He flopped down onto his back and shut his eyes. “Okay. Give me ten minutes to grab a cold shower and we’ll grab breakfast before we start.”

“Do you mind if I borrow something to wear?”

Liam sat up and climbed out of bed. “My clothes will be a little big on you.”

“Yes, but I don’t want to go home wearing my dress from last night, and you still have my thong.”

“I’m not giving it back, either.” Liam reached into his dresser and pulled out a T-shirt and a pair of flannel pajama pants and tossed them to Ashley. “Here. You’ll look hot in these.”

Ashley examined the oversize shirt that was covered in swear words. He’d paired it with a pair of pajama pants that were covered in ninja turtles. “I’m not sure hot is the right word to describe this outfit.”

“Are you kidding me? When girls wear their man’s clothing, it makes them ten times more fuckable. It’s hot. Trust me.”