PreORDER BLAST: Of Deception and Divinity by N.D. Jones #GIVEAWAY

OF DECEPTION AND DIVINITY
Death and Destiny Trilogy, Book 3
by N.D. Jones 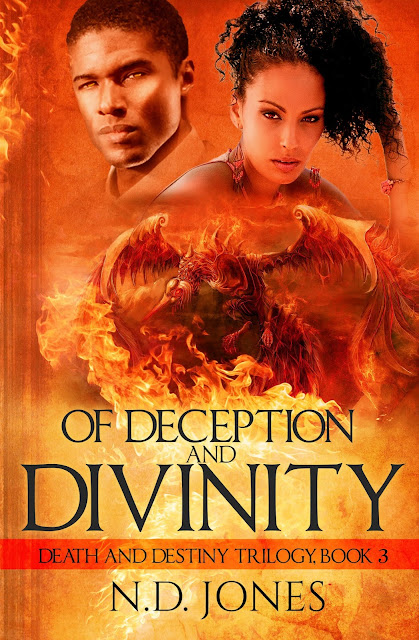 The arrival of a new enemy. The start of a greater battle. A destiny to be defended.

A mighty war, waged every 500 years, has returned to the realm of mortals. And with it, the Day of Serpents arrives to wreak havoc upon the world.

Assefa and Sanura struggle to complete their mate bond, as they also continue their fight in this preternatural war of fire versus water. Unseen enemies, surprise magic attacks, and betrayal lurk at every turn for the couple, and revelations about their powers and past come to light.

As Assefa and Sanura fight to seal their bond and love, destiny and divinity may have already sealed their fate.

“I heard the prodigal son is returning and he won’t be alone.”

Tracey Kemraha shivered, the Grimba Forest not the most appealing place to meet. Yet the darkness and lateness of the hour, combined with the remote location made this the ideal and safest place to gather, even if she’d rather be any place other than there, and with him. Yet there they both were, surrounded by towering trees, muggy air, and long-awaited anticipation. No one could see them together, which made tonight’s outing, so close to the eve of their plan, both dangerous and important.

They had too much to lose, especially her. The tall, arrogant man, dark eyes devoid of any emotion, except contempt, stared at her, his green-and-black military fatigues blending into the forest in a way her royal blue outfit did not. And how she despised him, her means to an end, just as much as he loathed her, their alliance temporary and mutually beneficial.

“I see you still know far too much that takes place within the presidential compound. I would guess a spy if I didn’t believe you were capable of finding out all you needed to know by yourself.”

His sneer and slight baring of teeth reminded her, intentionally, she knew, of his power and standing. Out there, and all alone, there would be little Tracey could do if he decided to wrap his hand around her neck, breaking it as easily as he did the trust of those who dared to love the pampered prince.

If given enough time and physical space, she could defeat the were-cat in a one-on-one battle. But shifters like him understood the weaknesses of witches, preyed on them, counted on them, and took advantage of those weaknesses. She didn’t bother stepping away from the predator. He would only follow, guaranteeing she’d have only a second to begin a spell. Then he would be on her, ripping her throat out with fangs or claws and leaving her bloody, dead body to the scavengers.

“I have my means, but I know nothing of the woman who’ll be accompanying the second son of the Sudan. What can you tell me about her?”

She didn’t like it, hadn’t seen Assefa in years. Not that he hadn’t been home since he’d departed for the States. He had. But he’d come and gone, never once seeking her out, angering Tracey with his continued stubbornness. He was hers. And it was high time he stopped running and returned home—for good and to be with her, his mate. Yet, if the rumors were true, Assefa wanted his family to meet some woman he’d met in America—a totally unacceptable turn of events. 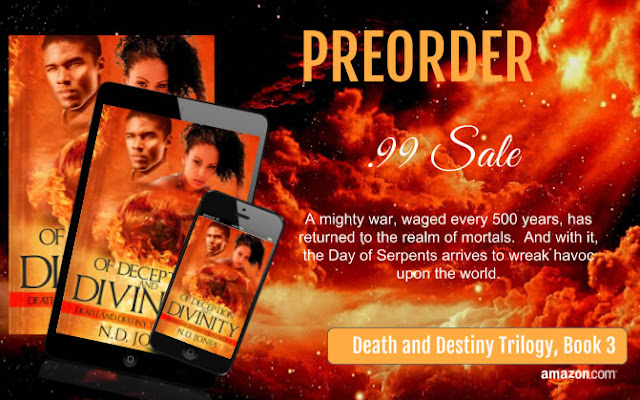 Of Fear and Faith

Before trust and love can take hold, grow solid roots, and blossom into a reality larger than self, fear must be conquered and faith embraced. Yet fear of an ancient prophecy, of burning magical power, and a broken heart, Sanura Williams, psychology professor, is unprepared when Special Agent Assefa Berber enters her life, hunting a preternatural serial killer. Assefa's intelligent, chocolate eyes and intoxicating aura signature stirs her fire spirit but frightens the woman.

In a world where all is not as it seems, Sanura and Assefa must battle the gods' first creations - vile predators who threaten the safety of humans. Each confrontation, each bloody clash, will bring Sanura and Assefa closer to fulfilling the prophecy of being the Fire Witch and Cat of Legend - the ones who will save humanity from the Water Witch of Legend. Death, godly magic, and physical attraction draw Sanura and Assefa to each other, but fear and faith will determine their destiny.

Of Beasts and Bonds

In a world of mystery and magic, sometimes old bonds must be broken before new ones can be formed. Who knew that finding one’s soul mate would test bonds and unleash beasts?

Mami Wata and Oya are now free from their watery prison and ready to wage a battle five hundred years in the making. Special Agent Assefa Berber and Dr. Sanura Williams are the prophesized Cat and Fire Witch of Legend. To save the world from Mami Wata, a water goddess with a bloody thirst for power and an insatiable appetite for death and destruction, they must defeat her beasts and the Water Witch of Legend.

Assefa and Sanura are fully in love but possess only a partial mate bond. While Sanura has merged their auras, bonding Assefa’s cat spirit to her, she has yet to accept his claiming bite. Their incomplete mate bond and their new relationship are tested when Mami Wata sets her malevolent eyes on them, manipulating beasts, sacrificing humans, and creating heartache. Can their bond survive, or will they drown under the vicious tide of godly might?

N. D. Jones lives in Maryland with her husband and two children. She is the founder of Kuumba Publishing, an art, audiobook, eBook, and paperback company. Kuumba Publishing is a forum for creativity, with a special commitment to promoting and encouraging creative works of authors and artists of African descent.