L@@K at ME! Not a Gentleman by Loreen Augeri #GIVEAWAY

NOT A GENTLEMAN
by Loreen Augeri 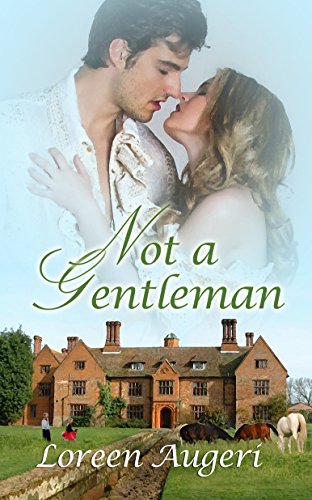 When Juliana Stevenson’s father dies under suspicious circumstances, her greedy uncle betroths her and her sister to vile men for his profit. They refuse to be part of his plan and flee, but her uncle hires an arrogant, demanding man to bring them back.

Needing money to care for his brother and sister and repair a manor in disrepair, Nicholas Blackstone agrees to find the women. He captures Juliana but not her sister and imprisons her in his manor until he can discover the whereabouts of her sibling.

Juliana’s body calls to Nicholas, but she can never be his — her life is already mapped out. Can they fight the passion pulling them together while her father's killer stalks them?

The small, warm form lay still below him. Had he killed her? No. Her ragged gasps penetrated his fear. Nicholas hadn’t meant to land so hard, but the aggravating chit deserved it. She held a gun on him and threatened to shoot!

But she was a woman, and a small one at that. He jumped off her, grabbed her arm, and hauled her to her feet.

“Let go…of…me.” She panted as she fought to catch her breath.

“I don’t…know. Probably. You pounced on me.” She fought to free herself.

Miss Stevenson brushed the dirt from her bodice and skirt. “You tried to kidnap us.”

“I wasn’t kidnapping you. I was returning you and your sister to your uncle. He is worried about you.” He strode to one side of the cave and scooped up the gun lying beside the wall.

“He doesn’t care for us. His concern is how much money our marriages will bring him.” She examined her palm and winced. “We won’t go back.”

“He is your guardian.” He peered at her hands. “You cut yourself.”

“Well, Miss Emily isn’t, and he wants you both. Where will your sister hide?”

She walked away. This female who didn’t reach his shoulder actually walked away. He thought this job would be quick and easy, and he would soon be with his brother and sister with money to start repairing the crumbling estate he inherited, so he could return to the army where he belonged. Where exasperating women didn’t question his orders and answered when asked for information. He ran to catch up and grabbed her elbow. “Where are you going?”

I have always liked to read and write. As a child, I created stories featuring a young girl and her horse.

I started reading historical romances when my children were babies. When my youngest daughter started school, I decided I wanted to write one. At first, to see if I could, later as a hobby, and then seeking publication. Becoming a member of the Romance Writers of America, Hearts Through History, and my local chapter, New England Chapter helped in the process.

I live in the Northeast with my husband and two adult daughters and work in my local library. When I am not reading or writing, I enjoy walking, dancing, and spending time at the beach. I am the one under the umbrella, wearing a hat, sunglasses, and tee shirt over my bathing suit. I have my English and Irish ancestry to thank for my white skin that burns easily.