THE REAPER'S KISS
by Dale Ibitz 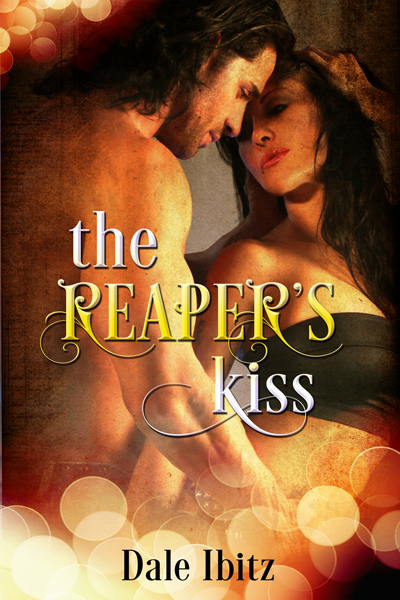 Sex and poison aren’t enough to help William forget his status as a shunned reaper with a sordid past. Rejected, disgraced, and hopeless, he straps on his emotional armor so no one will ever hurt him again. His path to redemption for his sins is side-tracked by Natalie, an exquisite human trying to save her sister from the horrors of the Other World. But then Natalie’s reckless actions sets William on a collision course between his past and his present: a demonic tyrant who wants William back in her bed; the sadistic daughter of an angel who wants revenge on his murdering mother-goddess; and the mother-goddess who demands obedience and love from William, her favorite child. After learning the dark secret of Natalie’s past, how much will he sacrifice to save her soul?

Half-smiling, he leaned against the house. The little doll was proving too entertaining to leave just yet. He could spare five minutes of his time. “What’ll it be, doll? What are you willing to do for information?”

Pushing himself off the building, he strode the three steps to bridge the gap between them, moving so fast she stumbled back into the opposite house. He leaned his forearms on either side of her face, pinning her. Nectarine-scented heat leaped between them, making his muscles tremble. He was pushing the envelope, but this little piece was too tempting to walk away from now.

“Anything?” he murmured close to her mouth.

Her pink tongue slipped out and ran across her lips, mesmerizing him. He could taste her anxiety and physical attraction to him. Him. No fear of what he was, or what he could do. At least for now. How long before she ran just like the Abby? He let the weight of his stone heart fall, squashing all feeling for the last person to reject him.

She panted against him, her warm breath fogging his brain. He let the arousing sensation swirl around him for a moment, savoring the feeling, wanting to lose himself in her. What harm would one kiss do?

Thinking of his past, he knew it could do a lot.

Her gaze flitted between his mouth and his eyes. “You smell like ripe grapes being toasted by the sun.”

“You can smell that?”

He licked her ring, the warmth of her lips melting into his tongue. Moving past it, he traced her mouth before sliding inside. Heat exploded. She opened, their tongues gliding together. Hardening, he pressed against her. Her hands looped around his neck and her fingers trailed up his skin before burrowing into his hair.

She tasted wonderful, the alcohol on her tongue mixing with wintergreen. He deepened the kiss, tasting, stroking. Time ceased to exist. He ceased to exist. All that existed were Natalie’s scent, touch, warmth. She welcomed him in, making his jeans cause unbearable pressure against his thickening erection.

More. Rubbing himself against her, he fisted her hair and pulled her head back. He nibbled her exposed neck before returning to her mouth and easing more seductive heat from her tongue until she shivered.

Gods below, so warm, so good.

A loud bang snapped him from his daze. Shaking his head, he glanced over his shoulder. Hoots followed another round of pops as kids from the party lit firecrackers. He turned back to Natalie, caught in her dreamy gaze, trapped by the warmth binding them, stunned at the depth the kiss had reached.

She brushed her swollen lips. “Your eyes are glowing.”

Silent, he congratulated himself on his saintly control. Instead of skimming her soul, he’d simply enjoyed the kiss. Still, he was treading dangerous ground when it came to her scent and warmth. Next time he might not be so saintly.

Dale Ibitz was born in Oxford, Connecticut, grew up in the state of Washington, and then re-located back to Connecticut as an adult where she studied English at Central Connecticut State University. She never left, choosing Connecticut as her permanent home. Dale’s a fan of hiking and the outdoors, loves alternative metal music, and she never, ever starts the day without chocolate and coffee (preferably together).