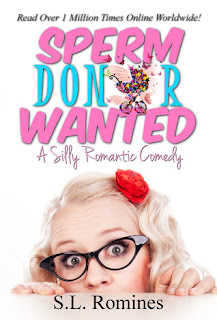 Sperm: /noun/: White ribbon-like goop that shoots from a dude’s bologna pony when he blows his load.

{Gia}
Call it what you want. All I know is I need it. All of it. A fully loaded turkey baster or a bucket chock full, it doesn’t matter. I need the love liquid, and Roman Blake is just the dude for the job.

{Roman}
When I realized that the woman ditched in front of my house was in fact Gia Avery, it was literally a blast from the past kinda moment. But it was when I found out why she was here that made me nearly lose my shit.

This is the crazy, out-of-bounds, totally insane, whacked out to the core, piss your pants, make-your-mama-scream, funny as hell story about Gia and Roman and what it means to take sperm donation to a whole other level.

Author’s Disclaimer: This book is stupid. No, seriously. It’s stupid, and I think I may have even lost a few brain cells in the process of writing it. It’s downright moronic. You have to be a special kind of person to appreciate this level of dumb. This book is absolutely not intended for the uptight, unhappy, snooty, humor-lacking folks out there. If you do not have the sense of humor like a pack of teenage boys or if you’re missing your funny bone, you should seriously look elsewhere for a more intelligent kind of read because this hot mess is not for you. But if you’re anything like me and find shit funny just for the sake of finding shit funny then you are my spirit animal.

This story has been re-worked, scrubbed, polished and douched and has been turned into an original fiction for your reading enjoyment!

This story is intended for mature audiences.

Buy it on Amazon

Add it on Goodreads

And when the thirty-year-old, single woman realizes it, she freaks out… then comes up with a plan. It is the 21st century, after all, so who says things need to happen the old fashioned way? She’s a strong, independent woman who doesn’t need a man to be a mom. She just needs his spunk.

Growing up, he was the stuff Gia’s dreams were made of, and he happens to be her BFF’s cousin, so why not? The problem comes when Gia asks her BFF to reintroduce them, and she finds herself out in the back forty with a rousing cast of characters who are NOT playing with a full deck. As time goes on, Gia comes to learn they ARE playing with full hearts, however.

Sperm Donor Wanted is a whirlwind romance that will have you laughing one moment, cringing the next, and going “aww” after that. Romines’ tongue-in-cheek, sometimes crass humor may not be for everyone, but if you have an inner prepubescent boy somewhere inside you, you’re going to find your cheeks hurting from smiling and laughing.

*I was provided an ARC by the author in exchange for an honest review.