RELEASE BLITZ: Little Love on The Prairie by E.M. Denning

LITTLE LOVE ON THE PRAIRIE
by E.M. Denning 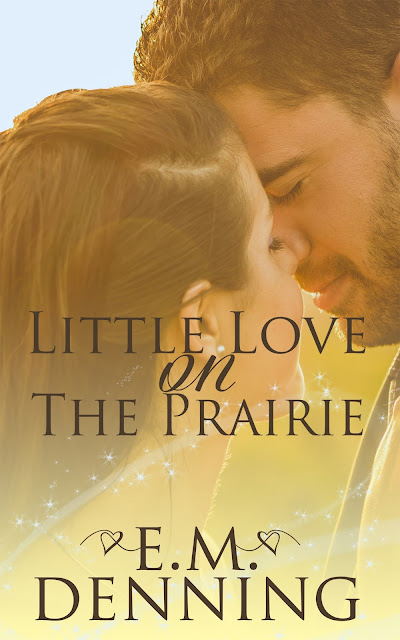 Selene Hawes is no stranger to running away. She ran away from Black Creek four years ago, and now she runs back to it.

Clint Porter spent four years trying to forget her. When she shows up out of the blue, it feels too good to be true.

Secrets, revelations, and unexpected danger can make or break their relationship. Can he believe she's back to stay? Can she trust him with her heart?

Can life on the prairie heal all open wounds and make true love blossom?

The prairie grass was an endless shimmering sea. I was usually not so conscious of the sun, but today it was a scalpel in my brain, and sunglasses only softened the pain a little. Thankfully, darkness wasn’t far off. I whizzed past a dozen more sun-faded billboards advertising hotels and restaurants at the next town. I wasn’t staying in the next town, though. I was going home. I’d crammed everything I could into my Honda Civic, emptied my bank account, quit my job and left no forwarding address.

Exhausted, I stopped at Tim Horton's for an extra-large double-double so I could keep my eyes open. I’d been up for eighteen hours, and had at least another four or five to go before I was home. I spent the drive cursing the monotonous ocean of boring prairie grass and swearing at my stupid self. No more guys. No, I couldn’t swear off the whole gender. I was almost positive there was still at least one nice guy left out there. Almost.

No more assholes. No more control freaks. I made a mental list of all the things I wanted to avoid in the future. No more love. Love was stupid. Love was a trap. It grabbed you by the heart, then when you weren’t looking, it punched you in the face. I glanced at myself in the mirror and frowned. My sunglasses only covered some of the brilliant purple that surrounded my eye. I looked back at the road. Two more hours until I’d be home.

My mental list continued. Relationships were bad news. I should try to stay single for a while. I’d decided that when Jay had punched me in the face. I needed some time to myself. Some time to find myself, figure out who I was and all that other cliché shit. Basically, I needed time to drink myself into oblivion, cry myself stupid and eat my weight in chocolate as I examined all the shitty choices that led me to this point in my life.

The destruction of my life was so swift and complete I half expected Jay to call my cellphone any minute. Except I’d thrown my phone out the window four hundred miles ago. I’d watched it hit the pavement, then explode into a million pieces. I could hear Jay in the back of my mind, yelling at me, screaming at me. The vein on the side of his head bulged whenever he yelled.

You can’t run away from your problems, Selene.

I touched the tender skin on my face. “I’m not running away from my problems, Jay. I’m getting rid of them.” I removed my sunglasses and dropped them onto the passenger seat. The sun was gone, and the last shimmers of daylight vanished with it.

An hour later, I rolled into Black Creek, population just over three thousand. My final destination was a farm a half an hour past the other side of town. I pulled into the gas station and thanked my lucky stars it was a self-serve. I slid my sunglasses back on and got out to pump my gas.

Forty dollars later, I jumped back in and turned the key. Nothing.

Panic. I turned the key again. Still nothing. I suddenly hated that I’d tossed my cellphone out of my car and smashed it on the highway. I’d have to brave going inside to call for help. I pulled my hair out of its ponytail and hoped my long, red locks would draw attention from the bruise I tried to hide.

“Do you have a phone book?”

If I was a better person, I wouldn’t need to look up the number. I’d remember it because I’d have called to say I was coming, which would have meant calling at all. I hadn’t in the four years I’d been gone.

The kid passed me the phone book, and I found the number fast enough. I’d swallowed my pride when I’d resolved to leave Jay and come back here. Three rings later, he answered. His voice hadn’t changed. He didn’t sound any older. I found myself wondering if he’d aged at all since I saw him last.

I heard him breathe out as if he’d been holding his breath for four years and was just exhaling now. “How are you, kid? It’s good to hear from you.”

I hesitated, took a deep breath and screwed up the courage to speak. “I need a favor.”

“Are you in trouble?”

“You’re in Black Creek? Jesus, Selene, what are you doing all the way out here?”

I bit my lip to keep my emotions in check. There was a silence, not a long one, but long enough to make me worry that I’d made more huge mistakes.

“I’ll have the coffee on when you get here.”

“Can you make it strong?”

“Can you turn it into whiskey?”

I heard the concern in his voice. I’d have a lot of explaining to do later.

I handed the phone back to the kid, who just now noticed my black eye.

“Holy shit, lady. Somebody hit you?”

I scoffed. “No. I walked into a door.” I sneered and walked out.