LOOK at ME! Band Geeks and Riptides by Monica Duddington 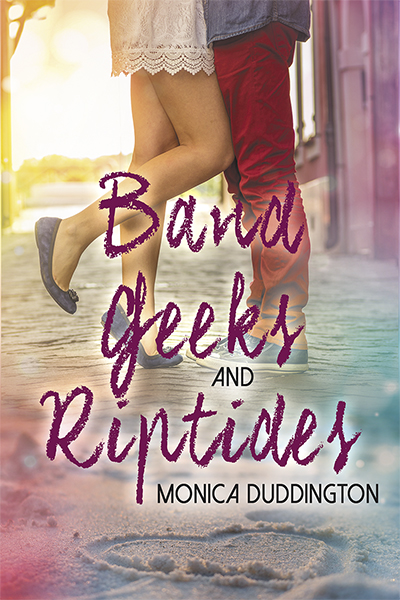 Can a homesick band geek find happiness in Surf City, USA?
High School band geek Olivia never asked to move from her hometown in Oregon with its motto Keep Portland Weird, to Surf City, USA, a.k.a. Huntington Beach, California. However, just before her senior year that’s exactly what her mother decides they will do. Olivia finds herself in a foreign land of surf, sand, and sun where she’s not even sure she speaks the language. She’s convinced she’ll never fit in.
Homesick and desperate to find her place in her new school, Olivia makes some potentially serious mistakes. But has she missed noticing friendships that have snuck up on her? And then there’s the enigmatic drummer Sean, who seems to be making Olivia’s heart beat some odd rhythms.
Maybe it’s not time to give up on Surf City, USA.

The following excerpt takes place at a marching band practice for the percussion instruments. Olivia, who plays marimba, loves this kind of practice. After a couple of miserable weeks being homesick she’s about as happy as she’s been since moving from Portland, Oregon to Huntington Beach, California. At an earlier practice she had noticed a tall boy who played drums and was wearing a fedora.
*
Tall Boy With Fedora is approaching me. I don’t look away, just watch as he gets closer. I’m still smiling. And swinging my arms.
“You shouldn’t squint.” He points at my eyes.
“Huh?” I have to tilt my head back to see his face. It’s way up there. I’m short. Really short. Five-foot-three on an especially tall day. There’s a sneer on his face, like he can’t believe I’m so stupid to be squinting.
“When you were playing. I saw you squinting into the sun. It’ll give you a headache.”
Tall Boy With Fedora removes the hat and gently places it on my head, where it falls all the way to my eyebrows, it’s so large. He takes the front rim and scoots it up my forehead a little, angling the hat.
“There. That will help you,” he says, as he runs a hand through his brown hair, mussing it up so it’s going every which way. The gesture allows me to catch a glance of a tattoo on his inner forearm. Not a picture of anything, more of an intricate design.
He’s eyeing me and his hat sitting on my head.
“Um, thanks. But don’t you—”
“I’m used to practicing in the sun,” he interrupts me. “Portlandia people aren’t so used to it, I’m guessing.”
He’s turning to walk away. “Wait,” I say to his retreating figure. “How do you know where I’m from?”
Looking over his shoulder, he smiles at me. Smiling is a good look on him, much better than sneering. It brings light to his dark brown eyes. “Don’t know. Heard it around I guess.” He shrugs and continues on his way.
I run a finger along the rim of the hat and watch him as he starts talking to a group of friends.
Now I wish I knew Tall Boy Without Fedora’s real name.
* * *
It’s heaven.
More than two hours of nothing but percussion. My mallets fly as if my hands aren’t guiding them. Everything we play is something I already know, and most are old favorites. The late-afternoon sun is warm, and the marine air caresses my skin. Marine air. Not concrete and asphalt air. Today it’s sweet and salty. I can’t stop smiling.
During our first break, I chat with Grace and even Kevin. Twice my eyes wander to Tall Boy, and I catch him staring at me. Probably making sure I’m taking care of his hat.
“Hey, why you wearing Sean’s hat?” Kevin asks.
Sean. Tall Boy Without Fedora has a name!
“You mean the tall drummer with the mussed-up brown hair?” I ask, just to make sure.
“Yeah, what’re you doing with it?” Kevin’s acting like I’m standing before him with an AK-47 or something.
“He thought I was squinting too much, so he lent it to me for the practice.”
“Huh, he never lets anyone even touch that hat.” Kevin peers in the direction of Sean, as if to find the answer. “And, well, even though Sean’s a friend and all, during practices he’s not exactly the friendly type. More the keeps-to-himself kind. Really into his music. Not the kind of person to just give a stranger a hat.” He’s shaking his head in disbelief.
“Don’t know,” I say. “But it was nice.”
This time I peek at Sean, catch him looking at his hat, and smile at him. One corner of his mouth goes up, and he quickly looks away. 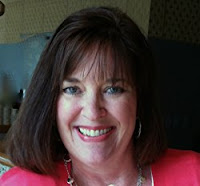 Despite the fact that at the age of three, Monica Duddington had two imaginary friends who were motorcycle-riding men from Santa Monica who lived part time in a utility shed at a reservoir, her parents never got her into therapy. Today, many years later, any imaginary friends who might pop up get to have their day as characters in her novels. Monica writes paranormal, historical, and contemporary young adult novels.
Monica is quick to admit that she has a serious reading addiction—an addiction she likes to foster. She can’t live without her husband and family, chocolate, tea, red wine and, of course, stacks of books.
Though she grew up in the beach towns of Southern California, home is Oregon, and has been all her adult life. She loves the mountains, trees, beaches, and wine country of the Pacific Northwest, and even the rain, since it encourages people to curl up with a good book.
In addition to writing young adult fiction, Monica also writes mysteries and paranormal romances under the name Monica Knightley.
Website ✯ Twitter ✯ Goodreads ✯ Amazon ✯ Blog
Posted by From the desk of... R.E. Hargrave at 12/13/2016 12:00:00 PM