RELEASE BLITZ: The Tin of Honey by Holly Barbo

THE TIN OF HONEY 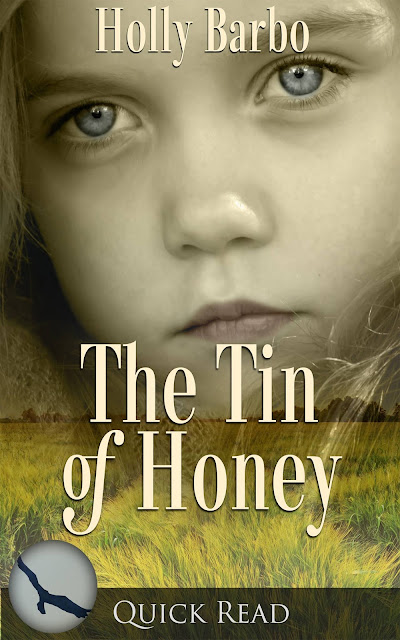 Life is tough for Zoe in the new world. As a small child, her voice can never be heard and she may as well be invisible. Except as a slave.

The child opened her mouth to answer. Nothing happened. She tried again but not even a squeak emerged. Looking around, Zoe picked up a stick from the pile near the tent and wrote in the dirt: ZOE.

The little girl shook her head.

“Well, no matter. Let’s get some food in your belly and perhaps we can get you cleaned up afterwards.”

Zoe was given a bowl with a ladle of stew. She was so hungry she forgot the manners her parents had instilled and brought the bowl to her lips, slurping the first food she’d had in days.

The woman called to her husband in the tent. “Better come eat. I found a starving waif and she could probably eat your portion, too.”

The man who came out of the tent was big and had a bandana on his head. Zoe immediately jumped to her feet and, dropping the empty bowl, began to back out of the firelight.

“Sit and eat, Cane. You are scaring the child.”

The man gave the ragged girl a dismissive look and filled his bowl.

Turning to Zoe, the kind woman motioned the youngster back to the fire and, picking up Zoe’s bowl, ladled more stew into it before she prepared a bowl for herself.

Zoe couldn’t be sure, but the man looked like one of the soldiers who’d killed her parents. Her eyes large with fear, she couldn’t keep from staring at him as she chewed the last of the offered stew.

The woman picked up the bowls and grabbed a bundle from the tent. She put her hand on the little girl’s shoulder but turned to her husband. “Go on to your meeting with the other officers. Zoe and I will be at the stream.”

“I may be late, Maude.” And with those words Zoe knew beyond any doubt he had been with the group who’d killed her parents, and had certainly slit her mother’s throat.

Maude led Zoe downstream from the camp, and in a secluded little cove she handed the girl a sliver of soap. “Go wash up. I brought an old camisole of mine and some twine. It will do until your clothes are dry tomorrow. My husband has just received a promotion because two officers in his group were killed in a rebel skirmish. We’ll be leaving for the front in the morning.”

She chattered on as Zoe took advantage of the soap and scrubbed off the grime and blood. Maude worked on cleaning the stains from the child’s clothing. She suspected some of the soiled areas were blood stains but a glance at Zoe’s body only showed superficial bruises and scrapes. She wasn’t going to question the frightened child. It wasn’t important.

As the child emerged from the water, Maude handed her a towel. “Where are your parents, child?”

Zoe looked down, not wanting to meet the kind woman’s eyes as fresh tears rolled down her face. How could she tell this woman that her husband had murdered her parents but had never seen the little girl hiding in the root cellar? Or that the elevation in his rank was due to her father killing two men. The woman was nice but it wasn’t safe for Zoe to be near her husband. The little girl was leaving as soon as she could.