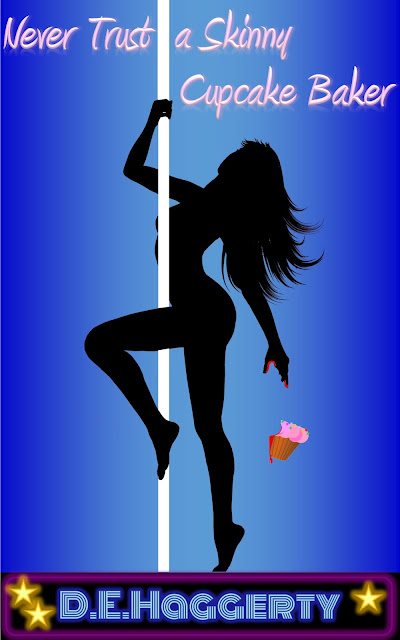 A cozy mystery with a heap of laughs, a generous portion of romance, and just a smidgen of suspense.

Callie’s life is rather awesome. She owns a successful bakery and teaches German literature at the local university. There’s just one tiny problem. She has no self-confidence when it comes to her body. And then there’s the little matter of her being accused of murdering her pole dancing instructor. There’s no way Callie’s going to risk losing her teaching position and thus she embarks, with her best baker bud Anna, on a journey to discover the real killer. Between stripper auditions and a detective who insists Callie is the woman of his dreams, it’s a roller coaster adventure. Cupcakes not included.

I set my menu down. “You’ve never had sushi? Why’d you bring us here then?”

He shakes his head. “When are you going to get it into your head that I’d do anything for you?”

“The Tokyo earthquake of 1923 brought sushi into restaurants. Before that, sushi was just a street food, but the quake destroyed much of the city and that caused real estate prices to drop so that sushi chefs could afford real restaurants.” I clamp my hand over my mouth when I realize that I am once again spouting weird trivia because Ben’s words unnerve me.

Ben grins and shakes his head. Then, he surprises the daylights out of me by leaning over and giving me a hard kiss. “You are the sexiest nerd on the entire planet.” He picks up his menu again as if he didn’t just rock my world. “So, what should I order?”

I let his ‘sexiest nerd’ comment drop because there is no appropriate response to crazy. “Is there anything you don’t like?” He shakes his head. “Afraid of raw food?” Another shake. “Okay, let’s order a platter with a mixture of everything.”

He sets his menu down and nods. “Sounds good. Do you think it will fill me up?”

“Well…” I scratch my head and look at Ben’s massive shape. “Maybe we should order some tempura.” The words are barely out of my mouth before I’m taking them back again. “No wait, that’s a bad idea. I shouldn’t be eating that.”

“Why not? Are you allergic?”

“No, not allergic. Tempura is fried. I should stay away from anything fried.” I fidget in my seat, uncomfortable with my confession.

“Why?” He looks genuinely confused.

I roll my eyes at him. “Because I can’t afford to gain any weight. It’s bad enough I run a bakery.”

Ben captures my hands with one of his enormous hands and grabs my chin with the other one. “I said no more putting yourself down.” I start to protest, but he pinches my chin to quiet me. “You’re gorgeous. I love your curves. You look like a woman should. Man, you’re so sexy, it was all I could do to not drag you into your apartment and have my way with you when I arrived and saw you in that sexy as all get out dress.”

Finally, he’s quiet and I think I can get a word in edgewise. Ben’s not that easily deterred, however. He leans forward and stops any response I would have made with his lips. He nibbles on my bottom lip like I’m some kind of delicacy. When he thinks he’s made his point, he leans back and releases my chin although my hands are still encased in one of his over-sized mitts.

I hear a sigh behind me and look over to see Mikki. “Oh man, that was hot. Do not let him go, Professor Muller.” She flips open her order pad. “Now, what do you want to eat?”

I grew up reading everything I could get my hands on from my mom’s Harlequin romances to Nancy Drew to Little Women. When I wasn’t flipping pages in a library book, I was penning horrendous poems, writing songs no one should ever sing, or drafting stories which have thankfully been destroyed. College and a stint in the U.S. Army came along, robbing me of free time to write and read, although I did manage every once in a while to sneak a book into my rucksack between rolled up socks, MRIs, t-shirts, and cold weather gear. A few years into my legal career, I was exhausted, fed up, and just plain done. I quit my job and sat down to write a manuscript, which I promptly hid in the attic after returning to the law. Another job change, this time from lawyer to B&B owner, and I was again fed up and ready to scream I quit, which is incredibly difficult when you own the business. Thus, I shut the B&B during the week and in the off-season and started writing. Several books later I find myself in Istanbul writing full-time.