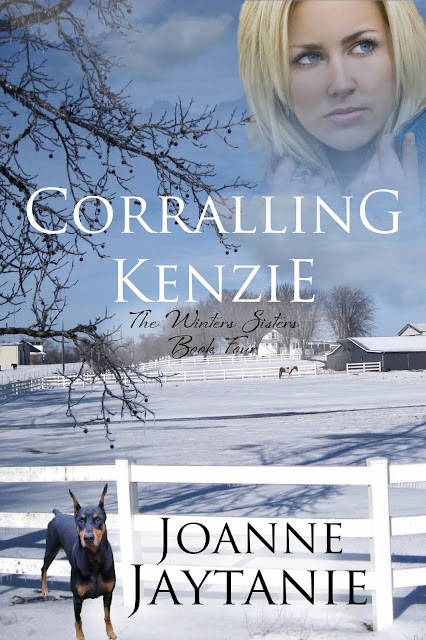 Will Kenzie ever find peace and security inside the corrals of her ranch again?

Kenzie Vaughn is lucky to have a big-city, big-paycheck position. But her great job serves as nothing more than the path to her dream: a horse boarding and training ranch outside the big city. Kenzie is a horsewoman who loves Dobermans and peaceful country living. Now she’s found the perfect ranch, right next door to a lovely campus that houses the Winters Corporation. Her luck is holding, for the Corporation is run by the Winters’ sisters, wonderful women who could easily grow to become great friends.

One night her peace was shattered by a gunshot that wounded her horse, Boone. Good thing for Kenzie, Victory Winters is a veterinarian. Still the gunshot was no accident, and Kenzie’s past and the Winters’ present are dangerously intertwined. Kenzie is sucked into a vortex of rogue scientists who only want her for her DNA. Fortunately, the Winters Corporation can help. Even better, a Special Ops team member, Logan Mendoza, is assigned to watch her ranch. He isn’t interested in Kenzie’s DNA; he wants her for much more. Logan takes Kenzie’s personal security personally.

“Kenzie, you’re ice cold, your hair and clothes are soaked. Let me help you into a nice hot shower. When you are finished, I’ll have a hot cup of tea waiting,” Victory said.

Kenzie merely nodded her head and stood up. Victory guided her up to her bedroom and shut the door behind them. Logan pressed a speed dial number on his cell.

“What the hell, man? This better be life or death. I just hit the bunk two hours ago,” Jack’s groggy voice answered.

“It will be. Yours if you don’t drag yourself from your warm, cozy bed and get your ass to your computer as soon as humanly possible.”

“Victory and I have spent the last two-and-a-half hours at her neighbor’s. Someone shot her horse, and while we were dealing with the injured animal, the shooter tossed her house. Too soon to tell if they took anything yet; however, she did notice one of the family photo albums is missing.”

“Are you saying that diseased Kaleidoscope Group and their madman of a chairman are spreading their terror out onto the surrounding neighbors?”

“I don’t know anything for sure. All I can say is, this doesn’t feel like the run-of-the-mill smash and grab. I need you to start a search on ‘Kenzie Vaughn.’ Victory and I will be staying here for a while longer. We are going to suggest she contact the police to report the attack.”

“What the hell for, man? All they’ll do is muck up the works.”

“At least while they’re doing that, Kenzie will have someone out here watching out for her.”

“Ah, I see your point. You can’t get her to come to the campus?”

“Victory only met her tonight. What would we say to her? When are Wyatt and Tristan scheduled to return?”

“Not until the day after tomorrow.”

“Okay. Send them a text. Tell them we have a potential 9-1-1. Let’s get a meeting scheduled for tomorrow.” Logan looked at the time on his phone, nearly four in the morning. “It would be great if I could get a little nap before then.”

“You and me both,” Jack grumbled as he disconnected the call.

Catch up with The Winters Sisters. 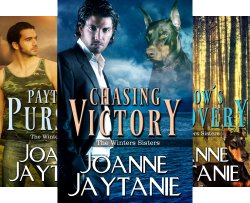 Joanne was born and raised in Sherburne, New York, a quaint village surrounded by dairy farms and rolling hills. From the moment she could read she wanted to explore the world. During her college years she slowly crept across the country, stopping along the way in Oklahoma, California, and finally Washington State, which she now proudly calls home. She lives with her husband and Dobermans, in their home located on the Kitsap Peninsula with a panoramic view of the Olympic Mountains.

Joanne writes romantic suspense, paranormal, and contemporary romance. She loves to submerge herself in the world of her characters, to live and breathe their lives and marvel at their decisions and predicaments. She enjoys a wide variety of books including paranormal, suspense, thriller, and of course romance.