THE FOUNDERS
Book 1 of the Sage Seed Chronicles 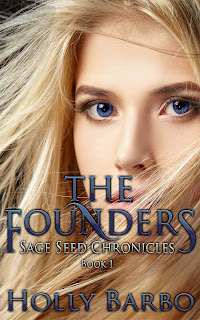 There are no monsters on Ose. People can be monstrous enough.

Disaster strikes the beautiful world of Ose. Marisily is one of the Sages who can help heal the planet when nuclear winter pushes the civilization back to the brink of destruction. Only she doesn’t know her own powers yet.

It is survival of the fittest as vicious outlaws destroy all that remains, kidnapping, enslaving and killing those weaker than themselves.

With a bounty on her head, alone and betrayed by her own father, can a young woman find the strength and wisdom necessary to rally the good people of Ose and rebuild their culture?

Sari worsened as the day wore on. She was too weak to fight off the effects of the abuse and the fever at the same time. Marisily was at her mother’s side when she died. She closed her mother’s eyes and wrapped her in a clean sheet. Then she sat at her mother’s side and rocked back and forth as the tears rolled down her cheeks. Eventually, her sobbing breaths quieted and she wiped her cheeks.

Dazed, Marisily resumed her duties. She had made a stew in the afternoon with the thought that the broth would be nourishing for her mother. Now she served it to her father for dinner. Jed came in from his workroom and started eating when Marisily quietly said, “Mother’s dead. I have prepared her for burial.”

Jed gave his daughter a long look before he answered. Marisily sensed he was considering saying something that she wouldn’t like and she steeled herself for it, but when he spoke all he said was, “I am sorry to hear that. She was a good wife. The only thing she didn’t do was give me a son. I’ll move her body to the workshop before I go out tonight.” He scooped another piece of meat from the stew and chewed thoughtfully. “Daughter, I don’t think I can continue to support you. I will give you a choice. Rory, the herder, needs a wife. He’s a friend of mine. I don’t believe he has ever cleaned his place and though he is eight years older than me, he is lusty enough to keep you busy. I think he could take you to wife tomorrow. Or you could leave. It makes no difference to me. As your father, I don’t need to give you a choice, but since I’m grieving the loss of your mother, I will be generous. If you are still here tomorrow morning, I’ll know your decision is to wed.” He finished his meal and pushed back from the table. “I am going into Morraton to meet with friends. I’ll bring my new wife home after I bury Sari tomorrow.” Jed put on his heavy coat and smiled to himself as the door closed behind him. He didn’t believe his daughter had enough warm clothing to survive. She would either set out tonight and freeze to death or would stay and leave with Rory tomorrow. It didn’t make any difference to him. She would be gone either way.

Marisily cleared the table, giving her father time to go down the trail to town, keeping an eye on the window until he disappeared from sight. There was no way she was going to remain. Angry at her father’s offhand comments, total insensitivity and arrogance, she was also fully aware of her danger. Marisily had been very lucky that her father had given her a choice. She had been thinking about where she would go. There was a place that she had seen several years before. At the time, Jed had been gone on a journey to obtain yarns spun in Osily. Sari and Marisily had ranged miles from the cabin picking berries. They had separated, to cover more area. Marisily thought hard about where that place was. They had meandered through the foothills during that gathering trip.

She brought out her coat, and put on all of her warmest clothes as well as a few things of her mother’s. Her father would never allow her to leave with anything he deemed his property and that included everything in the home. Marisily knelt by her bed and, rolling back the rug, she removed the floorboard. She pulled out a heavy, knitted hat, scarf and gloves that she had made for her mother’s upcoming birthday and donned them. Her mother would be happy that she was using the gift to survive. Quickly, Marisily emptied her secret cubbyhole of her journal and other small treasures. Gathering what she could carry that she felt her father wouldn’t miss, Marisily stepped outside and disappeared from her childhood home. She had no intention of ever coming back.