THE EDGE OF MADNESS

MARCH MADNESS as you’ve NEVER seen it… 15 COMPLETE NOVELS AND NOVELLAS FROM YOUR FAVORITE AUTHORS IN ONE PRETTY PACKAGE. 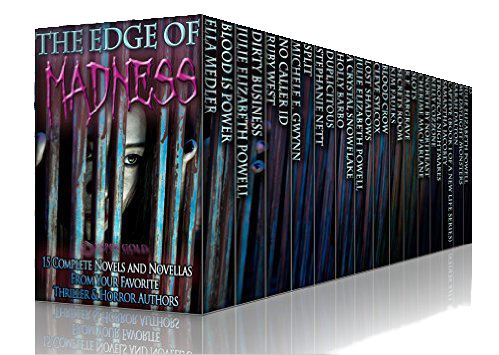 Kick off Spring 2016 with a collection of macabre, suspenseful, and disturbing thriller/horror stories from around the globe. From murder in Vegas to deadly obsessions and down dark rabbit holes so deep, you may never find your way out again. Each story will have you biting your nails, and both fearing and anticipating turning the page! The suspense might just kill you.
A mix of previously-released stories and never-before seen tales, this set holds fifteen new worlds to explore — fifteen incredible experiences to bombard your senses, fifteen sets of characters to love, hate, and run from — Who could ask for more?

What is found within the depths of the human soul? Does wickedness linger, as if the Devil's thumb is ready to pluck the strings of certain choices? And with the strumming, just how far will Evil spread? 13 is the story of random souls pitted against the tragedy of the modern world. Will they decipher the unknown and make it out alive?

You know the saying, ‘What happens in Vegas, stays in Vegas’ . . . well, that’s not always true. Three travelers find themselves running to Sin City in an attempt to right a wrong, only to have it backfire—in a big way. Rated NC-17 for extremely graphic scenes. Please heed warning inside.

First off, the musical inspiration for this horrific short story came from God Speed You Black Emperor, Dark Lotus, Type O Negative, and Alkaline Trio. If you are a child, elderly, or have a heart condition, then this story is probably not for you. If you cannot handle torture scenes and/or have a weak stomach, why are you here? This story is not for you. If you have any problems with language, nudity (and descriptions of such), drugs, forced sexual acts (including gore porn), maiming, torture, forced humiliation, self-mutilation, vomit, urine, blood, snakes, character death and more . . . then I cannot stress enough that this story is not for you.
✯ ✯ ✯ ✯ ✯

Jennifer Jones suffered the loss of her parents in a car accident. Heaped upon her grief and survivor’s guilt is a debilitating layer of domestic abuse from her fiancé, Aaron. It’s all too much, and without warning, she snaps. Free from the moorings that bind us all to rational boundaries, Jennifer finds that stepping across the line and committing murder means she no longer needs to follow anyone’s rules but her own, but has she gone too far? Now that she’s tasted the heady power of controlling her own destiny, she can’t stop!

Down the rabbit hole she goes into a realm of psychotic darkness so deep, she may never find her way out again! Is murder Jennifer’s new reality or has reality skewed, tilting on its axis, writing its own story? Reality is in the eye of the deceiver, after all. Is this new reality real or has Jennifer Jones split?

Jerome's all charm, no substance. At best, he's a talented womanizer. His wife leads a long list of women scorned by him, and one of them carries a deep grudge.

When his life takes a downward spiral, in a blur of binge drinking and hookups, the calls start. Someone's playing a tantalizing game with him, but who?

What would you do if you woke in a room filled with strangers, with no memory of how you got there, and no way out?

Morgan Drimmel wakes to find herself in the midst of this nightmare. The gouged, blood-splattered walls scream of terror and torture, and the unrelenting light that shines between the cracks in the walls fills her with dread.

When the others in the room wake, they form alliances, and Morgan finds herself drawn to rogue biker Slade Rivers. But dependence, for her, has always come with a deadly price.

Those inside the room have secrets too; dark secrets they will go to any length to keep from getting out. When evil rears its ugly head, Morgan will not only have to fight to survive—she will also have to trust.
✯ ✯ ✯ ✯ ✯

As Confederate and Union forces clash in and around the Missouri community of St. Charles, Constance McAdams fights a war of her own. Her mind has been fractured, her heart ravaged, and her soul nearly torn from its very existence. Her husband, Gavin, threatened by a corrupt sheriff and judge, is the binding that holds her together. With a blessing from an old Choctaw woman as her only weapon, she spirals into a maddening world of crows and spirits as she fights the forces pressing in around her.

“Action!” Dollar shouted. Then, quieter, to her. “Oh, I will enjoy watching your end, Precious. Every single second of it. Every cut, every lick of blood, every morsel of flesh that drops off your body.”

Tequila felt her eyes bulge out of their sockets. She was too terrified to breathe, too stunned to think. And still, the beast walked nearer. He sneered, and then lifted up the scalpel until it was level with his chin.
“Don’t forget to scream,” he whispered.

Following his son’s kidnapping and subsequent rescue, Nick Hunter proceeds to track down and eliminate every person involved in the crimes against his family. But where will the chase end? And has he bitten off more than he can chew? Nick discovers a tangled net of human trafficking and corruption, and world-class players with a penchant for disturbed obsessions.

Gritty, dark, chock-full of suspense, this thriller is not for the faint-hearted.
✯ ✯ ✯ ✯ ✯

It was meant to be an easy job; go to my sister’s and update their security system. My sister’s husband is handsome and rich and she lives the epitome of a perfect life. As I work, Reese drops a bombshell and things begin to spiral out of control at a rate far faster than I’m comfortable with. After waking covered in blood, I’m left to piece together the mystery of what happened before I go mad. Or die trying.


When Chayse’s friend is murdered before he can get protective custody, she and her department in Homeland Security are thrust into a race to stop a destructive cyber worm from wiping out all bank and stock market records during the Christmas break. The good news is there is an inoculating code which will stop the worm. The bad news is it is hidden in a special crystal concealed in the sculpted walls of a beautiful ice hotel in the lapland region of Sweden and the terrorists are searching for it too. As the snow flurries of November becomes frozen December each side rush to find the crystal…with entirely different goals. Will the Christmas holiday bring destruction for western financial systems?

Not only had Adam lost his parents in a car crash, but he’d also forgotten who he was. Pamela is haunted by the patient who was murdered by her father. Barbara and Mike have mysterious secrets. Harry seeks solace at the bottom of a glass. And why is Mildred so afraid? While Helen’s mind gathers dust, Lizzie mourns the loss of her, and her husband. Both Penny and Jane are frantic to find their daughters, if in different ways. Rick wonders what to do about his family. And who is William?

Surviving numerous attempts on their lives including the explosion that rocked Tropical Dreams, David Murphy and Tiana Alexander started to rebuild their lives. Living on the beautiful and tranquil island of St. Lucia, they tried not to let the ugliness of Robert Dubose invade every aspect of their lives. They knew he was coming and wouldn't stop until someone was dead.

Robert Dubose planned every second of his revenge against David and Tiana down to the littlest detail. This time he was leaving nothing to chance. Bringing a partner in on the plan almost guarantees his success.

Can David and Tiana once again defeat Dubose or will he finally get his revenge? Will Dubose and his hidden partner finally succeed in killing them? Can David forgive himself for failing Tiana or will their love be another casualty?
✯ ✯ ✯ ✯ ✯

Gavin Bloom and Alex Moore run an online magazine for an adult market; although each insists it has to be within the limits of not only the law but to their sense of decency. Gavin is on the edge of developing a revolutionary turn for that very magazine, a programme that will no doubt secure the business, maybe forever.

Amidst the excitement and enjoyment of its success, however, is the mysterious and heinous murder of one of their own.

Who can have done it? And why?

And who is the woman fastened by a chain to a wall?

Follow the twists and turns and perhaps you can solve the puzzle before they do.

I always thought my demons came out in the day, rather than at night. I’ve never been scared of the dark. I’ve only ever been scared of real things: getting ill, having injections, physical pain… death. Those are my monsters, not ghosts or vampires or whatever else can hide under your bed at night. I was wrong. The dark makes everything worse.

When Mary’s psychiatrist advises a short stay at a psychiatric unit, her worst nightmares are confirmed. How can she get better in a place that fills her with dread? When she meets the other patients, she begins to gather some hope, until she realises that the death toll in the hospital is rising without explanation. Something sinister stalks the corridors and maybe she is the only one who can stop it… Mary has to confront the Things that she sees if they are to stand a chance. But will she survive a confrontation with death itself?
✯ ✯ ✯ ✯ ✯

Without her he is alone in the world. Letting his wife go alone to Seattle, Washington to display her paintings in an invitation only show is difficult. But he has commitments to fulfill. Unease turns to fear when she doesn't answer his call. The "sight" tells him something is horribly wrong. An inept investigator, an obsessed fan and three friends all come together in a tight tale of a race into British Columbia's Pacific Coast as a husband tries to save the only thing he ever wanted, his wife.

A New Life Series is an epic adventure. TORI FARRELL's life IS one wild story... escaped from a biker gang and running from drug lords... used by the FBI and hoping to protect her present from her past... IT'S DARK - IT'S BRUTAL, and it's WORTH EVERY MINUTE OF IT!! (Mature read, 18+ for graphic sexual content and violence, including rape)