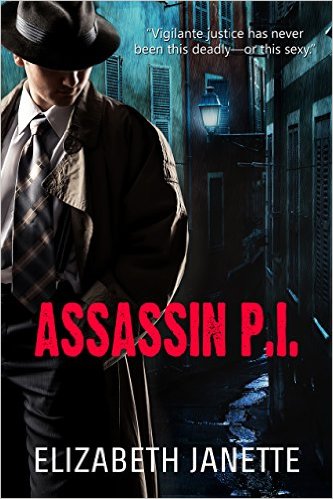 For a Private Eye like Jack Gaines, a man with old-fashioned morals and a wicked thirst for justice, being paid to eliminate bad guys has its perks. Nearly getting killed isn’t one of them. It’s enough to make Jack contemplate retirement in the Bahamas. But that’s before his ex-lover graces his doorway. One kiss is all it takes for Jack to postpone retirement and agree to take on her case: find and assassinate her husband’s killer.

It’s not the corrupt police force that he’s afraid of. Or the Fed hot on his heels. It’s her. She’s the only one with the power to bring him to his knees. And Angie’s harboring a deadly vendetta that threatens to destroy him like a bullet to the heart. Getting out of this mess (preferably alive) will take more than just his wits, good looks, and an arsenal of gumshoe novels.

Angie broke off the kiss and pushed away from him. “What are you doing, Jack?”

He grabbed her by the wrist and brought her back into his arms. “Making up for lost time. Doing what I should have done years ago.”

“You can’t go back and change the past, Jack. You broke my heart once. I won’t let it happen again.”
She was right, but when he was close to her, thinking straight was near impossible. There were a million and one reasons why he should walk away from her, from this case. He headed for the door and yanked it open.

“You’re right. You should leave.” It would kill him to see her walk out his door again, but it was the gentlemanly thing to do. He was giving her an out. One she would take if she were smart.

Angie lifted her chin defiantly. “Not until we talk.”

The tension was palpable. Jack let the door close and engaged the deadbolt. “Suit yourself.”

He strode across the room, pinning Angie to the wall. Tangling his fingers in her hair, he tugged her head back, leaving her silky neck exposed. God, how long had it been since he’d last been with a woman as tantalizing as her? He took a deep breath in. Her perfume beckoned him to take a taste, to throw caution to the wind and give in.

Throughout the day, Elizabeth Janette wears many hats: soccer mom, teacher, hula dancer, photographer, and romance writer. When she's not drafting fun lesson plans, she's dreaming up murder mysteries and love affairs to write about. Elizabeth's stories have earned her recognition as a finalist in the 2011 Dixie First Chapter contest and a finalist in the Indiana Golden Opportunity contest. Her debut novel, Redemption For Liars, was nominated as a finalist in the Romantic Suspense category as well as the Best First Book category for the 2014 National Excellence for Romantic Fiction Award.