Promo Tour: Strife of the Mighty by Julius Bailey

STRIFE OF THE MIGHTY 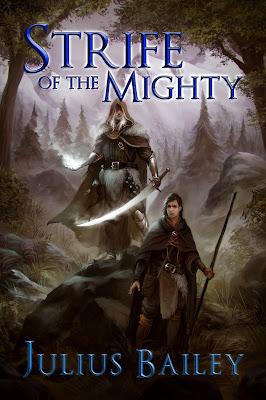 A HUSBAND. A LIQUOR LOVER. A STRANGER. THE DIREST ADVENTURE OF THEIR CENTURY.

For over fifteen hundred years the kingdom of Vrandalin has withstood the might of the one enemy they had need to fear. Now a new threat arises. In the southeastern part of the land, a grim-looking newcomer arrives in the village of Varalel, bringing with him a warning of imminent ruin. Shortly afterward, Varalel is stormed, its folk scattered, and one man is separated from the woman he loves.

Little else matters to Allon Bracken than reuniting with his wife. With nowhere else to turn, he must place his faith in a gruff, mysterious man he knows little of, and an unexpected comrade. But his road is a hard one, and will lead him into dangers and discoveries that will change everything.

It is likely safe to assume that the silver-haired man did not expect events to take such a swift turn when he hasted to Varalel with his warning. But there is no time to curse ill fate. Extenuating circumstances compel him to share Allon’s road—unless it is the other way around—but he quickly finds himself with another goal: the capital must be warned. An army out of legend stamps through the land, goaded by an age-old enchantress with designs of destruction. Time is short. But he must look to himself as well, for a hunted man is rarely at rest, and the terrible creatures that pursue him do not sleep.

And for a former traveling trinket seller deemed village ‘softhead’ by his peers, things are suddenly very horrible indeed. Or are they? It seems that chaos brings folk together. Joined to Allon’s path by an inner impulse, he discovers a companionship he did not expect to find. He will need it.

Enter Vrandalin; a land where ancient powers stir, dark beasts prowl, forgotten lore returns, and those who are thought weak discover their strength.

Brandegan quickened his run. Ahead of him the lights had begun to recede, melting into the night like wraiths. There were no more shouts either. All around silence again crept forward. Just before he could reach them, the last of the fires vanished. Brandegan was just about to dash after them, but something halted him. The heavy forestry round about was still, too still. Brandegan became aware of an intense watchfulness, and as he listened, a shroud of dread descended upon him.

Suddenly he felt, rather than saw, a shadow shift beside him. Next moment, he was hurled forward, heaved from the earth as though he was weightless, and tossed like a wind-blasted reed. Hardly had he struck the ground when a dark weight fell on him, crushing him down. He heard a snarl, and then four enormous claws, sharp as blades, raked his side. He fought back, lashing out with Rithlir, but a great, hirsute paw gripped his arm and, with a massive strength, pinned it to the ground.

Then Brandegan saw the eyes. Hovering just before his face, they shone as red fire, feeding the darkness with their terror and harboring within them the insatiable spirit of the Dread Palace. Even as they gazed down on their prey, the malice behind those eyes was kindled to sudden wrath, for here at last was their scourge, here at last was the thorn long sought.

But just before teeth as deadly as the edge of Rithlir found their mark, there was a dazzling flash. Shadows leapt up and fled, the darkness was pushed back, and in that moment Brandegan’s adversary was revealed. Greater in stature than any beast of the wild stood Daugruil. As other Gragmarr, his forelegs loomed up, broad and strong. His back, arching downward near his hind-legs, was covered in coarse, crimson fur, and his great muzzle was lined with dagger-edged teeth. Now he stumbled backward, thwarted from his intent by the blinding, silver flare.

Brandegan leapt to his feet as soon as the weight was lifted. His side throbbed in agony, and blood had already soaked through his raiment. But he heeded it not. The insatiable spirit of malice that burned in the eyes of this Gragmarr he knew.

✯✯✯✯✯There's a long historical background to the world of this book, full of names I can't pronounce and creatures I've never imagined before. The landscape changes as the characters take their journey. Cultures and characters change from place to place, and magic is everywhere. A fascinating read! The pace is steady, though there were times (during battles, mostly) when I couldn't put this book down without feeling unsatisfied. The highlights of this novel, for me, were the instances where the characters are able to interact without speaking, the parts that made me laugh (thank you Merch!).

My favorite character is Merch. His strength is born of love for his friends, which I admire. Allon is another favorite, mostly because of his appreciation & love for his wife.

PS. I purchased two copies as gifts and Amazon let me download the Kindle version for free because of that. Pretty sweet perk! Thanks, Amazon. =) (I don't know if 2 copies is the minimum for this deal). By Sarah on March 25, 2015 Verified Purchase

✯✯✯✯✯Strife of the Mighty: Book One of the Chronicles of Vrandalin has everything I expect from a traditionally styled epic fantasy. The story features dark beasts chasing the heroes, swords that may just be a bit magical, a journey fraught with danger, a little love, a little tragedy, and, of course, an epic battle to top it all off.

I love the pairing of two regular guys with the mysterious traveler. It’s always fun for me to follow the perspective of the unlikely hero, or heroes in this case. Allon and Merch were great, and Brandegan is the epitome of the timeless wizard or epic warrior, reminding me strongly of favorite characters from other fantasies I adore. Then again, I kept picturing them as hobbits tagging along after a ranger, though I think that was from more of a vibe than any particular feature.

The pacing of this story was great, fast when it needed to be fast, and slower when it needed to be slower. I thought the fights were pretty well choreographed and exciting. Danger seems to fade out, letting the adventurers get a little comfortable, and then there comes some kind of beast or other enemy. But what I liked most about these impromptu battles was how they all actually move the plot along. They all do in some way. Most in a big way.

Playing counterpart to the fights and chases, and like many of the more traditional fantasies, this one features fanciful detours into lore, poetry and song. I read most of them, but I must admit I skipped through one of the songs. It was nice that these little offshoots were in italics, easy to identify. I imagine some could be skimmed through, but I wouldn’t recommend doing so for those related to the history of the world; otherwise, you won’t know who or what’s important later in the book when the myths start getting a little less mythical.

Also like many stories in the genre, it has its fair share of words and phrases that I’m sure I butchered, but most weren’t too baffling. There’s a pronunciation guide at the back for those who like to be sure of such things, but I preferred to just wing it. And on the same note, the language starts off a little flowery and formal, as though trying very hard to proclaim, “I am fantasy.” Luckily, it didn’t seem to stay that way. I’m not certain if that’s because I got used to it or because it laid off a bit when the plot got going.

So, overall, I really liked this story. I’d recommend it for folks who like a good, solid traditional fantasy with plenty of adventure, intriguing characters and a well-thought plot. By Trish (I read too much!) on October 19, 2015 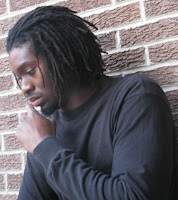 Adventurer, wonderer and wanderer, creative thinker and eccentrically unconventional, Julius Bailey tends to tread the peculiar paths. Born to the humidity, tropical sights, and gators of Florida, he lived in the Sunshine State for fourteen years of his life before moving to the rolling hills and red clay of Oklahoma. At the age of twelve he fell in love with a book called ‘The Secrets of Droon: The Hidden Stairs and the Magic Carpet.’ From thence his love of reading bloomed. Having taken a keen interest in the fantastical realms of Fantasy, his jaunts mainly focus thitherward. He currently resides upon a hilltop thronged with hilltops, and avidly welcomes communication from his readers.