Sometimes, the one thing you can’t have is the only thing you want.

That is exactly how Erin Slater has been feeling for a while—on so many levels. Sidelined in her career as a trauma surgeon; no longer welcome in her father’s home; being just Simon’s submissive, not the love of his life. What started out as her journey of self-discovery is looking more bleak now that the honeymoon phase is over and reality has come crashing in. That things between Jack and Simon seem to be smoothing out is the high note of her life right now—and that is, by far, not enough.

But she is willing to fight for what she wants—and she wants so much more. But when she gets it—will she be able to deal with it? 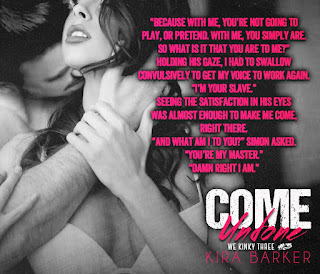 ADD it on GOODREADS / BUY it on AMAZON

Up front full disclosure—Come Undone is every bit as much of a wild ride as its series' predecessors, but ends at the edge of one hell of a cliff. Lucky for us readers, Ms. Barker is a fast writer who has already provided an estimated release date of February 9, 2016 for the final book in the series. That’s not too long to wait.

It has been quite the journey for Erin, Simon, and Jack. All three are individuals with strong personalities, each thriving on being selfish at times. But hey, don’t we all? Watching them grow, as people and as they try to make their uncommon relationship work, has been intriguing. Ms. Barker could’ve easily let the sexual side of this trio take center stage in the telling of this story, but no, she delves into the realistic hardships and rewards pursuing such a life can have. Add in meddling neighbors and a budding D/s twist, what you have is a page-turning (or swiping) mind boggle. At times each of the three main characters seem be their own worst enemy. At least until the outside world tries to stick their noses in places they don’t belong and you get to see just how strong this threesome unit really is when they rally.

I love how Barker tells it like it is, from butt plug farts to botched cupcakes to smoking hot sex scenes (both in and out of the playroom), Come Undone will leave your senses reeling.

*I was provided an ARC by the author in exchange for an honest review. Note to readers: this series should be read in order. 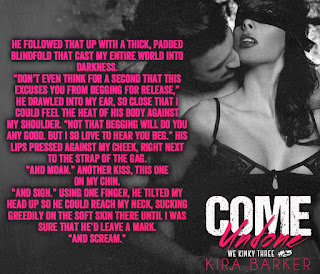 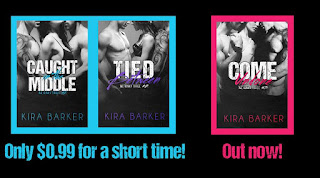