Tales of the Fifth Guardian; Book One: The Beginning

Tales of the Fifth Guardian is an adult Romantic Fantasy Adventure series with paranormal aspects and is based on the question: What if the descendants of the survivors of the island known as Atlantis lived among us in modern times with all the power and abilities of their ancestors?

The series is recommended for readers 18+ due to mature sexual situations, violence, and dark/trigger scenes. Book One is priced at 99 cents as an introduction to the series since they need to be read in order and every three full volumes I'm creating "compilation volumes" that are priced at buy two get one free in ebook and print. 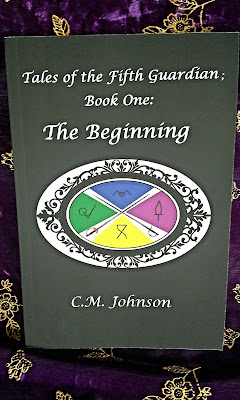 In Tales of the Fifth Guardian; Book One: The Beginning we meet the main character, Kerrisha Drew-Otlander and learn about some of her past. We are also introduced to the male main character, Kerreth and watch as Kerrisha shares the history of their people from him. Secrets are discovered and some are answered in Book One but nothing is as it seems and even the secrets have secrets. What if you were the one your people had been waiting for but no one believed you? 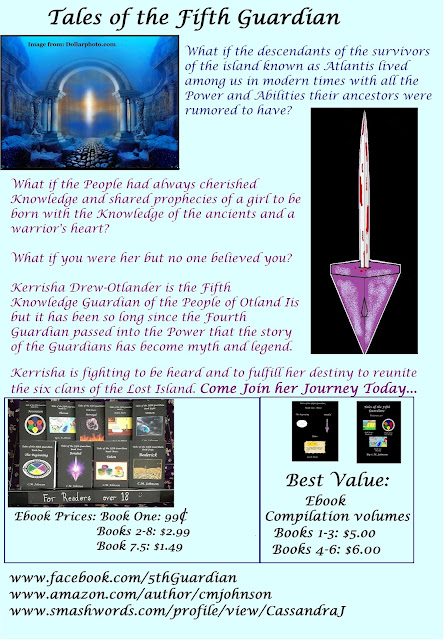 Bio (& a bit about the series) 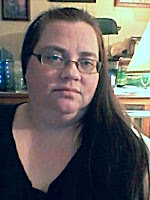 My husband and I moved back to Florida in 1995 when he was medically retired from the U.S. Navy. I returned to school in 2003 and completed my Bachelor's Degree in Elementary Education in 2007. I began writing Tales of the Fifth Guardian in 2009 and self-publishing in 2012. I found the Indie community on Facebook about a year later. I left education in the fall of 2013 to pursue my Master's in Accounting while devoting more time to writing. There are currently eight full length books (averaging 140,000+ words and one short story approx. 43,000 words). There are 12 full length books planned with another 2-3 short stories. I've also developed a language for the series and have created a dictionary.
STALK C.M. JOHNSON:
Facebook I Amazon I Barnes&Noble I
Smashwords I Twitter I Goodreads
Buy Signed Paperbacks/Swag

Kerrisha to the Otland Tower Council of Elders

“Now, you ask who I am; I have told you I am the fifth Knowledge Guardian of the People of Otland Island. It is my duty and my destiny to reunite the People and safeguard the humans. What am I? I am something that has never been seen before; I am the culmination of centuries. I am the last pureblood of my line. I am someone, I am something that will live for centuries and die a little every day. I will watch my children die, I will watch my grandchildren die, and still I will live on with my Blood-bonded mate, my perfect match. We will live together, work together, and fight together to fulfill our destinies every day. I am the last hope for this planet, for this world; if I fail in my destiny, if I fail to safeguard the humans, then the world will be ruled by the Lost Clans. It will not be ruled by those of us who believe in benevolence; it will be ruled by the Thorans, the Tinotchans, and the Devons. It will become a world of war, hunger, and deprivation. If I fail then we will all lose because I am the last hope.”

Tales of the Fifth Guardian is my chance to "geek out" at times. I've created a language, Otlantesha, for the series and include an ever-expanding dictionary & pronunciation key at the rear of each volume. However, I have more words than have been included in the story and have had the full dictionary to date printed in booklets. There is also an "ancient" version of the language - think runic in style and that is included in the dictionary as well. The fun part of this is that most of my characters cuss in Otlantesha so while I don't generally include anything worse than "sh**" or "da**" and the occasional "Bi***" my characters use stronger language in Otlantesha. Their biggest insult is to call someone, "Yo Punday Cracho (yo (/o/ as in low) poon-die cra-kho)" or "You stupid whale's a**" because they did not have horses on thier ancient island home. 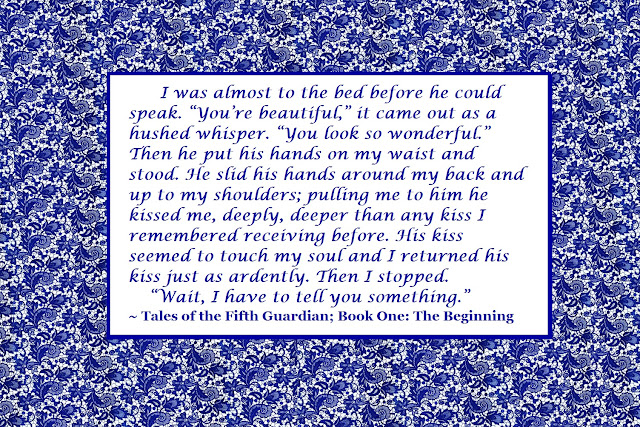 What is your favorite color socks to wear?
Black if I have to, but usually none - I live in Florida.

Do you wear boxers or briefs?
Women's briefs if the situation calls for full coverage or t-backs - I just celebrated my 25th anniversary, we need to keep things interesting somehow.

If you were a cookie, which kind would you be?
Macaroon

What was the best thing before sliced bread?

Since sliced bread was invented in 1928 one could argue that the automobile was however, if you look at the convenience aspect of sliced bread then I'd have to say moveable type since it placed books into more hands.

Tell me how many hats you have in your house?
Too many to count - my husband collects ball caps and has hundreds.

What is your favorite daily wear attire?
Skorts and t-shirts.

Which book is your most favorite ever?
The one book I literally read to death and had to buy a new one because it fell apart is "Flowers in the Attic".

Do you think people perceive you in the same way as you do? What do they see?
No, most people say I'm sweet and I do like to help but I think I'm pretty twisted at times, too. 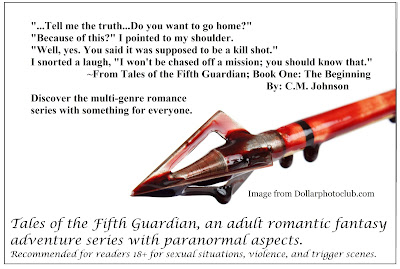