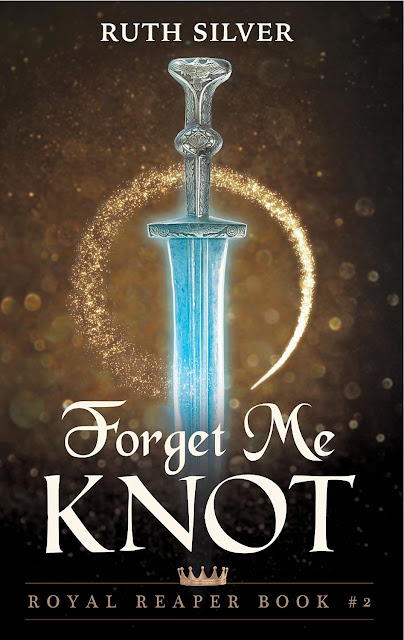 When Wynter explores his newly developed dark angel powers, regret soon fills his heart and mind. Saving a soul isn’t what he imagined it to be, and it puts the grim reaper he loves in grave danger.

Obligated to take the throne as Queen, Mara must face the truth and unravel secrets she may not be ready to accept.

The second book in the Royal Reaper saga takes you on a paranormal fantasy adventure into a world of grim reapers, dark angels, and undead trucidators.

“Reapers were human once. Young reapers still have their humanity, their innocence. It takes time to adjust to the idea of helping a soul move beyond this world to the next. Do you think it would be easy for a reaper such as your friend Leila to understand that there is a greater evil out there causing death?”

Wynter let out a heavy sigh. Leila. Why did it always come back to her? “So you’re telling me I can’t say anything to Leila about trucidators?” He still didn’t fully understand what they were. How could he tell her anything?

“It would be wise not to scare the woman you care for. It’s not as though she has the ability to see them, like we do. It’s rare for anyone else to see a trucidator.” Juliana gestured for Wynter to follow her into the kitchen. She poured water into the kettle from a jug and placed the pot on a grate above the fire.

Wynter shook his head, growing irritated. “You’re giving me bits and pieces. Nothing that I fully comprehend let alone can do anything with when it comes to knowing how to save a soul.”

“You’re still a child, Wynter. In terms of dark angel years, you were just born. Trucidators are frightening creatures. We barely have the ability to see them, and trust me when I say you don’t want to. They lurk in the shadows; they cause goose bumps in the dark. They’re the reason your hair stands up on your arms or you shiver for no reason.”

“Humans call them demons for lack of a better word. The undead prefer trucidators. They live in an existence between our world and the next plane. They have the ability to travel between the realms, marking lives for death. Usually the lives they mark are deserving of their destiny. Greater evil seeks evil, however, occasionally, trucidators choose a pure soul, and that’s where we come in.”

Ruth Silver is the best-selling author of the Aberrant trilogy. With a passion for writing and a love of story-telling, Ruth is actively writing two series: Royal Reaper and Orenda. She also writes The Federal Agent Chronicles, an adult romance series under the name Ravyn Rayne for Blushing Books. Her interests include traveling, reading, and photography. Her favorite vacation destination is Australia. Ruth currently resides in Plainfield, Illinois.