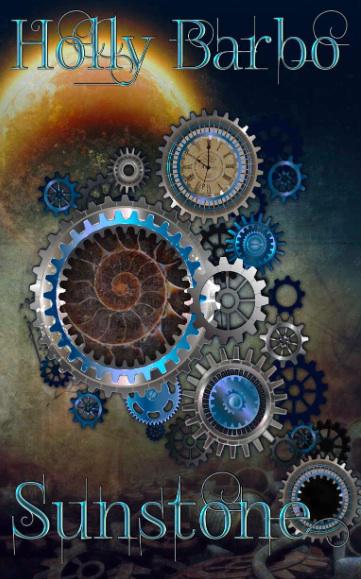 Before there was a history, the sun goddess Navora visited a moon within her realm that held primitive ocean life. She dipped her staff of power into the primordial sea and stirred. Pleased with what she had wrought, she departed, not at all troubled that a divine spark had touched two small dying sea creatures.

As centuries pass, life on the moon develops into a geothermal steam-powered industrial age. A triumvirate of politicians, banks and corporations bring strain and suffering to the masses they rule over. Unbeknownst to the people of the moon, there may be help. With the gears of time ever moving and trouble spiraling to a crisis point, can three individuals and a handful of fossils prevent a violent revolution?

Ravarian wiped the sweat off her forehead and peered out over the strait. Her grey eyes were clear and resolute. The clear day was warm and so beautiful that her heart filled with bittersweet joy. Grateful for this last gift from the Goddess, Ravarian pulled in her line and the small fish on it. Once it was stored in her cooler, she moved her boat again. No one watching her would be able to see when she palmed the fossil and let it slip beneath the waves as she pulled in her catch. Hours went by as she continued to cast her line.

Her task accomplished, Ravarian decided to stop performing for her watchers. Returning to shore with her cooler full of her catch, she was met by the young man she had rented the boa from. He grinned at her and the size of her haul. They bantered about her luck. She loaded her steam car to return home and smiled her good-bye. As the steam filled the chamber and she began to move, Ravarian gave a final salute. The lad laughed and way her away. When her vehicle crested the rise on its way back to the city, his face took on a serious expression and he returned to the hut. On his desk was the dash-key and, without wasting a minute, he tapped out his report and hit "send".

She was ready when the uninvited visitors came. Her mind was at peace. As she opened her door to them, she had the random thought that the police reports and newspapers would report her death as a victim of a brutal home invasion burglary. Ravarian was shoved into her living room as one of the men tore her pictures and books from the walls. The other set a bad down that clunked with ominous metallic sounds and approached her with the gait of a predator. She knew that the next few hours would be unpleasant for her and frustrating for her guests. No one would hear her screams. They wouldn't learn what they wanted to know, only enough of a story so they wouldn't go after her loved ones. This particular chapter of the Sunstone would close for now, but she was confident that the little fossils, there would be another day just as she know she wouldn't live to see the next sunrise.

The Founders ~ Divergent Paths ~ The Unraveling
The Reweaving ~ The Lost

Holly's world is shaped by her love of family, the beauty of the natural world and an irrepressible creative drive. She has always been curious and sees life through questions. These four characteristics color her writing voice. Holly's stories are mostly in non-urban settings and usually have some focus on nature, building discordant themes inside a seemingly peaceful refrain.

My motto: Weaving Alternative Worlds with Threads From Today.