Check Out This Hot and Sexy Book Trailer!
RUE Toulouse
by Debby Grahl
Sex, Love and Danger in The Big Easy!
Coming January 15, 2015! Available for PreOrder from  TWCS and Amazon

The next novel by Debby Grahl
Release Date: January 15 , 2014
Published by The Writers Coffee Shop 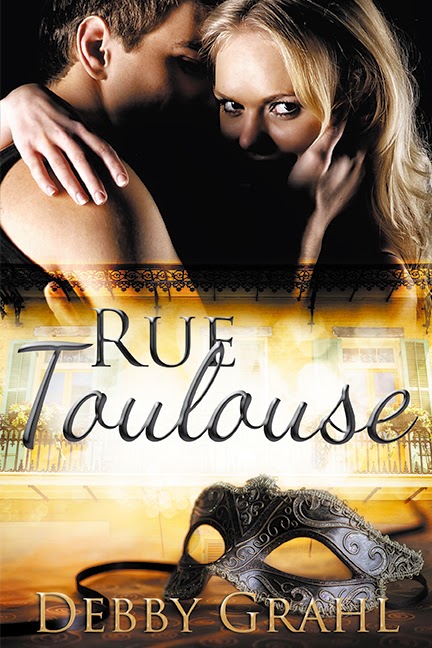 It’s Mardi Gras time in New Orleans. Attending a masquerade ball, wealthy fashion designer Caterine Doucette, dressed as a shimmering ice princess, has her cool façade shattered when she encounters Bayou-born ex-cop Remi Michaud, disguised as the darkly handsome pirate Jean Lafitte. Their true identities hidden, the princess and the pirate come together in an explosion of passion and desire. But when fantasy turns to cold reality, Caterine panics and disappears into the night, unaware this man will soon be sent to rescue her from a killer and will capture her heart. Orphaned at a young age, Caterine grew up in the home of her beloved grandmother, Miss Dauphine Doucette. Despised by her Doucette relatives for the devotion she received from her grandmère, Caterine suffered years of envy and disdain. The young Caterine learned quickly how easily the love she had to give could be thrown back in her face. After Miss Dauphine turns over ownership of the century-old fashion house, Ma Chérie, to Caterine, an attempt is made on her life, for there are those in the Doucette family who will stop at nothing to possess what they feel is their rightful inheritance. Not knowing whom to trust, Caterine goes into hiding. Miss Dauphine, convinced someone in her own family is behind the attack, hires Remi, now working for a private security company, to track her down and unmask her would-be assassin. Learning that the affluent Caterine Doucette is the beautiful princess he held in his arms at the ball, Remi is torn between his growing desire for her and painful memories of another rich socialite’s betrayal. Caterine finds herself falling in love with Remi, but old embedded pain leaves her afraid to open her heart. Down in the Big Easy, Caterine and Remi must learn to trust one another if they are to survive in a world of family greed and ruthless revenge.

Debby Grahl lives on Hilton Head Island, South Carolina, with her husband, David, and their cat, Tigger. When she’s not writing, she enjoys biking, walking on the beach, and having a glass of wine at sunset. Her favorite places to visit are the Cotswolds of England, Captiva Island in Florida, New Orleans, New York City, and her home state of Michigan. She is a history buff who also enjoys reading murder mysteries, time travel, and of course, romance. Visually impaired since childhood by Retinitis pigmentosa (RP), she uses screen-reading software to research and write her books. Debby belongs to Romance Writers of America, Florida Romance Writers, Hearts Across History, and Lowcountry Romance Writers. Her first novel, The Silver Crescent, was released January 2014.