Friend and fellow author N. Wood is back with a new m/m novel.
Before we get into the book details,
lets learn a little about Ms. Wood with a wacky Q & A . . .


1) If you were a cookie, which would you be?
Hmm, I would have to say my favourite cookie from Subway – white chocolate and macadamia nut.

2) What is your favorite daily wear attire?
I really can't leave the house without a hat otherwise I feel naked. At the moment, my favourite is a black baseball cap with a silver skull and crossbones on the front. I bought it during Pirate's Day at Land's End in Cornwall, UK.

3) Do you speak with your dog?
All the time! I should be more worried if either of them answer back!

4) What kind of music do you like?
Rock mostly, but I'll listen to a bit of everything to try it once. I like a bit of Ska, some Indie, even one or two pop songs.

5) If given complete freedom to start afresh, what profession would you choose and why?
I've always been more of a dog person than a cat person and would love a profession centring around dogs. My dream job would be training and handling sniffer dogs in airports, jails, and mail sorting offices.

6) Which is your favorite time of the day?
Night, roughly between 10pm and 2am because that's the quietest time in my house and leaves me with the freedom to write to my heart's content. I can't focus to write when there's background noise. Even the TV or some music playing is too distracting for me to concentrate on writing.

7) Name one actor/actress you would love to get naughty with?
Mmmm – Jackson Rathbone!

8) How many pairs of shoes do you own?
Three. A pair of plimsolls for beach walking, a pair of trainers for everyday wear, and a pair of boots for winter.

9) Do you know how to drop an egg onto a concrete floor without cracking it?
Hard boil it and then peel off the shell.

10) Why isn't the number 11 pronounced as onety one?
Because a lot of people will misunderstand you when you say onety-six. 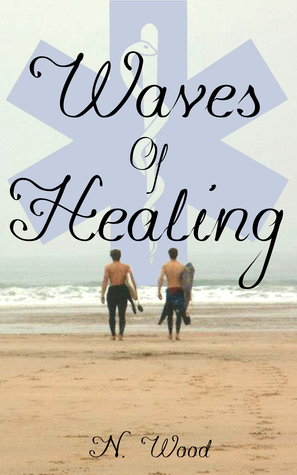 Waves of Healing by N. Wood
Amazon UK I Amazon US I Goodreads

Joel Ritter had the career he always wanted, teaching others to surf the waves in the same way he learned to in his teenage years. Instructing and guiding his students through surfing competitions had long since been his passion, but an unfortunate car accident one winter's night in Cornwall turned his whole life upside down and dashed his ambitions.
Dominic Thornton endured school in Joel's shadow, following his crush around like a lovesick puppy. Now as a twenty-nine year old paramedic, Joel's life and his future rests in his hands. Can he guide the disheartened surfer through his recovery and prove to him that there is still a love and life to live for without losing his own faith and belief in Joel in the process?

The boys appeared to be oblivious to the fact their instructor was standing among them while they gathered their towels and toiletries. Joel turned his brown eyes to each of them, noticing how two of the seven in his team held glum expressions from the results of the contest, whereas the other five didn’t seem to care. When the first few walked towards the showers, he couldn’t take their ignorance any longer. Joel released his grip on the clipboard and threw it across the room with such force, it snapped in two against the door. The ensuing bang followed by the splintering of wood was enough to shock the seven teens into silence and draw their attentions to the red-faced man standing among them. The two that had approached the shower room stood frozen in place, having almost jumped out of their skins when the clipboard had missed them by an inch. All eyes turned towards Joel with puzzled expressions. He’d never been so infuriated with them in all the time he’d coached their surfing careers. The recent act of violence had stunned them, but not as much as his words would.

“What in the flying fuck was that?” he yelled, adding emphasis to the swear word.

Joel turned his glare on the one who had spoken. The youth was of a similar height to him and their eyes locked onto each other’s with ease. At six foot two inches, Joel had once been a skinny teenage surfer like all of the youngsters, but now at almost thirty, he trained them instead while surfing recreationally for his own habits. He had worked as an instructor in Cornwall, England for people of various ages over the years, but Godrevy was where he’d chosen to set up his business. The beach was just a small section of three miles of golden sands, and the sea swell was a good spot for learners and experts alike. However, just because Joel was young and athletic like them didn't mean he would take shit from his team.

“Calm down? Don’t you dare tell me to calm down! Look at you all, so laid back and uncaring that you just got your arses whipped by the Aggie boys!” He glanced to every face in the room while expressions turned into grimaces and pouts in response to his declaration. Mark Shaw and his St. Agnes team weren't just his rivals. The two boys still near to the shower room door hurried to park their butts on benches when Joel pointed for them to do so. Following suit, the others sat also and hung their heads in shame. Now he had their attention, Joel pressed his hands to his hips and took a more threatening stance. “Thanks to the stunts you all pulled out there today, congratulations are in order. Well done! You've just made yourselves a laughing stock!”

The boys lowered their heads further while he lectured them for several minutes, sometimes pacing, other times gesticulating when his pent up frustrations were released with ground out words. All of the youths understood Joel meant business, and he scrutinised them with a fierceness while he spoke, though he had to keep reminding himself that they were just teenagers who cared more about getting drunk and lucky later on than the competition, whether they won or lost.

Joel gazed over to the youngest member of his team, Jason. At only sixteen, he was already a very promising surfer. With him being beneath the legal drinking age, much of his time was spent in the water when the swell was decent enough. Now he sat quaking with small tremors of nervousness while Joel chastised them.

Jason’s blond hair was soaked and limp across his face, dripping water into eyes bluer than the sea. With his wetsuit peeled down to his waist, goosebumps littered the youngster’s torso and the chilled air had caused his nipples to stand erect on his hairless chest. Joel had to remind himself that while the boy was just about legal, he was nearing thirty and that would be seen as wrong.

He continued to lecture them for a few minutes longer, aware from experience that their arses were probably numb from the hard benches that lined the clubhouse walls, and all of them were shivering from being wet in such cold conditions. Pulling his beanie from his head, Joel ran his fingers through his hair while he came towards the end of his scolding.

“Now, you guys had better get your arses into gear or you can kiss any chance of a sponsorship goodbye.”
Though he considered his words to be harsh, Joel knew they had to understand they couldn't let great opportunities like that slip through their fingers if they wanted to succeed and become pro surfers. They were all capable of far more than they’d shown out there in the sea today. With a last look around the miserable faces in the room, he noticed many were studying their feet. Only one was staring straight back at him.

The youth stood up, his face devoid of emotion. “Boss?”

The other teens in the room turned their heads to catch a glimpse of the brave soul who had dared to address their instructor following his outburst of anger towards them. His name was Shaun; a big boy of eighteen years old and another of Joel’s promising wave riders. He stood before them all with one hand clutching a towel at his hip to keep it from falling. The thin and fluffy fabric was all he wore.

Glancing each side of him to the teenagers in the room, Shaun then levelled his eyes back on Joel and flew his other hand to his groin, cupping himself through the towel and gave a tug. “Suck my cock.” 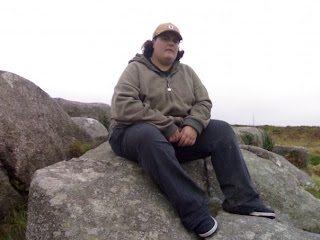 Where to find Ms. Wood:
N. Wood is a budding young author living in Cornwall, United Kingdom. She first gained an interest in writing when she became a published poet at the age of nine. Since then she's moved onto both short and novel length fiction with a M/M romance baseline.