Sixteen-year-old ghost hunter, Emma Hoffman thought that moving into an old Victorian was going to be awesome-- ghosts galore.

Much to her delight, she discovers that the house is haunted—not by a ghost, but by a construct (a spirit created to be a servant). As she gets to know Marcus, the construct, he asks her to help him avenge his maker and find her killer. Emma’s not too sure this is a good idea, she’s a ghost hunter after all, not a detective, but she agrees to help him anyway.

While trying to discover more information about the killer, Emma begins to have feelings for Marcus- feelings she isn’t ready to admit. Then the sorcerer who killed Marcus’s maker shows up at Emma’s house with an insane plan to capture Marcus and absorb his power- Emma isn’t having it. Marcus is hers.

When the killer performs a spell that begins to steal Marcus’s life force, Emma risks losing him. It’s a race against time for Emma to figure out how to stop the sorcerer and his spell before Marcus fades away and disappears from her life forever.

I grabbed my book bag from the bottom of the staircase and headed off in the direction of where I thought Dad’s home office was. This house was so much bigger than it looked on the outside, but then, the way the yard was, you didn’t see how far back the house stretched into the backyard. The hallways were twisty and seemed to go in all directions. I felt like Alice in Wonderland fighting her way through a maze. I looked for anything that could be a hidden passage, but there was nothing; all the space was accounted for. It figured. But still, the walls felt like they were getting narrower. It was odd.

Finally, I knew I was near the office, but somehow, I’d gone down the wrong branch of the hallway. This hallway was darker than the others and only had one door at the end. My fingers tingled with excitement. Who knew what was on the other side of that door.

I tried the old brass knob. It was unlocked. After opening the door, I stepped inside. It took a moment for my eyes to adjust. Colors of covers burst from the bookcases surrounding me like a multifaceted stone. It seemed to twinkle in the light streaming into the turret window. I’d never seen a library like this. It was the best library ever.

My friends back in Florida always thought I was weird for liking libraries. Yeah, I had an e-reader, but I loved the smell of a book. I liked holding the book as I read. There was some sort of connection I felt with a book if I could touch the paper. Holding a mini-computer just wasn’t the same.

This library was the type you’d see in old movies. Large windows that stretched from the ceiling to the floor, built-in bookcases of dark wood that lined the walls; filled with leather bound tomes no one had read in years. I was in Heaven.

I remembered the day we moved in that Dad had said something to the movers about keeping books. I thought he’d been talking about all of the books in his office, but maybe he was talking about these.

I dropped my book bag by the door and wandered into the room. I felt a reverence here. The room smelled faintly of incense and old books. It was perfect. I set my muffin down on a small table that held only a lamp and ventured further where I promptly bounced my shin off a low sitting coffee table.

After hopping around looking like a wounded duck, the pain calmed down and I limped over to the first bookcase. I let my fingers dance on the spines of the book. Some of them were the classics— Dickens, Hawthorne, Poe. Others, however, were in languages I did not know. Some of them were Spanish, which I could read. I‘d have to ask Dad about the others.

I moved from bookcase to bookcase, looking for something that I just had to read right now. It would be silly to enter a library and not find something to read. When as my eyes settled on an old book whose title had been worn off the jacket, I felt a cold chill creep down my spine. I knew it wasn’t cold in the room, hell it wasn’t cold anywhere in the house. I slowly turned towards the window.

Standing in front of the window was a guy. I hadn’t heard anyone come in, and I would have. The floor creaked slightly when you walked across it. I looked away and then looked back. He was still there. That was when I noticed that he was just slightly transparent. I could faintly see the cross bars of the window through him.

I wanted to run and get my camera, but I was afraid that by the time I got it and turned back around, he’d be gone. Who was he?

He turned his head toward me. That was when I noticed he was dressed in clothes like the ones I’d seen in history books of people from around the turn of the Twentieth Century. He stared at me. His eyes were bright green, almost startling in their clarity. His hair was brown and curled just slightly around his ears.
Simply put, he was beautiful.

He continued to stare at me. His eyes had a sadness that made me want to do something, anything to take the pain away. I shook myself. No, it wasn’t a power he was transmitting. There was something about him that struck a chord with me.

I realized I’d been staring at him so long, I hadn’t even blinked, and when I did, he was gone.

I knew I hadn’t imagined him. If I had, that was one hell of a dream.

I walked across the room, grabbed my muffin from the table and walked to the door of the room. I looked back. There was nothing there. My mystery man remained hidden. I snatched my book bag from the floor and went back upstairs to my room. I would have to start being more careful. At the very least, I should be holding my cell phone so I could snap a quick picture. It was stupid of me to not be prepared. Dumb me had left my backpack on the floor by the door. I at least should have taken the camera out of it.

Now, I knew my house was haunted. But by who, that was the question.

Danielle DeVor spent her early years fantasizing about vampires and watching “Salem’s Lot” way too many times.  After living briefly in Baton Rouge, Louisiana, she moved back to her hometown to write.  When not writing and reading about weird things, you will find her hanging out at the nearest coffee shop, enjoying a mocha frappuccino.

GIVEAWAY!
Click HERE for your chance to win:
$10 Amazon Gift Card and
Miranda’s Book of Spells used to create Marcus. 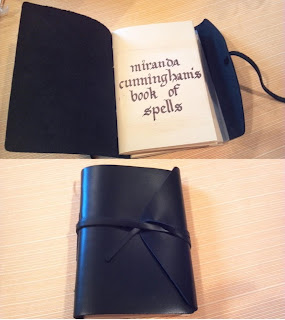