Wow, loving the guest stops that are rolling in!  Remember, if you're an author looking for a host, please don't hesitate to click over on the "Want to be a guest?" tab to get the details and send me your goodies! All genres welcome! Speaking of interviews, I made my own stop over at N.Wood's blog today to discuss my novella, Sugar & Spice. You can read it HERE.

Without further ado, allow me to welcome my verbose head editor at Renaissance Romance Publishing and fellow author here to talk about her novella My Apple Tree:

We'll start with the fun stuff – the random questions!
1. If I gave you an elephant where would you hide it?
In an elephant factory.

2. Name one actor/actress you would love to get naughty with?
David Tennant, in a heartbeat.

3. If I came to your home and looked inside the refrigerator, what would I find?
Jimmy Hoffa and the Holy Grail. Possibly an apple or two.

4. How many pairs of shoes do you own?
Two. A pair of Doc Martens and that other pair of shoes I swear I have but can never find.

6. What was the best thing before sliced bread?
Knives, I would imagine.

7.  Why isn't the number 11 pronounced as onety one?
I don’t know, but it probably has something to do with why 10 isn’t pronounced onety.

8. Which is the one television character that you simply adore?
The Tenth Doctor from Doctor Who (or the Fifth… or the Eighth… or the Ninth...)

9. What kind of kid were you, naughty or nice?
I was happy, outgoing, and well behaved. My mother still can’t figure out what happened.

10. Are you a morning person or a night person?
What is this “morning” of which you speak?

So, I'm going to go out on a limb here (hehe... did you see what I did there?) and guess that you are a Dr. Who fan? Fantastic answers, Elizabeth. Now let's dig a little deeper into Lawrence's psyche and get to know more about her book, shall we? 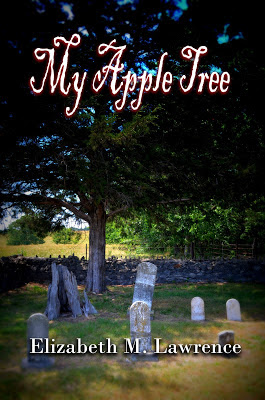 Book summary/blurb:
David Cleary and Katie O’Connell had the perfect love. When they are separated by tragedy, David is devastated and refuses to move on — until he meets Emily “Mel” Wallace. Gun-shy Mel understands how a heart can break in the aftermath of violence. Although neither of them want to love again, the attraction between them is difficult to resist. David wants to keep Mel safe, but first he will need to risk his heart.

Excerpt from My Apple Tree:

His first thought, when the haze of desire had lifted and they lay out of breath and exhausted, was to wonder what the hell was going on between them. They both were trying to recover from their past experiences with love, and neither wanted a new relationship. So why the hell were they unable to keep their hands off each other?

When David managed to drag himself away from her and they had both gotten dressed, Mel followed him out to his car. He paused before opening the door to brush his fingertips along the curve of her cheek with a smile. She took a deep breath as if she was summoning her courage and spoke. “David, we can’t see each other again.”

She shook her head. “It’s no use. I don’t know what it is between us, but we can’t seem to be able to be in the same room together without this happening. I just can’t do this. I’m too afraid that I’ll wind up falling for you.”

She just gave a helpless shrug, the wounded expression in her eyes sending a stab of guilt through him. They stood awkwardly facing each other, both uncomfortable and thinking things that they lacked the courage to say. At last, taking a deep breath, Mel spoke.

Oooh, what a place to leave it!  So, Elizabeth, can you tell us why you wrote My Apple Tree?

Anyone familiar with the Celtic ballad “I Am Stretched on Your Grave” will recognize it as the source of my short story’s title. Even so, it may not be clear why I chose to single out that particular phrase and work it into the text itself. Before I begin, some of the actual lyrics to the song are as follows:

Cheery, ain’t it? I normally hesitate to post lyrics because the power (in my opinion) lies in the marriage of words with music. Any reader who wants to read the full text can Google it, but I would recommend listening to Sinead O’Connor’s version, which is available on YouTube. It’s a more complete experience.

I liked the image of the apple tree because it’s a source of shelter, nourishment, and stability in the song, and that perfectly mirrored the childhood friendship with which I begin my story. In the song, the speaker identifies his lover as his apple tree, almost as if it is a term of endearment. This also appeals to me because it says so much more about their relationship and his feelings for her than a more typical “darling” or “dear” or “sweetheart.” This is an endearment from a man who really sees the woman he loves – he has taken the time to identify her role in his life and why their relationship is so essential to him. If he called her “honey” or “babe,” I doubt that the listener would feel the same piercing agony and sorrow when he describes how he mourns her loss.

Everyone has mourned the loss of something or someone. It is one of the impermeable truths of life. Any change we experience is a sort of death, whether it is the end of a phase in one’s life or the passing of a loved one. People fear change, just as they fear the unknown. This song throws that frightened reluctance into sharp relief. Here we see a man who is determined to cling to his lost love. He refuses to move on, and can only imagine finding peace again once he joins her in death. We can feel his resentment that he continues to live and the unwanted solitude and isolation of his grief has overshadowed every other aspect of his life. He does not apologize for it; on the contrary, he wears his desperation like a badge of honor.

It would be all too easy to brush aside this overblown display as teenage angst if it were not for those simple words he gives her: “My apple tree.” It is there that we feel that perhaps he is justified in clinging to her memory as he does. What would otherwise appear morbid and self-indulgent is changed with those words into a love that shines with reverence and loyalty and pure devotion. We can believe that death will bring him peace, just as we know he will not seek it out prematurely. He would not choose to destroy something she loved – not even himself.

It leads us to wonder whether someone this fundamentally (and justifiably) wounded could ever recover. Can you recover from losing someone who is your heart, your home, your touchstone, and your guide? In exploring this question, it was necessary to make the nature of what my protagonist has lost absolutely clear to my readers. That is why, when it came time to select a title, I could not think of anything more fitting than the words that so simply cry out, “She was my everything.”

Wow, I'm speechless and taking a moment to reflect. With a build up like that, I can't imagine anyone not needing to get their hands on a copy of My Apple Tree at once! 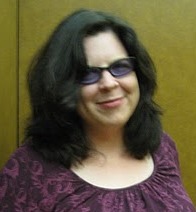 Author Bio
Elizabeth Lawrence is the author of both contemporary and period romances. Each book incorporates its own unique blend of humor and reverence. In addition to her novels, Elizabeth serves as Lead Editor for Renaissance Romance Publishing. A lifelong writer and former paralegal, Elizabeth divides her free time between her husband and two sons, her three cats, her collection of cozy murder mysteries, and her mildly severe caffeine addiction. A native of Lawrence, Kansas, Elizabeth now works from her home in Cleveland, Ohio.
Where you can find Elizabeth M. Lawrence: