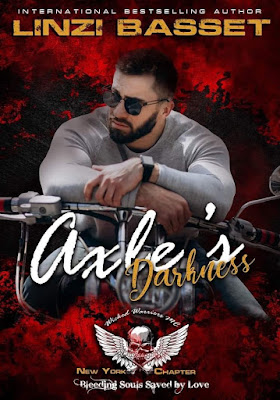 I’m Axle Santiago, aka Rage, aka President of the Shadow Warriors of the Wicked Warrior MC New York Chapter. I rule with an iron fist and I don’t think twice to swing my chain when the need arises. If it connects and splatters brains on the tar, chances are, the bastard got what he deserved. Things are changing and with it comes new challenges.

Our territory was invaded by MC Demon Riders vying to overthrow our rule. They overstepped boundaries and when their VP had a hand in me being locked up… they declared war.

When I’m released two years later, the time for retribution has come.

Slick and the bitch by his side who betrayed me is going to pay. Lilian Calvert… the one who turned my soul dark two years ago and left it brooding in a dark cave, is going to feel the wrath of Rage. I’m going to take my revenge on her body and use her like she did me. I won’t be asking, and no amount of begging or wishes are going to change my mind.

Lilian and her lover are about to learn that Axle Santiago never makes promises he doesn’t keep. But even well laid out plans backfire. Something I learn during one magic midnight ride with her.

Be sure to join the Facebook Group to stay up to date with cover reveals, new releases, and general carousing as this amazing collection of Wicked Warriors MC & Fabled Mafia Wars fable retellings is unveiled: https://www.facebook.com/groups/bleedingsoulssavedbylove