Snowball–an aptly named bundle of feline fluff–is thankful to be spending her first Christmas in the comfort of Weber Haus, the Victorian B&B run by Miss Tilly. Emily Diemer, who cooks for the guests, dotes on Snowball, but she’s not thrilled about another new arrival at the B&B: Miss Tilly’s nephew, Lukas. Which is odd, because Snowball’s animal instincts tell her that Lukas and Emily should definitely be friends.

Everything Emily needs is in this quaint community–including, she hopes, the chance to open her own bakery one day. She doesn’t think much of Lukas for leaving his aging aunt to struggle while he jets around the world taking photographs. But now that he’s here, helping to spruce up the property and getting mixed up in Snowball’s antics, she begins to soften a little. Until she learns what he has planned…

Lukas is going to sell Weber Haus so that Miss Tilly can retire. But Snowball is certain that this B&B, and these people, are supposed to be her forever home. Somehow she has to get these stubborn humans to see things through the wisdom of a cat’s eye and a kitten’s loyal, loving heart…

At her car, her good mood took a back seat to frustration. The fob on her key chain was dying, which meant it didn’t always let her in right away. After four or five clicks, she finally gave a grr of annoyance and opened the door with the key.

No mistaking the deep voice of the man from the parking lot. No way could he be talking to her, though, so she went to get in.

He is talking to me.

Surprise tinged with more delight than she’d let herself acknowledge had her pausing to look over her shoulder. “How did you know my name?” she called as he jogged down the last few steps.

He waved back up at the slope. “That man called your name earlier.”

And he’d paid attention? Wow. A blush warmed the skin of her cheeks, making the sting of the cold air against her bite more. “Listen, I’m flattered and everything, but I’m running late.”

He paused on a word, mouth open, then his eyes crinkled as he grinned. “I’m not asking you out.”

Oh. Disappointment dropped over her like snow falling off branches on her head. Kerfloop. Followed swiftly by embarrassment. The heat crept back up her cheeks, but for a much less fun reason. “Okay . . . What can I help you with?”

Help her? With what? She raised her eyebrows in question.

“I believe you’ve picked up a small passenger in your purse.”

“My—” Realization rushed in with all the subtlety of a blizzard, and she closed her eyes in resigned horror. “There’s a kitten in my purse. Isn’t there?”

She opened her eyes in time to catch the full impact of her stranger’s full-bodied laugh, his eyes alight with humor. “Does this happen to you often?” he asked.

“Only since this one arrived on our doorstep.” More gently than she’d been handling it until now, she swung her purse around and opened it wide. Sure enough, two blue eyes stared back at her with all the innocence of angels.

“Snowball. You’ve got to stop this,” she admonished as she lifted the small kitten out. Cuddling the ball of fluff against her chest, she lifted her gaze to her helpful stranger. Right in time to see him with a camera up to his eye. A soft click sounded as he snapped a picture.

“Uh— No, thanks.” She lifted a hand to block any more.

“I’m only getting the cat in the shot. I promise.”

Zero for two. First, he wasn’t chasing her down because he was interested, and now he only wanted pictures of the cat. My ego is going to need some chocolate therapy if this keeps up. 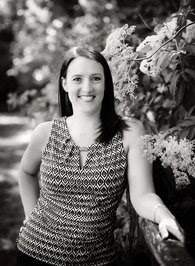 Sweet contemporary and Amish romance author Kristen McKanagh grew up consuming books and exploring the world through her writing. She attempted to find a practical career by earning a degree in English Rhetoric (Technical Writing) and an MBA. However, she swiftly discovered that writing without imagination is not nearly as fun as writing with it. Kristen also writes award-winning steamy contemporary romance as Kadie Scott, and award-winning paranormal and YA fantasy romance as Abigail Owen. No matter the genre, she loves to write happily-ever-afters that shine with home, heart, and humor. Kristen currently resides in Austin, Texas, with her own swoon-worthy hero husband and their two children, who are growing up way too fast.