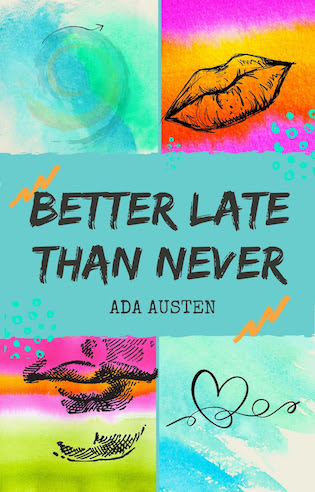 Better Late Than Never – A Second Chance Seasoned (over 30) Romance set on the Beaches and Boardwalks of the New Jersey Shore.

Checklist for Best Romance Novel Ever

✓ BFF does not get left behind!

✓ A dress with working pockets!

✓ Toast to Girls Night Out!

✓ Toast to Damn the Patriarchy!

Checklist for Best Couple Ever

✓ She’s devoted to her BFF and her Art.

✓ They’re working together to raise their teenager.

Checklist for Best Hero Ever

✓ He makes a gift for her BFF!

✓ He’s sweet at that Time of the Month!

✓ He buys her a Romance Novel!

✓ He takes as long as she needs!

Carrie’s a passionate artist and a Jersey Girl with seawater in her veins. She makes her art from the treasures she collects each day, walking the beaches of the New Jersey Shore.

Manny’s an architect and college professor. An Apache Native from New Mexico, he’s more at home in the mountains, but he moves to the Jersey Shore to be a better Dad to their teenage daughter.

Carrie’s Jersey. She doesn’t do calm. Manny’s quiet and takes his time to react. They were college sweethearts. Now, they’re strangers, each remembering the past differently.

Manny discovers his new boss wants to tear down Carrie’s house. Carrie will blow the roof off herself if she finds out. Manny must keep it from her, but there’s another secret that she’s been keeping from him. What will it take for them to learn to trust each other?

Together they will redefine the meaning of love, family and home.

A feel-good standalone story of multicultural romance with adult sex, realistic cursing, a bitch of a heroine, Jersey sarcasm and your next book boyfriend!

Content Warning: There is mention of a sexual assault.

She needed coffee. She needed coffee bad. The sun was pouring into the windows, way too bright and cheerful. Carrie heard no sound of Manny, so she put on a robe and crept into the kitchen, as quiet as possible. She could see the couch from her little kitchen. She tried hard not to stare, but the sight of his bare chest above the sheet, his long black hair hanging down across it, made her gasp. It was just a tiny gasp. She hoped he hadn’t heard it. That chest! She turned around and measured the coffee grounds, her hands shaking slightly. There were tattoos on that chest she had never seen. She turned around and took another peek. He was stirring. She looked away again, back to the coffee. Oh, that chest! It needed careful study. There was just so much more of him now. He was so filled out, so much a man. That chest needed to be above her while she studied it. She wanted to feel him against her. She would press her face above his heart.

His hands on her shoulders made her jump and cry out.

He laughed. “Sorry,” he said, letting go as she spun around. “I was just going to say good morning.”

He stopped smiling when he saw her face. She knew she was staring. She knew she was probably, as Emily would put it, pathetic looking, staring at that broad chest, so close to her, she could smell his scent. Pathetic in her flimsy, old ragged torn lace robe, full of holes. Pathetic, because she knew he could see her nipples beneath the lace. Pathetic because she could not stop her hand from reaching out to trace the lines of his bare tats. His skin was hot. So hot, so warm from sleep. 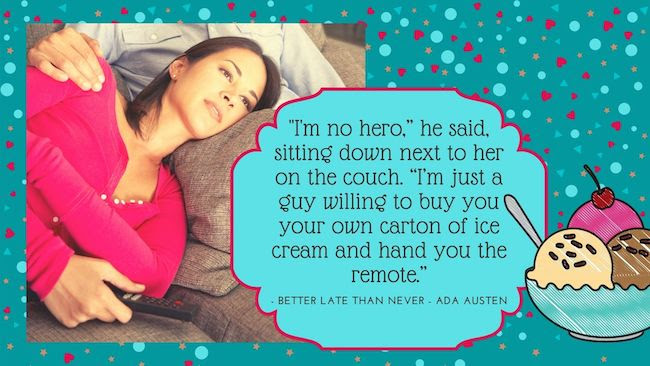 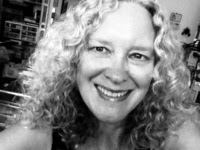 Please visit my website www.AdaAusten.com for the latest updates and to join my mailing list.
My novels are all full stand-alone with beginning, middle and end, (no cliffhangers). I believe in Happy Ever After endings.
Ada Austen was born a Jersey Girl. She has lived in Monmouth County, NJ beach towns from Atlantic Highlands to Belmar. She currently lives in a small coastal city on the New Jersey shore called Asbury Park, and never plans to leave. ​She walks daily at the ocean, collecting shells, beachglass and stories.
Ada's first novel, Helping Each Other, was published in October 2016. It is no longer in print, but she plans to release a revised edition someday. Her second novel, Better Late Than Never, is targeted for October 2020 release. She's now working on her third novel, Boardwalk Ice which is set in Asbury Park. She's targeting a 2021 release.