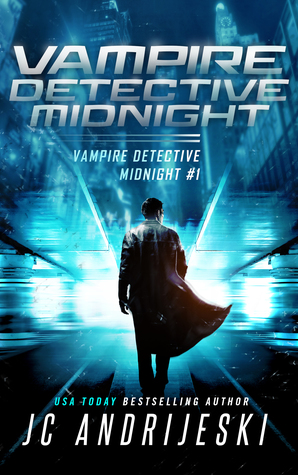 Vampire with a past and homicide detective, Naoko “Nick” Tanaka just got transferred to the NYPD, where he works as a “Midnight,” or vampire in the employ of the human police. Like all state-registered vamps, he gets his food delivered to his door, lives in government housing, and basically can’t sneeze without the U.S. government knowing about it.
Still, he’s determined to play by the rules. More than anything, he just wants to be left alone, to finish out his immortality in peace… but he’s barely there two weeks when things already start to go sideways.
It starts with a weird case involving inexplicable paintings that predict murders before they happen.
Between his mystery painter, a bunch of dead hybrid-humans, a conspiracy involving the richest families in New York, and a school principal who has an unsettling effect on him, Nick finds he can’t get personally uninvolved with any of it.
Instead, he gets sucked in even deeper, until he’s pretty sure he’ll end up forcibly reprogrammed by his human masters — assuming they don’t just rip his heart out of his chest and be done with it.
VAMPIRE DETECTIVE MIDNIGHT is book #1 of a gritty, romantic new series set in a futuristic, dystopian New York, involving vampires, humans and psychics trying to rebuild their world after a devastating race war that nearly obliterated all of them.

Goodreads / Amazon
—
EXCERPT:
He needed to feed.
It was putting him in a foul mood.
That, and all this fucking blood…
Nick frowned, staring around at the alley floor.
It hit him again.
There was something wrong with this blood.
It smelled too fucking good.
It smelled way too fucking good.
That couldn’t all be Nick’s hunger.
“Anyway, that’s what I can tell you so far,” he said, making his voice deliberately casual. “Without knowing who the victims are, or what brought them to this alley, it’s pretty hard to speculate on motive, but…”
Nick hesitated then, realizing something.
Frowning, he stepped closer to the pools of blood.
Nose wrinkling, he crouched down so he could smell it from closer, even though the scent was overpowering, even from a lot further away. Taking a few full whiffs, he felt his fangs begin to extend in earnest.
That time, he couldn’t pull it back.
A flush of heat hit his gut and chest, burning in his throat. It was intense enough, he almost got hard, but he’d gotten pretty good at squelching that reaction, too.
He stood up at once.
Really, he lurched back.
It happened so fast, that smell and his reaction to it, Nick forgot to modulate his body’s natural reflexes to accommodate the people around him. He was up and moving in a heartbeat, darting back in pure instinct, without slowing his movements at all.
He moved fast enough to make the humans around him freeze.
Instantly, they turned into prey.
Ignoring them, and ignoring their deer-in-headlights reactions to how he’d just moved, Nick backed away from the pool of blood with a scowl.
He backed away from the human detectives and tech team, too.
“They’re hybrids,” he said, emotion reaching his voice.
He turned around, staring at the humans sharing the alley with him.
The stared back at him, faces blank, eyes holding flickers of fear.
Frustrated, wanting to smash through that frozen prey look, Nick let his voice turn into a harder growl.
“Jesus fucking Christ,” Nick said. “Did you hear me? They’re all fucking hybrids.”
When they still didn’t speak, he averted his gaze with a scowl. His eyes returned to the alley. Staring around at all of that blood, it sank in what it really represented.
Once it had, he couldn’t help but feel sick. 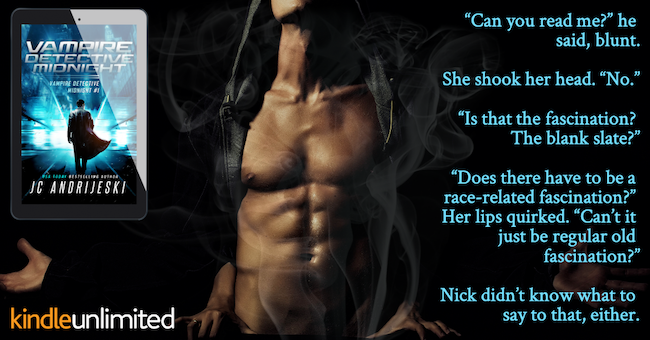 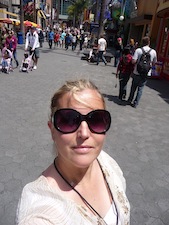 
JC Andrijeski is a USA TODAY and WALL STREET JOURNAL bestselling author who writes paranormal mysteries and apocalyptic fiction, often with a sexy, romantic and metaphysical bent. JC has a background in journalism, history and politics, and loves martial arts, yoga, meditation, hiking, swimming, horseback riding, painting… and of course reading and writing. She grew up in the Bay Area of California, but travels extensively and has lived abroad in Europe, Australia and Asia, and from coast to coast in the continental United States. She currently lives and writes full-time in Bangkok, Thailand.
Current series include: Vampire Detective Midnight, the Bridge & Sword series, the Quentin Black Mystery series, The Morph series, and the Alien Apocalypse series. She’s also written a number of standalone novels, novellas and short stories, as well as nonfiction articles and essays.