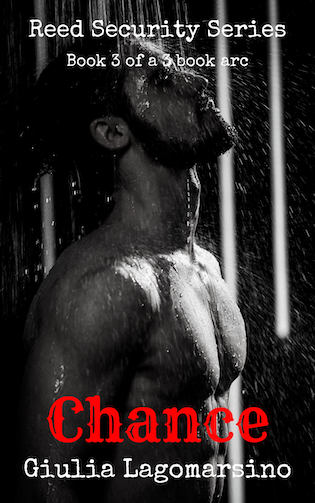 Chance is book 15 in the Reed Security Series and should be read in order. It is also part of a 3 book arc. Sniper and Jackson need to be read first.

Chance was taken when Reed Security was attacked, but he has no idea who has taken him or why. Over the course of a year, he plans his escape, knowing there is one person on the island he won’t leave without. But torture breaks every man eventually and he doesn’t know if he can make it until the end.
Morgan made a deal with the devil to get her daughter back and finds out too late that it was the wrong choice. Held captive with a man that is obsessed with her, she has to find a way to convince him that she loves him. But will she actually fall for him? And if she does, where does that leave her with Chance?
The men and women of Reed Security won’t stop until one of their own is back home. They’ll never give up, and this time, they’re out for blood.

I'm a stay at home mom that loves to read. Some of my favorite titles are Pride and Prejudice, Harry Potter, Lord of the Rings, and Horatio Hornblower. I started writing when I was trying to come up with suggestions on ways I could help bring in some extra money. I came up with the idea that I could donate plasma because you could earn an extra $500/month. My husband responded with, "No. Find something else. Write a blog. Write a book." I didn't think I had anything to share on blog that a thousand other mothers hadn't already thought of. I decided to take his challenge seriously and sat down to write my first book, Jack. I was surprised at how much I enjoyed writing. From there, the stories continued to flow and I haven't been able to stop. I hope my readers enjoy my books as much as I enjoy writing them. Between reading, writing, and taking care of three small kids, my days are quite full.
Website / Goodreads / Facebook / Twitter