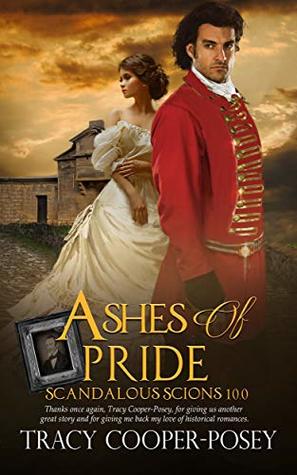 Married in haste, to the wrong man…
Blanche wed Lieutenant Colonel Seymour in search of a hero to replace the French military father she never knew, only to find herself stranded in Northumberland, in a penniless marriage, with no recourse.
Blanche’s cousin, Neil Williams, now a decorated Major, returns from the colonies to rejoin the Fifth Northumberland Fusiliers. Her husband, as Neil’s superior officer, makes Neil’s life intolerable, as well as her own. Blanche learns that the truly courageous are defined by their actions and that Seymour is not one of them, for what he does to Neil defies imagination…
This book is the tenth book in the Scandalous Scions series, bringing together the members of three great families, to love and play under the gaze of the Victorian era’s moralistic, straight-laced society.


…and more to come!
A Sexy Historical Romance

Goodreads / Amazon / Barnes & Noble / iBooks / Google Play
—
EXCERPT:
Neil shifted on his chair, sitting back, drawing attention with his movement. Blanche’s gaze swung to him. Her lips parted. Her eyes widened. Joy spread across her face.
Neil felt a jolt at the pure pleasure in her eyes. Why could she possibly be so glad to see him? Of the five, Neil knew Blanche the least. Her company had always irritated him, for she ran hot and cold in fits and starts, which made her uncomfortable and unpredictable. She was not like Alice, who could be counted upon to be sunny and happy, no matter what.
Yet Blanche was tugging at her husband’s sleeve now with firm insistence. She murmured in his ear.
“Williams, you know Mrs. Seymour?” Edmund Hunter asked.
“Blanche is my cousin.” Neil realized he was smiling, too. He didn’t bother with the convoluted explanations about adoptees and honorary cousins. He got to his feet as Seymour brought his wife over to the table, his gaze on Blanche.
He realized he was just as pleased to see her as she seemed feel about seeing him.
“I had forgotten about that extended family of yours,” Captain Long said, on the other side of the table. “Everyone in William’s family is related to just about everyone who counts,” he added to Lieutenant Roberts, the last man at the table.
“Just about? Make that everyone,” Tom Penny said. “Didn’t you hear? Innesford married the Gainford heiress earlier this year.”
Neil ignored their gossip and watched Blanche, enjoying the sight of a beautiful woman moving. She had the grace and elegance of true European women, who seemed to be born with the knowledge.
“Neil! Oh, Neil!” she breathed, stepping ahead of her husband, her gloved hands coming up. She reached up on her toes and kissed the air by Neil’s cheeks, while Seymour’s eyes bulged. “I heard you were heading back home, but I didn’t think you would arrive for weeks, yet!”
Neil caught at her elbows, steadying her. “Hello, Blanche. It is wonderful to see you. You are the first in the family I have seen since I got back.”
As he spoke, everyone scrambled to their feet to salute the senior officer.
Neil followed suit, while Blanche smiled up at him.
Seymour acknowledged the salute, letting everyone relax.
Blanche turned back to Neil. “You are the first in the family I have seen since before Christmas…oh, Neil!” Her smile trembled and her eyes glittered.
Neil’s chest tightened. Blanche looked as though she was about to cry. The Blanche he knew, the little he did know of her…that woman did not cry. She laughed. She raged. She pouted and stomped her foot. She did not cry. She was too busy sailing through life and sampling all it had to offer to bewail her fate.
Blanche made a soft sound and put her arms around Neil’s neck and hugged him.
For a moment, shock froze his thoughts. He smelled her scent—something spicy that had nothing to do with flowers. Her hair brushed his chin. Heat registered through the slippery satin. Slenderness, too. And a soft roundness he had not enjoyed in far, far too long…
“Oh, dear!” Penny murmured, sounding shocked. Major Hunter smiled indulgently and didn’t bother looking away.
Seymour’s expression grew dark and thunderous.
Neil caught at Blanche’s arms, trying to draw her away from him, good sense returning with a crash.
She stepped back swiftly and put her hand to her mouth. “Oh, please forgive me,” she said to the table. “It has been so long since I saw Neil…I mean, Major Williams.” She gave a small grimace of apology and rested her fingers on Seymour’s arm. “Husband, may I introduce to you my cousin, Major Neil Williams, of Innesford.”
“Cornwall?” Major Hunter said softly. “That Williams?”
“The very one,” Captain Long replied.
Neil saluted. “Lieutenant Colonel.”
“At ease,” Seymour said. “I’ve heard a little about you, Williams.”
Neil let his posture relax. “Sir.” Now the man was closer, he could see he was very young. Possibly younger than Neil. His pale hair was baby-soft. So was his chin.
Seymour’s eyes narrowed. “You’re out of uniform, Williams.”
Neil glanced down at his out-of-date red coat. “I haven’t had time to—”
Seymour glanced at Edmund Hunter. “Major, as Provost Marshall, it is your duty to attend to such slovenliness. Dock the man two shillings a day until he represents the Regiment properly.”
Hunter straightened to attention. “Yes, sir.”
Blanche’s eyes grew larger, as she looked from Neil to her husband.
Two shillings! Neil gritted his teeth. It was an exorbitant sum, especially as the regimental commander was aware of the uniform breech and was willing to tolerate it. Only, Neil could not argue with a senior officer and he was out of uniform.
Seymour glanced around the table of officers, possibly taking note of who dared dine with the slovenly Major. He curled his hand around Blanche’s arm and pulled her away. “Gentlemen,” he said. 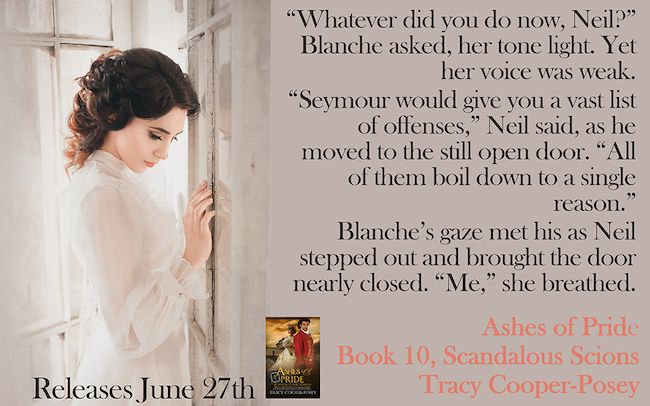 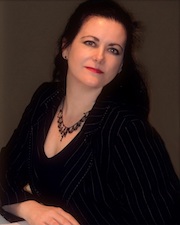 Tracy Cooper-Posey is a #1 Best Selling Author. She writes romantic suspense, historical, paranormal and science fiction romance. She has published over 100 novels since 1999, been nominated for five CAPAs including Favourite Author, and won the Emma Darcy Award.
She turned to indie publishing in 2011. Her indie titles have been nominated four times for Book Of The Year. Tracy won the award in 2012, and an SFR Galaxy Award in 2016 for “Most Intriguing Philosophical/Social Science Questions in Galaxybuilding”. She has been a national magazine editor and for a decade she taught romance writing at MacEwan University.
She is addicted to Irish Breakfast tea and chocolate, sometimes taken together. In her spare time she enjoys history, Sherlock Holmes, science fiction and ignoring her treadmill. An Australian Canadian, she lives in Edmonton, Canada with her husband, a former professional wrestler, where she moved in 1996 after meeting him on-line.
Website / Goodreads / Facebook / Twitter