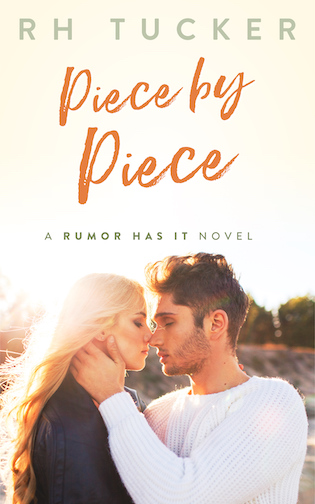 Everything can change in an instant.
They say you don’t know what you have until it’s gone, but the truth is, sometimes you know exactly what you have. And when it’s gone, you start to fade away, too.
Taylor Hopkins knows this firsthand. For the past couple of years, he’s focused on only three things: college, working out, and girls. School to focus on the future and forget the past. Exercising to zone out and clear his mind. And girls for all of the above. Then Sasha falls into his life …
Sasha Williams loves to cook. Skipping her second year of college to work under a head chef and owner of a restaurant was an opportunity she couldn’t pass up. After yet another breakup with a guy still hung up on his ex, she decides a night out is the perfect thing to wash away recent memories, and make sure her focus is on cooking. Of course, it doesn’t help that meeting Taylor, and a subsequent deal between them, turns into something she never thought she’d face.
While trying to break down walls, Taylor and Sasha work to come to terms with a future between them. But can you build a future on a foundation that continues to crumble away?
Piece by Piece is the fifth book in the Rumor Has It series and can be read as a stand-alone.

Goodreads / Amazon
—
EXCERPT:
… It’s what I’ve been working for. Even though I still want to finish school and get my associates degree, I know I want to get my foot in the door with personal training.
Thankfully, Becky walks through the door, nothing but skintight yoga pants, a white sports bra, and grinning widely at me. I don’t date, but if there’s a girl that I’d call a constant in my world, it’s Becky. No fuss, no muss. We keep it clean, with no strings attached.
“Hey, Taylor,” she says with a smile.
“What’s up, Becks?”
Leaning against the counter, her breasts are on full display; she doesn’t have to try very hard to flaunt them. They’re fake, but hell if I care. “How about that raincheck tonight?”
I groan. “Can’t do it tonight, heading out of town.”
Her exaggerated pout makes my eyes find her lips. “You’re no fun.”
“How about tomorrow night? Cal and Ethan are celebrating.”
“Oh.” She perks up with excitement. “Celebrating what?”
“They’re branching out. Cal’s finally opening up his own place.”
Eyeing me carefully, she looks around, dropping her voice. “Oh, are you gonna be joining them?”
“Not sure yet. Cal says it’s an open invitation, so we’ll see I guess.”
Leaning closer, she licks her lips. “You should. I’d love some more one-on-one time with you.”
“Oh, I don’t see that being a problem, no matter where I’m at,” I answer, lifting a brow. “You still have my number?”
“Of course.”
“Hit me up tomorrow, and I’ll tell you where we’ll be at tomorrow night.”
Her eyes linger on me as she walks into the gym, behind frosted glass doors. Micah chuckles behind me.
“Seriously, if there is anyone that you might as well just date, it should be Becky. I actually think she’s starting to like you.”
“You’re crazy.”
“Seriously.”
“Come on, Micah. She knows the score.”
He shakes his head, shrugging. “Okay, but don’t say I didn’t warn you. Would you ever think about trying something with her?”
I quirk an eyebrow at him. I know exactly what he’s talking about, but I don’t feel like having an honest conversation right now. “As a matter of fact, Micah,” I pause, making him give me a suspicious look, “there’s a whole lot of things I’d still like to try with her.”
He starts laughing. “And on that note, I’m gonna clean the locker rooms. Freak.”

RH Tucker lives in Southern California and writes character-driven stories with people who have real heart. At least, he tries to. He also consumes too much caffeine, eats too much pizza, and firmly believes Rocky Road is the best flavor of ice cream.