Get out of Hell free card? Not for Callie Delgado, Gem City’s newest soul charmer. Sin and salvation collide in this gritty and action-packed urban fantasy.
Callie’s magic is finally her own. She and Derek dispatched Ford. They should have been able to breathe, but layers of sin run deep beneath Gem City. Another mob boss quickly rises, and his sights are firmly set on Callie—and her family.
Mobile soul rental shops begin to bite at the Soul Charmer’s business. His retribution is wicked, but the blowback threatens to crush Callie. If she can’t maintain the tenuous balance of souls in Gem City, more lives will be lost.
Only the more magic she uses, the more danger finds her. A break-in, pools of blood, and bare shelves at the Soul Charmer’s store force Callie to choose the fates of others. But which can she live with? Losing her city, her love, her family …or her very soul?

Goodreads / Amazon / Barnes & Noble / iBooks / Kobo
—
EXCERPT:
“I’ve worked security at four other buildings.” Benton held up as many fingers. His nails were short and black. Whether from blood or dirt, Callie didn’t care to guess.
She stood behind him and leaned forward to speak into his ear. Stale cigar stench clogged her nose. “You’ve worked jobs, but haven’t paid the Soul Charmer.”
Benton surged closer to the bar. His whiskey sloshed over the lip of the glass and onto his fingers. He slammed his shoulder backward and shifted to face Callie. The wide, milky eyes and taut tendons in his neck eased. Idiot. He licked the spilled liquor from his fingers. “I have experience, but they still won’t even let me take their exam.”
She gave two fucks about his ability to get a job. “That must suck. You owe the Charmer.”
“What do you mean?”
That’s not how this worked, and he knew it. “Cash or souls.”
“I ain’t got anything on me.”
“How are you paying for that Wild Turkey?”
Benton shot scattered looks in either direction. “It just you?”
It was, and normally she hated that. Her boyfriend Derek typically made these collection calls. He looked the part. Hulking and covered in leather and scars. She hid her wounds on the inside, and wielded dark eyeliner as war paint. Not exactly scary mofo material. Callie needed more from Benton than a simple rented soul, though, and that information need to be acquired alone. 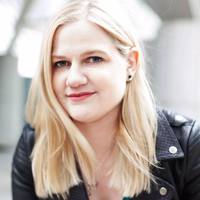